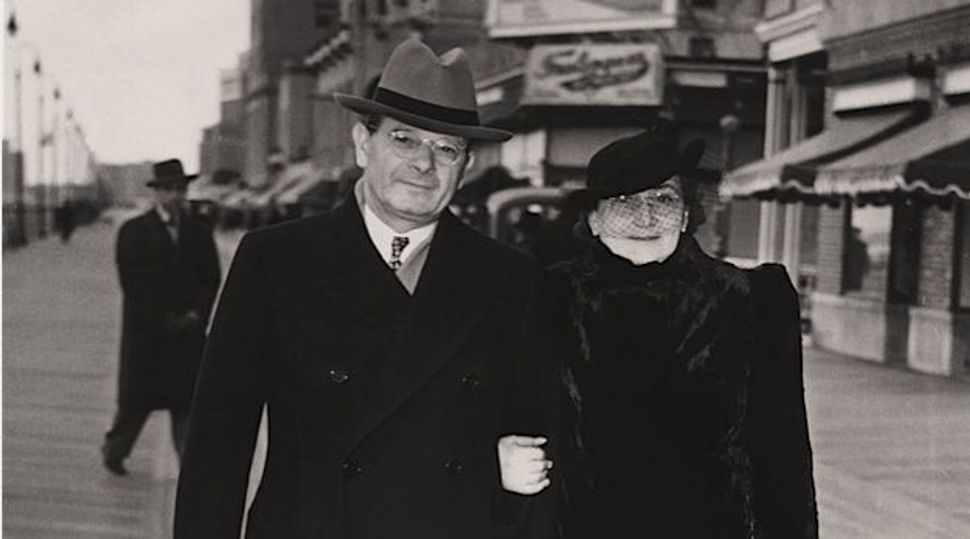 Bessie Hillman and Sydney Hillman on the boardwalk in Atlantic City, New Jersey, in 1938 // Forward Association

Although better known as the tireless wife of labor leader Sidney Hillman, who founded the Amalgamated Clothing Workers Union, Bessie Hillman was an activist in her own right.

She was known as ‘Sister Bessie,’ a name thought given to her by southern textile workers she helped organize and who were enamored of her. In an apocryphal tale, Hillman was speaking at the Union’s southern convention in 1946, following her husband’s death. Long considered an unorganized territory, the South became part of her responsibilities when she was then appointed Vice President of the Union. Addressing the convention hall filled with women garment workers, a largely Christian crowd taken to wearing crucifix necklaces, folks back East at Union headquarters worried about how this Yiddish accented speaker, a foreign born Jewish woman, would be received.

They worried in vain—with her Yiddish accent and her reported Yiddishe mame style — she electrified the crowd. Not long into her speech, the crowd shouted itself hoarse crying out ‘Sister Bessie’ from the floor. Their attention was so rapt, a pin drop could be heard. These southern Christian women, hailing from Georgia, Alabama and Mississippi applauded her words, and blew kisses at ‘Sister Bessie.’

In his memorial essay in the Forverts about her, Y. Fogel recalls meeting Bessie Hillman at a prior convention in Atlantic City, where this photo from our archives was taken. In particular, he savored the memory of their wide ranging discussions, having been seated together at the same table. He recalled her as a deeply intelligent woman engaged with the American and Jewish labor movements, having personally experienced each stage of the Union’s development. She was one of a very few women married to labor leaders, he noted, who forged their own working relationship with the Union as they entered widowhood. She was thought to have been married twice — once to Sidney Hillman, founder of the Amalgamated and then to her second love — the Union. She was geknipt un gebundn, he said, interwoven with and fully satisfied by both her shidukhim.

An immigrant from Grodno, Lithuania, Bessie Hillman left an Eastern European life of pogroms and an oppressive Czar, having witnessed the formation of the Jewish Labor Bund in her hometown and the failed first revolution of 1905. She began her American working life as 16-year-old Bessie Abramowitz, a button sewer, and organized the women in her first sweatshop job Chicago, where she recalled being paid 2.5 cents an hour for a 60 hour work week. For her organizing efforts, she was placed on the infamous blacklist of union activists, and had difficulty getting hired.

In Chicago she met her future husband during the historic tailors’ strike at the Shaffner and Marx shop in 1910. It was fateful on both a personal and professional level, as this strike led to the founding of the Amalgamated Union in 1914. Two years later, they were married and she soon began her long career, organizing with shirtmakers, cleaning and dye Workers. She was known for loyalty, drive, humility and the willingness to perform the more menial tasks of organizing, despite her husband’s top position in the union.