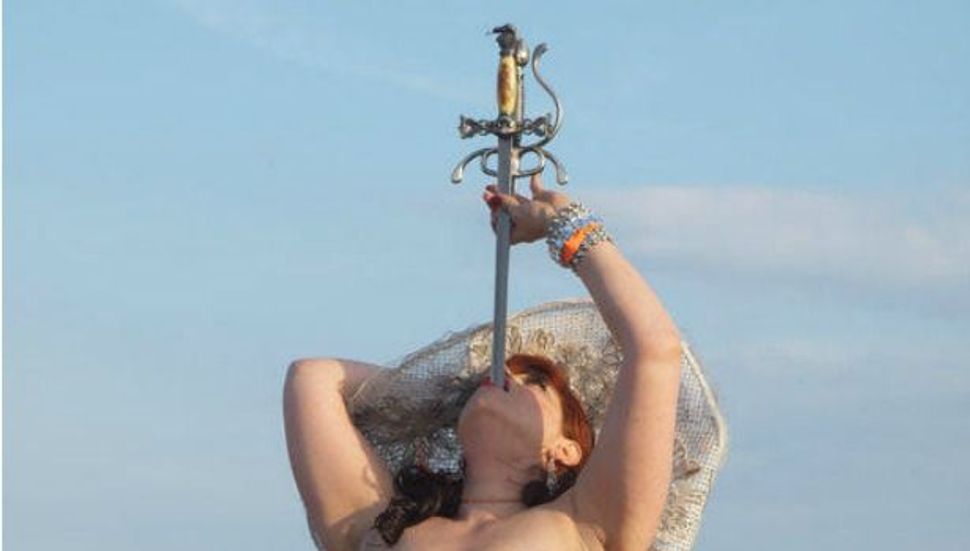 The Lady Aye from Jewish Daily Forward on Vimeo.

“For me a lot of the skill is not so much in shocking the audience — it’s in building the suspense,” explained Ilise S. Carter, a professional part-time sword swallower in New York who performs under the name “Lady Aye.”

And it’s true. Most of us react with shock and amazement when we see someone sticking a sword down his or her throat. But the spectacular part only takes a couple of seconds. Most of her time on stage, Carter tries to connect with the audience and create the tension that will turn her working act into a memorable experience.

“I’m one of the world’s very few female sword swallowers,” is one of her opening lines. That’s also true. According to Dan Meyer, president of the Sword Swallowers Association International (yeah, that’s an actual organization), this rare and potentially life-threatening practice is still part of a male-dominated business. The SSAI estimates that only 15% of the few dozen professional sword swallowers are women.

What’s more, Lady Aye is a minority within a minority. Based on my research, she is the only female and Jewish sword swallower in the U.S. (But it’s difficult to confirm the exact numbers of such an offbeat occupation.)

Carter grew up in a “nice Jewish family” on the Upper East Side. (Everybody in her family is a doctor, which might come in handy). Growing up she never felt “a great physical connection” with her body. “I had a lot of body issues,” she said, “for a long time I wished I could just be a brain in a jar.” But “becoming a sword swallower for me was very self-esteem building because I have this relatively rare skill that’s the result of great discipline.”

Carter was hesitant to tell me how exactly she learned to swallow a sword. The only detail that she was willing to reveal was that she consulted with a gentleman named Ward Hall, King of the Side Shows and his partner C. M. Christ on a trip to Tampa. After her return she still had to overcome months of fear before she could even start rehearsing. The rest is a trade secret.

But, after filming Carter as the Lady Aye at a burlesque show on Coney Island, I’m actually not sure whether the line between her person and her persona is as clear-cut as she claims, and I first thought. Watch (above) and decide for yourself.