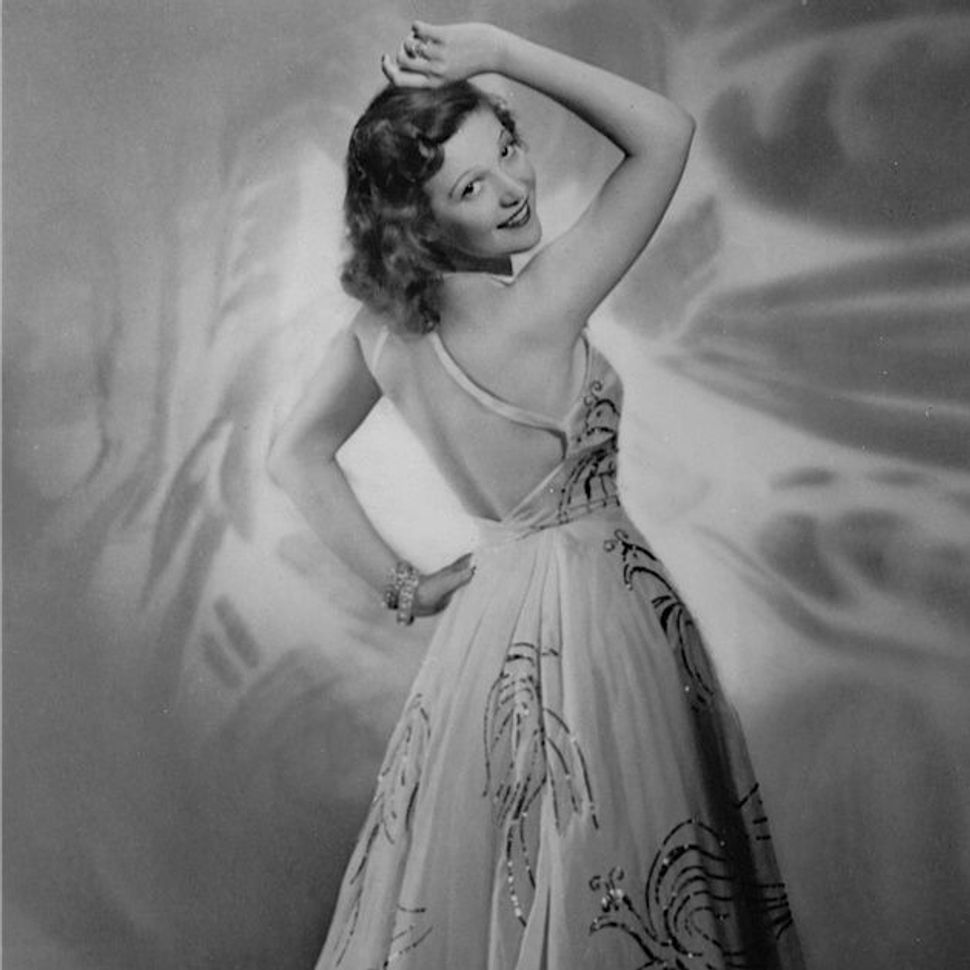 The influence of Poland’s national waltz, the Polonaise, on music is so widespread that musical notation uses the term alla polacca to indicate that specific rhythm. Its popularity helped it spread to composers across the world; even America’s John Philip Sousa composed a piece entitled “Presidential Polonaise.”

Waltzing through the file drawers of our photo archive this spirited image of Budapest-born Jewish film actress Marta Eggerth, the soprano sensation of Vienna’s light opera of the 1920s and 30s, emerged. And we found her impossible to ignore, sheated in a hot sequin bird patterned gown for her role in “Polonaise.”

Expatriated by 1938, thanks to Hitler’s Anschluss of Austria, Eggerth and husband, Polish Jewish tenor Jan Kiepura decamped for the United States. Here in New York City, Kiepura joined the Metropolitan Opera and Eggerth merged her talents with Broadway and film musicals remaining, reportedly, under recognized. Molded by Vienna’s operetta scene, she was unable to compete with the rise of hip new musical film stars of the era, such as Judy Garland and Gene Kelly with whom she was once paired in a supporting role in 1942. With most of her numbers cut from that film, and Garland said to have even copied Eggerth’s large operatic gestures for a satirical bit, Eggerth self-exiled again back to theatre.

The Forverts picked up the threads of her career reporting on her leading role in the New York City debut of “Polonaise,” a musical, in October 1945. Excitedly, the Forverts discussed the major artists involved in the production including former “baby-ballerina” of the Ballet Russes of Monte Carlo, Tatiana Riabouchinska, who would dance in it, and “movie star” Jane Farrar acting in a lead role. Based on Chopin’s waltzes, etudes, mazurkas and sonatas, the Forverts detailed how the play would feature a troupe of 125 actors, singers, dancers accompanied by an equally vast orchestra under the direction of fellow Polish exilee, Bronislaw Kaper, best known for his later scoring of the 1965 remake of “Mutiny on the Bounty” and the television series “The F.B.I.”

“Polonaise” was to be a historical-musical-theatrical evoking the life of Polish General Tadeusz Kosciuszko, hero of Poland’s early struggles for independence, fellow emigree, and superstar of America’s own revolution. Acclaimed in Hartford, Baltimore and even Washington, the Forverts breathlessly reported that they played to record-breaking packed houses. Advanced sales tickets were selling out for the New York City debut at the Alvin Theatre on West 52nd Street, currently home to the Neil Simon Theatre.

Perhaps influenced by current events of 1945, the play was said to have focused on Kosciuszko’s return home to Poland and not, as may have been expected, his outstanding role in Washington’s army. The pages of the Forverts in October 1945 spoke of heartbreak and despair across newly liberated Eastern Europe. A huge ad on page 3 of the October 1st edition decried the re-opening of Berlin’s Opera House while Jewish victims languished stateless in DP Camps. Throughout the month, the Forverts published a listing of survivors recently found in Lodz, Poland. And on the front page of October 2nd they published the eyewitness testimony of a Romanian Jewish doctor at the Lueneberg, Germany trial of 45 Nazis, of the unfathomable murder of 80,000 Lodz Jews during one night’s hell at Auschwitz.

The classifieds drew readers back to the ever present need for employment, with jobs as “dessert makers, and laundry workers, no experience needed, must speak English” offered at Schrafft’s on West 23rd Street.

Despite Eggerth’s peppy allure, her will to waltz along, and a strong pitch emanating from the pages of teater velt, the Forverts’ theatre page, “Polonaise” seems to have slowed to a dirge after opening night and no further reviews were published in the Forverts. Undaunted and energetic, Eggerth eventually returned to concertizing and a long and rich artistic life in song, until her death in New York City in 2013 at the age of 101.

And as for Chopin’s polonaise — Polish director Andrzej Wajda’s distressingly poignant 1958 film “Ashes and Diamonds” depicting Poland’s struggle for its post-war identity, scores a final scene with the Polonaise in A major, also called the “military polonaise.” There the music punctuates a scene depicting an assortment of louche and corrupt attendees at dawn after an all night banquet as they drunkenly squeeze out one last waltz for themselves in celebration of the new regime. They lurch along seemingly unable to absorb what fresh hell awaits them with the sunrise.