A Farewell to Parenting Columns 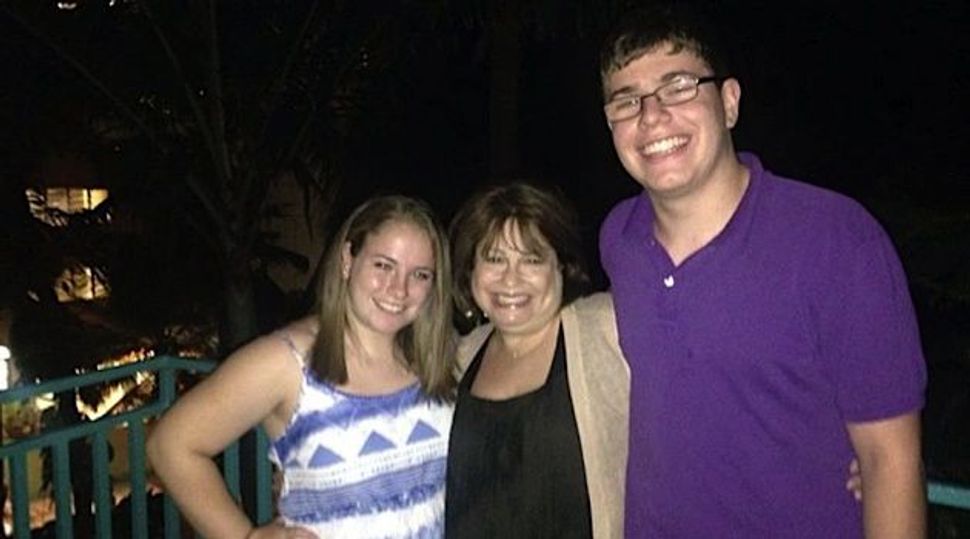 The author, center, with her children Anna and Adam, in 2014. // Photo courtesy of Judy Bolton-Fasman

For eight years I’ve written a weekly parenting column for a local Jewish newspaper in Boston. My valedictory column will be published just before Rosh Hashana. When I accepted the job, I made it clear that I would not be writing a “how to” column. Nor would I consult parenting books, which, to my mind, frequently state the obvious. No, I was going to live out loud — mistakes and all — and with their consent, so were my children.

My daughter Anna was 12 and my son Adam was 9 when I started the column. They were natural story generators. All I had to do was drive carpool and listen to the sagas going on in the backseat. I learned about who was being bullied, who loved whom, who didn’t love whom and most importantly, if my children were happy. Although I strongly felt the Yiddish proverb that you’re only as happy as your unhappiest child ring true to me, keeping my children happy through my own intervention was not my goal. Of course, I wanted to swoop in and fix whatever was bothering them, but most importantly I wanted to teach them coping skills.

The parenting columnist gig was not mine alone. From the outset, my children and I were partners in this writing venture. I agreed never to write about anything puberty-related and I was forbidden to talk about any details of their social lives. I also read them every single column in which they were mentioned. I soon discovered a huge benefit to reading my column out loud to my children: it kept me honest. No poetic license for this parenting columnist.

But I was also an anxious mother. There was the time I would not, could not allow Anna — who was in eighth grade at the time — to fly without me. I’m a nervous flyer and if that plane was going down, I was going to be with my kid. So I flew to Israel with the Solomon Schechter Day School of Boston. Anna, as well as my readers, never forgot it.

I was the polar opposite of my colleague Lenore Skenazy whose writing on parenting I was introduced to when she wrote a piece about letting her then 9 year-old son loose in New York City without a cell phone. I both cringed at and admired Skenazy. She also inspired me, and soon after, my kids were roaming around Boston on public transportation. By the time it came for Adam to do an international trip with his school, I had settled for obsessively tracking the flight. Given my neuroses, does this make me an exemplary parenting columnist? Maybe not, but it makes me a real one.

I think my children recognize that my pitfalls can be as hilarious as they are embarrassing. One column that generated a lot of comments was about an argument that I had with Anna when we were coming back from an evening SAT tutoring session. I hate the SATs with a passion and I suppose that contributed to my already bad mood. But she was no better as she reached over and fiddled with the heat in the car, breaking our family’s cardinal rule of driving: not to mess with the driver. The floodgates opened. She and I were drowning in recrimination. I finally parked by the side of the road and left her with the car keys. I walked away and several minutes later I realized she wasn’t coming to pick me up. Just as I started to turn back there was a police car and I flagged him down. The officer gave me a lift back to my car. I felt like a criminal in the cruiser’s caged backseat. Before he released me he shone a flashlight on a crying Anna to make sure she was actually 17 and not 7.

This was not recognizable Jewish mother behavior. Yet many Jewish mothers wrote to me that they could relate, although none admitted to leaving their child by the side of the road. Anna not only approved the column, she loved it.

Aside from abandoning my kid, I learned how sturdy and brave my children are. I wrote a piece about Anna and her wish to serve in the Israeli army after college. Adam gave me permission to write about his coming out. I can only hope that I captured his grace and dignity.

In fact, those are the watchwords that come most to mind when writing about my children all these years: grace and dignity. Anna is now 20, a junior in college who still flirts with the idea of joining the Israeli Defense Forces. Adam, in his last year of high school, is 17 and growing ever more comfortable in his own skin. My children and I agree that the three of us have aged out of that early phase of parenting that I chronicled so intensely and lovingly. Now it’s time for them to have more privacy. But they have always been supportive of the column, and more importantly, of my work in general. To paraphrase Eishet Chayil — a prayer extolling “A Woman of Valor” — many have done deeds valor, but you my children exceed them all.

Judy Bolton-Fasman is a frequent contributor to the Sisterhood Blog and writing a memoir about her father called ‘1735 Asylum Avenue.’

A Farewell to Parenting Columns