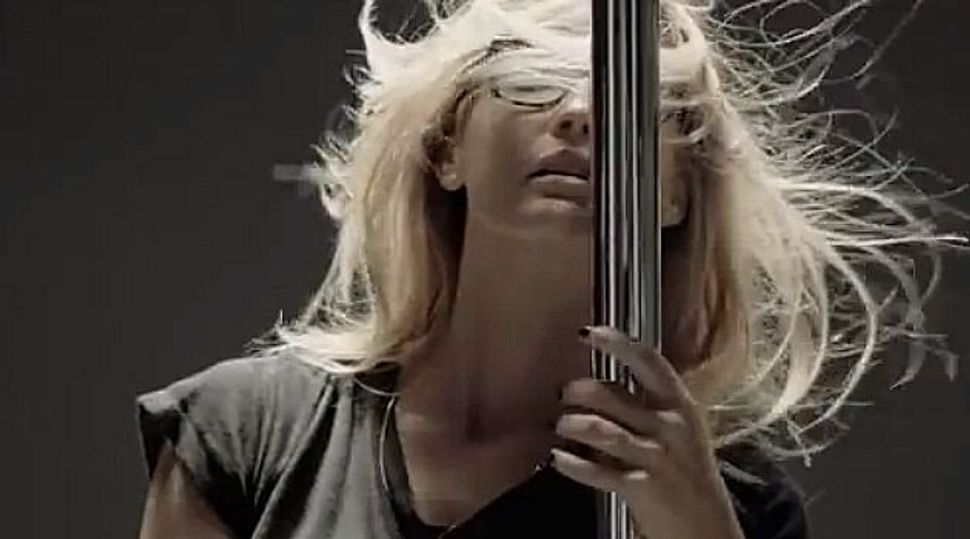 Bar Rafaeli in a commercial for Carolina Lemke / Copyright: Youtube

In a recent commercial for an Israeli fashion eyewear company Carolina Lemke, Bar Rafaeli is featured bespectacled and pole-dancing in a dream sequence inside of a subway car, across from a leather-clad man who is checking her out.

The Israeli model writhes her away up and down the pole in a midriff-baring tee, jeans and stiletto heels, and we are to find her desirable until the truth is revealed: The woman is actually chubby, something the guy only realizes when he puts on his Carolina Lemke’s glasses.

Lesson? Fat is the antithesis of hot, and confusing one for the other is so ridiculous that it’s worthy of a punchline.

That’s a terrible idea, but it is not the one stirring up most of the complaints in Israel. As Haaretz writes, the majority of viewer take issue with the way in which the ad objectifies Rafaeli, putting “her in a pornographic pose just to catch the viewer’s eye” as one viewer put it.

While pole-dancing is actually quite old — there are Indian dances that utilize poles that go back to the 12th century — the style we are familiar with was created in strip clubs in the late 20th century with the direct intention of titallating men. In the last decade or so there has been a movement to turn pole-dancing into more of a sport, and indeed there are highly athletic global competitions today.

So is this a bad thing? When Beyonce took the stage for her recent marathon VMA performance she attempted to show how a modern woman can be all things at once, a lady who likes seducing her man (by way of pole-dancing), and a feminist (by way of a sampled speech on feminism and a giant sign behind her). Perhaps it’s time to distance pole-dancing from its smutty, patriarchal, lap-dancing, dollar-tipping roots, and accept that it is just another form of sensual dancing? Things evolve. We no longer consider Mariachi music Polish, or noodles Chinese.

Except here’s the thing: pole-dancing hasn’t really evolved quite that much yet, and nothing makes that’s clearer than Rafeali’s ad. In it, a woman’s value lies clearly in how much she complies with external standards of beauty, and not about whether she feels sexy herself. There is no ownership, just shame, for the heavier woman who, we are to believe, was able to move sexily, but still doesn’t deserve to feel sexy at the end because of her weight. It is all too clear that the world the commercial inhabits is not one where women are in charge.