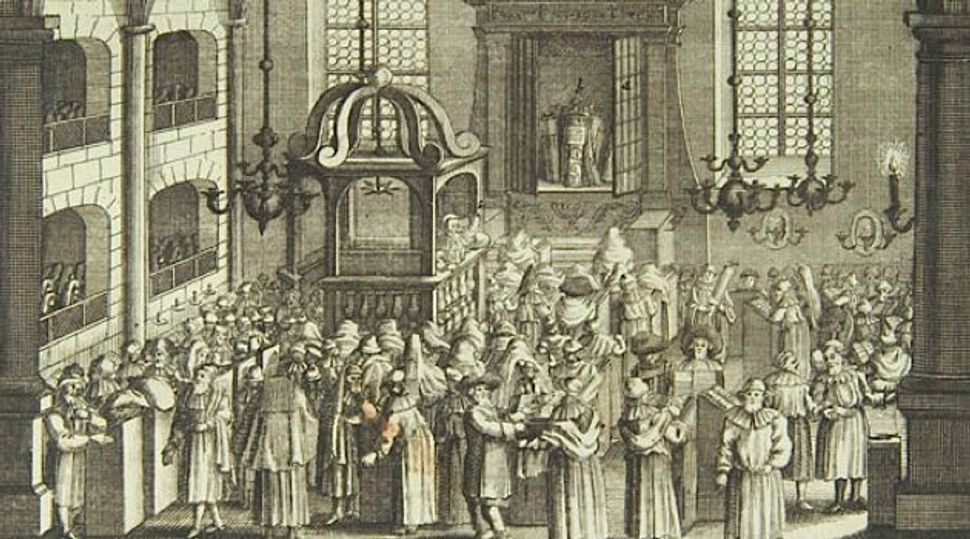 My father was buried on the eve of Rosh Hashanah 2002 and the holiday began just a few surreal hours after I stood at his open grave. The shiva — the seven-day period of formal mourning — was cancelled to usher in the New Year. With a truncated shiva behind me, I debuted as a congregational mourner on Rosh Hashanah. It was the first time that I said the Mourner’s Kaddish. Arguably, the busiest day of the year in the synagogue, I stood up in front of 800 people to recite the Kaddish — effectively a love song to God whom I felt didn’t deserve my adoration.

The feminist, poet and liturgist Marcia Falk had a similar experience. In 1978, her father Abraham Abbey Falk died midway between Rosh Hashanah and Yom Kippur and her grieving was cut short by the advent of the Day of Atonement. After three days of shiva, Falk braced herself to mourn in a crowded synagogue. But the public face she tried to show faded away when she was confronted with the somber, terrifying words of the Un’taneh Tokef. The thousand year-old prayer, written by an unknown author in Northern Europe, is central to the Yom Kippur liturgy.

In a recent presentation at Brandeis University sponsored by the Hadassah-Brandeis Institute, Falk noted that her ambivalent relationship with the Un’taneh Tokef was the inspiration for her latest book, The Days Between: Blessings, Poems, And Directions of the Heart for the Jewish High Holiday Season.. “The Un’taneh Tokef” she said, “is a listing, a repentance. The message it conveyed to me, five days after losing my father, was that if he had been a pious, righteous and repentant man the decree would have been averted and he would not be dead. No one actually believed that, but nonetheless the words were hurtful and unhelpful.”

Falk described the experience of hearing the traditional Un’taneh Tokef as one that left her feeling “hollow” and then angry.

I remember feeling similarly distressed that the Yom Kippur liturgy did not address my grief. For Falk, though, it led her to her life’s work as a composer of a new Hebrew liturgy — a liturgy expressed in a gender-free, non-hierarchical language. In prose and poetry and prayer, Falk jettisoned the image of God as father, king and ruler and brought a more inclusive voice to wide attention in her opus The Book of Blessings: A New Prayer Book for the Weekdays, the Sabbath and the New Moon..

“The Days Between”, however, focuses on the ten days between Rosh Hashanah and Yom Kippur traditionally known as the Yamim Noraim — the Days of Awe. Falk calls these days by a gentler name: the Aseret Y’mey T’shuvah, the Ten Days of Turning, or Returning. In keeping with that welcoming spirit, there is no image of God as a judge or executioner in these pages. God is a spirit, a force, a benevolent presence in the world. In her rendition of the Un’taneh Tokef, Falk reflects her belief that “our mortality is the core of a spiritual life.” Her interpretation of the prayer begins: “Our lives are stories/inscribed in time./At the turning of the year/we look back, look ahead, see/that we are always/in the days between.

I was most affected by Falk’s rendering of Yizkor, the service of remembrance. She transforms Yizkor from a communal, one-size-fits-all liturgy into something more personal and meaningful by renaming it Ezkor, “I recall.” The traditional liturgy asks God to remember the souls of our dead, but Falk recasts the service as a personal journey in which recollections of our dead are individuated. “’I Recall,’ writes Falk, “offers a way to mourn while acknowledging the fullness of one’s experience.”

There are parallels between traditional liturgy and Falk’s prayerful renditions. For example, in Falk’s Ezkor service, her poem “Beneath the Shekhinah’s Wings” corresponds with Psalm 23. The phrase tahat kan’fey hash’khinah (beneath the Shekhina’s wings) is from El Maley Rahamim, God of Compassion, the hymn customarily recited at funerals.

As I read through Falk’s prose poems and “re-visionings” of the High Holiday prayers, I realized that she has written a machzor, a High Holiday prayer book, for the 21st century that is nothing short of revolutionary. This machzor begins with the beautiful, simple idea of exalting the world around us rather than limiting ourselves to the traditional extolling of God’s name as we do in the Mourner’s Kaddish. In “The Days Between” Falk encourages us to confront our mortality while delving into the richness with which we commemorate our humanity.

A traditional translation of the Un’taneh Tokef