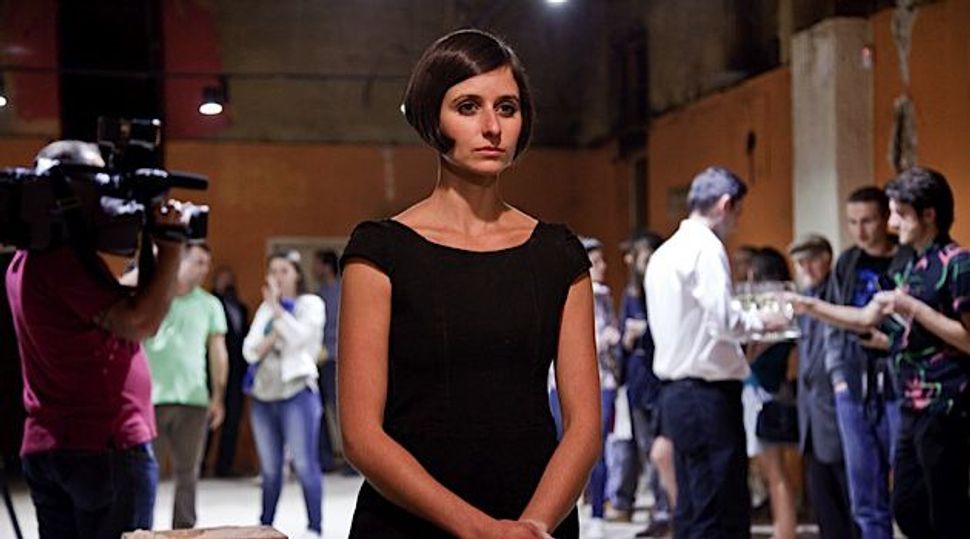 JTA — Since 2011, American conceptual artist Elana Katz has been performing in Europe at sites once identified with Jewish communities, through a project called Spaced Memory.

“The history of these places is unacknowledged, forgotten and in some cases even concealed,” the Berlin-based Katz, who has worked with pioneering conceptual artist Marina Abramovic, explains in a crowdfunding appeal for Spaced Memory.

She has performed in Romania and in Serbia, and this month launched a performance in Pristina, the capital of Kosovo.

But Kosovo has posed some unique challenges. Mainly, the fact that documentation about Jewish properties in Kosovo was lost after the 1999 war, and current and former Kosovar Jews disagree on what was and was not Jewish. So Katz was faced with a dilemma: How to commemorate a Jewish site that might not actually have been Jewish?

She decided to focus on the Pristina Boxing Club, the one building that all her Jewish interlocutors agreed had once had Jewish use — just what kind of use, no one really knew.

Her performance, titled MAP — Action Boxing Club, opened this month, in partnership with Stacion — Center for Contemporary Art Prishtina, and funded in part by the the United States Embassy in Pristina. The opening evening drew a substantial showing from Pristina’s artistic and political community, including Kosovo’s president, Atifete Jahjaga.

In the performance, the building’s floor is carpeted with talc, and Katz greets arrivals with an outstretched hand covered in the powder. The scattering of the talc over her evening dress, over the visitors and throughout the room creates an ephemeral map, which she suggests signals the interaction between memory and history.

“A visual map of touch is created in reference to the mapping of histories, at a location with a forgotten Jewish past,” she explains on her Facebook page. In this interview with Kosovo TV, starting at about 11:30 in the video, she eloquently explains the difficulties of exploring Kosovo’s intangible Jewish past.

“It’s like detective work, I’m looking for places that no longer exist,” she says.

“In Kosovo, there’s a very specific circumstance, because the archive is missing, the archive of the Jewish community is currently missing,” she says. “It was taken to Serbia after 1999, and at the moment it cannot be located. The research that I’ve done here has been very much, actually exclusively based on the collection of oral history.”

Further on, she elaborates: “I’m responding to the research process, the history of the specific location and then what’s found at the current location.”