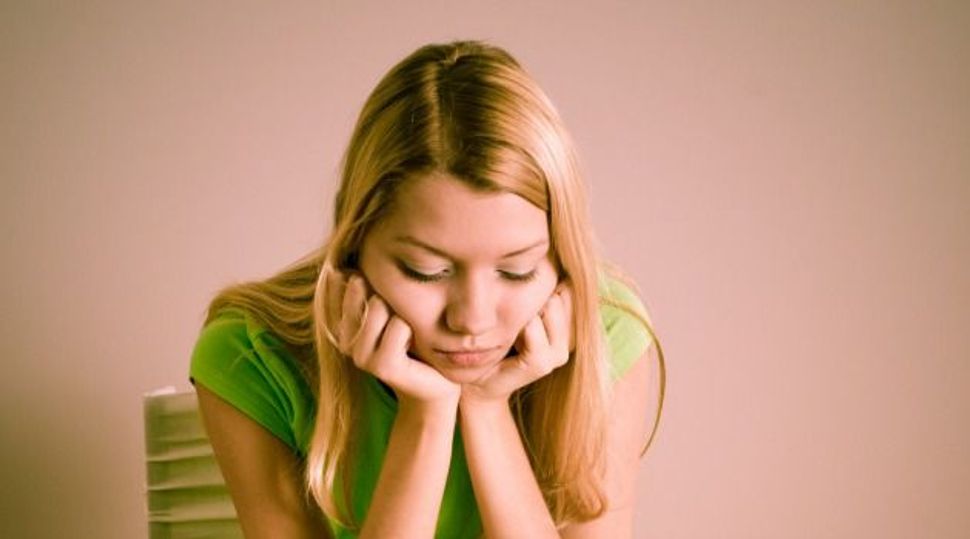 From the moment I woke up on the morning of my first Yom Kippur in September of 2010, a heavy ache sat right at my forehead, some combination of early hunger pangs, a minor hangover, and caffeine withdrawal. When I later sat next to my boyfriend and his family at their New Brunswick, New Jersey synagogue, I thought of nothing but the fact that my eyeballs were sore. Occasionally I would sneak into the bathroom, sit down on the toilet and rest my head on top of the cold metal sanitary napkin dispenser. So this is atonement.

During a brief respite between morning and afternoon services, I accompanied the family outside. We stood on the steps to Anshe Emeth Memorial Temple in New Jersey beneath the direct glare of a sun I found annoyingly bright. I grimaced and said something uncreative about my headache.

“We can go get you coffee right now,” my boyfriend said.

My boyfriend wasn’t trying to tempt me, but rather giving an option he felt I had: because I wasn’t (and still am not) Jewish, I wasn’t required to fast. It hadn’t ever occurred to me, though that I wouldn’t partake. Though I hadn’t yet begun my conversion process, a part of me already considered the possibility Judaism was my faith, so I wanted to experience everything that an authentic member of the Tribe did. If I felt truly horrified at hearing my sins during the reciting of Al Chet, if the shofar did awaken some spark in me that wanted to be better, then perhaps I was, at last, home.

I also didn’t want to be the only one to break down and eat. From the age of 13 to around 25, I struggled off and on with anorexia. During this time, I attended numerous types of therapy and endured four hospitalizations. There were periods of respite during these 12 years, but in bouts of illness, eating was the most shameful act I could imagine. I did it sparingly and exclusively in private.

In my mid-twenties, with the assistance of a wonderful therapist, among other things, I began to abandon my destructive belief system, and eventually progressed to the point where I had no abnormal food neuroses (I’d put this at about five years ago.) Though I am a recovered anorexic, it still would have been profoundly embarrassing to admit defeat after mere hours of abstaining. When I was actively ill, this humiliation at admitting to an appetite was far more pronounced. I couldn’t ever say the words, “I am hungry” aloud, or eat a snack in front of another person even if I had a certain number of calories left in my daily budget. Now, I often eat when no one else is, and I’m not afraid to order what I want at a restaurant.

When my Jewish boyfriend invited me to Yom Kippur but said that I didn’t have to fast, my first reaction was I cannot be the only one not fasting. I had secretly hoped, in fact, that while the others were wheezing and begging for pizza, I would be blissfully coasting through, reminded of the times when days, even weeks passed much this same way. A walk in the park for an old hat like me. But here I was, leaning against a metal handrail and looking bitterly in no particular direction, in what seemed like worse shape than any of the others on the steps.

In the ensuing years, I’ve tried to determine why my old fervor for starvation has never kicked in at this very convenient moment. Instead, each year I approach Yom Kippur as if approaching the gallows. One theory is that I am completely recovered, and therefore abstaining from food and drink doesn’t provoke in me a manic excitability but rather the same dismal irritability it would in someone with a “normal” constitution. Another explanation, which is not mutually exclusive, might be that the process of fasting in Judaism serves an entirely different purpose than it does in the ersatz religion of anorexia.

Since anorexia became a well-known psychiatric illness in the eighties, much has been said about the poor self-image of the sufferers: the belief that they are worthless, fat, and less-than human. Self-inflicted starvation is very often seen as something that arises from that lack of self-worth; why, after all, would someone deny themselves essentials if they felt inherently deserving? But a less often mentioned belief, which is perhaps just as integral to the pathology, is that starvation renders the anorexic superior to mere mortals. For all the times I felt weak and pathetic next to my peers, there were equal number of moments when I’d watch them scarf down burgers and think, How stupid they are, to indulge in something they don’t need. I felt like my starvation allowed me to permanently transcend the human world, that is, of course, until I came crashing down.

In contrast, fasting on Yom Kippur is meant to remind the “afflicted,” to use the Biblical word for faster, exactly how much the individual relies upon the laws of nature, and ought to follow them to sustain precious life. On this day, we are acutely aware of exactly how human we are, and how much we remain at the mercy of God and the laws of His world. And while the fasting is meant to elevate us to a special level of “kedusha,” or holiness, nowhere in Jewish philosophy does it say that such a level of holiness is always attainable, or even desirable.

In an icky parallel to anorexic logic, fasting is a means of atoning for all the wrongs you might have committed throughout the year. But to imagine that your sins are so plentiful and unique that you need to be atoning every day is a kind of twisted narcissistic assumption in and of itself.

When that first Yom Kippur was over, I felt mostly relief. My headache remained even after I greedily consumed the awaiting hot coffee, so I had to spend twenty minutes lying in a quiet, dark room while the rest of the family dug into a break-fast platter of bagels and lox. When I finally felt stable enough to stand, I ate my bagel with such messy relish that my former self would certainly have recoiled in horror, but at the moment, I cared not one whit.

What my first experience fasting had taught me was that atonement through self-denial, while important, was one infinitesimal fraction of the Jewish experience. We fast, after all, just a handful of days in the year. The rest of the time, we should own, and respect, our human needs.