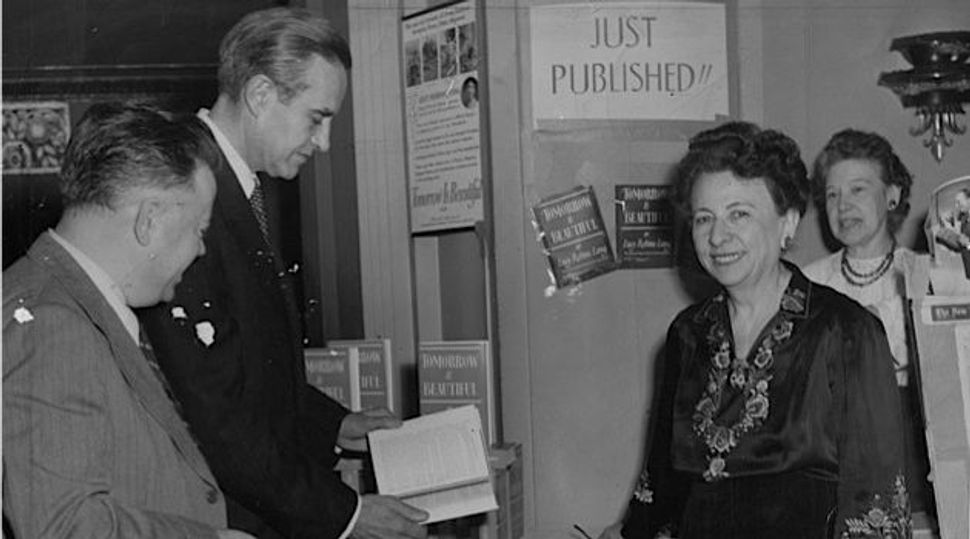 When Lucy Fox Robins Lang’s memoir “Tomorrow is Beautiful” was published by Macmillan in 1948, the Forverts was there to cover the book party.

Celebrating along with Lang, on the far left of the image with his back to the camera was no less than David Dubinsky, President of the International Ladies’ Garment Workers Union.

As a young girl Lang immigrated to America with her family, where she evolved into a much beloved progressive activist who reportedly journeyed within movements as varied as anarchism, the Wobbly group (Industrial Workers of the World), socialism and pacifism. Her belief in women’s equality carried into her intimate life where she was a practitioner of “free-love” and domestic partnerships decades before that was common. In her later years, Lang was also part of a dynamic progressive power couple when she married third husband Harry Lang, Forverts lead writer on labor and eventual pioneering Labor Editor for the Forverts’ West Coast bureau. But before going West together, they reportedly travelled way back East to his town of origin in Lithuania, as early as 1928.

In September 1939, a decade before her memoir was published, she authored a different sort of document. Leafing through her file in our archive it’s impossible to remain uninspired by her proposal for the establishment of a hospital, clinics and research laboratories “dedicated to the welfare of workers and the general public” a vision she expressed just as the old country was imploding with the Nazi invasion of Poland.

Living at the Hotel Beacon on Broadway and 75th Street at the time, her ideas included hospital ownership by the patients for whom she wrote “the Labor movement has so far failed to take adequate steps to secure for the worker a sufficient service to prevent disease.” In a handwritten note on hotel stationary she wrote Forverts General Manager Alexander Kahn that the idea for such a facility had the support of notable individuals such as Herbert Hoover and Albert Einstein, Rabbi David de Sola Pool of the Spanish and Portuguese Synagogue, acclaimed labor activist Rose Schneiderman who was Secretary of New York State’s Labor Department at the time and the financial leadership of the Warburg family.

The image by Forverts photographer Alexander Archer seems to have captured an energy radiating from within Lang, that offers an alternative to the more typical saccharine peppy smiles in so many publicity stills. She seems here to affirm her credo that in fact tomorrow is beautiful already.