Did Rabbi Freundel Build Mikveh for Own Fantasy? 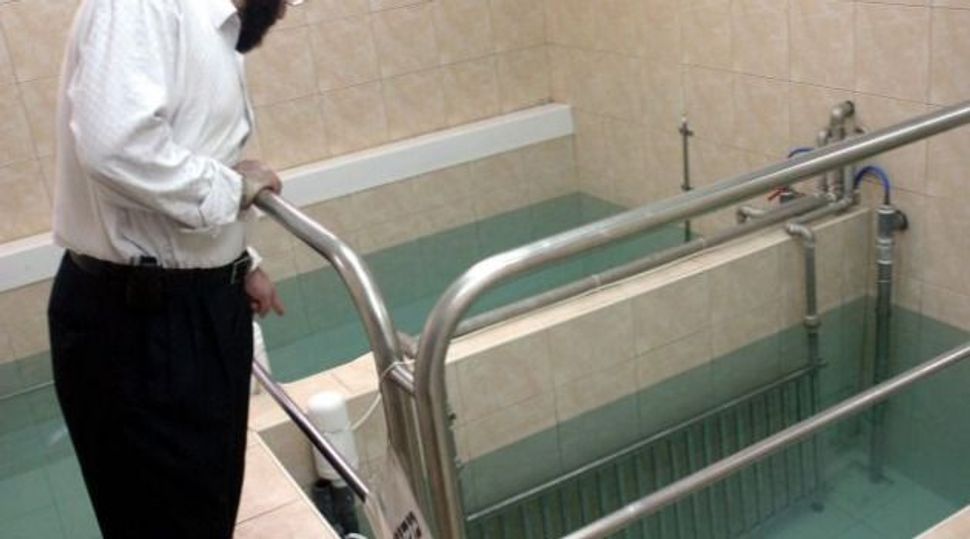 (Haaretz) — When I first heard about Rabbi Barry Freundel’s arrest on grounds of voyeurism, I was upset, but not horrified. If the allegations are true, I thought, we have a case of a sick man who couldn’t control his sexual urges. Sad. Especially since he carries a title that would make us expect he should know better.

But then I heard how he allegedly carried out his crime: Placing hidden video cameras in the mikveh, the ritual bath, to watch his female conversion candidates practicing their nude immersions. Horrifying! I cried when I heard this. The ultimate abuse of male rabbinic power, yet an unsurprising symptom of a patriarchal system that sexualizes and objectifies women in so many ways. A prime example is the exclusively “women’s mikveh”, where all know that women are going to immerse in the nude to purify themselves for sex, but where men make the rules.

Twenty-three years ago, I was a creative writing student living in Washington, D.C. and took a part-time job running one of the (if not the) first mikveh located in a Conservative synagogue, Adas Israel. It was the only mikveh in Washington, D.C. Yet Freundel told his congregants not to come to our mikveh, but rather to travel to Silver Spring, Maryland, to a mikveh that was located in an Orthodox synagogue there. This too was upsetting but not horrifying. An expression of Orthodox Jewish distrust of and disrespect for anyone not Orthodox, especially liberal Jewish rabbis and institutions.

But Freundel always wanted his own mikveh, which is probably one reason he did not want to acknowledge that there was a perfectly kosher mikveh already existing in Washington, D.C. A few years ago I heard that his dream had come true; there was now an Orthodox mikveh in D.C., and he was its rabbi.

We know that sexual predators are not created overnight but rather develop patterns over time. If the accusations about Freundel are true, I wonder if even back then he was plotting this extreme abuse of his rabbinic power and fantasizing about the women’s bodies he would have access to once he had his very own women’s mikveh.

That is where the problem lies. Yes, there are sick people in the world. That is not the problem. The problem is when these people are given the power to exercise their abusive behavior in the name of religion. The problem is when a male-created and male-run system builds an exclusively female sexualized space and not only gives a male rabbi the power to make its rules and define the status of its female practitioners, but also hands him the keys to that exclusively female space.

Similar even if less extreme scenarios are played out every day in so many Orthodox rabbinic institutions. A male rabbi insists on a mechitzah partition in the synagogue and then walks over to the women’s side to tell the women to stop talking; a male teacher in an all-girls’ school tells his students to wear longer sleeves because their elbows excite him sexually; a man at the Kotel plaza of the Western Wall throws a chair over the mechitza at a group of singing women because he can hear them on the men’s side of the plaza. A male judge in religious court tells a woman to return home to her abusive husband, claiming the male-created classic halakhic system will not allow him to force the husband to grant his wife a divorce.

One solution on the mikveh front that has become a growing phenomenon in the Jewish world is the community mikveh, which is not monopolized or controlled by male Orthodox rabbis, and is not for women alone. These are non-gendered, non-denominational ritual baths open to everyone by appointment only, with guides trained to respect personal space and dignity. I run one such mikveh on Kibbutz Hannaton in Israel’s Galilee region.

Shmaya: A Ritual and Educational Mikveh is open to all who want to immerse and for whatever purpose they choose: male or female, straight or LGBT, Orthodox or Liberal, Jewish or other-than-Jewish, married or single. I am the only woman rabbinic director of a mikveh in Israel; but that is not the point. An egalitarian-feminist male rabbi would also be appropriate—or someone who is not a rabbi at all!—because Shmaya is not a “women’s mikveh”, and the only person making the rules is the person going into the water.

When I was running the D.C. mikveh Freundel did not consider kosher enough over two decades ago, that was just the beginning of this ‘new mikveh’ movement. It is interesting how things come full circle—the problem of male power, open to abuse, and the solution – of a space released from the gendered power plays of Jewish religious life – coming from the same place.

Did Rabbi Freundel Build Mikveh for Own Fantasy?