A First in the Jewish World 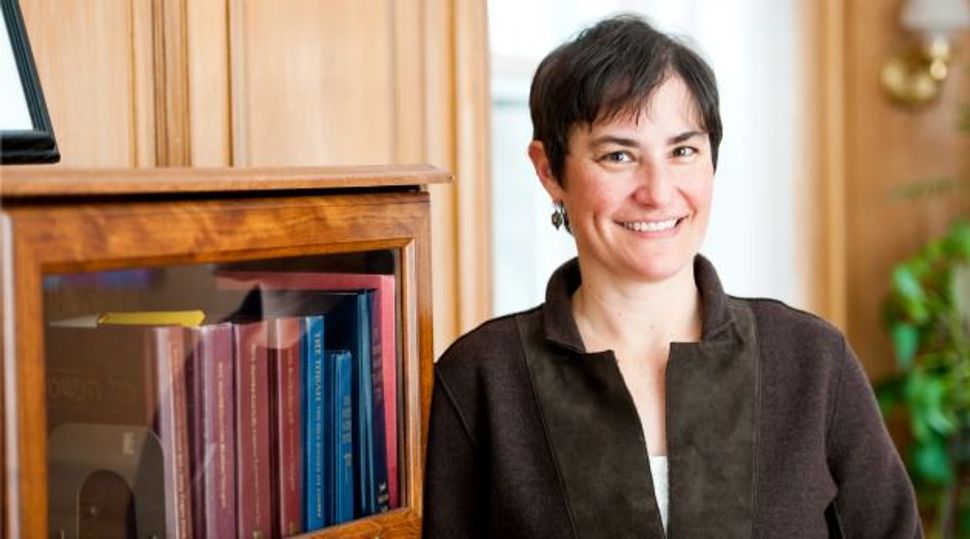 Rabbi Deborah Waxman has been many firsts in her life. She was one of the first bat mitzvahs to be celebrated on a Saturday morning in her hometown of West Hartford, Connecticut in 1979 and now she is the first female rabbi, and the first lesbian, to lead a Jewish congregational institution.

Waxman, 47, took office as president of the Reconstructionist Rabbinical College (RRC) and Jewish Reconstructionist Communities on January 1, 2014. Since then, Waxman has made it her business to bring a Reconstructionist perspective to a broader public conversation. She has been invited to speak at a number of settings from the JCPA Plenum to the WAMC public radio station in the Berkshires that broadcasts to 6 states.

Growing up in a Conservative Jewish family, Waxman is a middle child of a family of five. Her father was a traveling salesman and her mother was involved in their synagogue. Waxman earned a Ph.D. in American Jewish History from Temple University after her M.A. in Hebrew Letters from the Reconstructionist Rabbinical College. Before that she’d earned a B.A. in religion from Columbia University.

Waxman now lives in Philadelphia with her partner, Christina Ager.

Dorri Olds: When did your orange on the Seder plate tradition begin?

Rabbi Deborah Waxman: We’ve been doing that in my home for the past 30 years. I see the orange as both a symbol of celebration and of challenge. In the Reconstructionist movement we can celebrate [this change]. In the wider Jewish world it’s still a challenge. One of the things about bringing a Reconstructionist analysis more fully across the wider Jewish community would be a shattering of what seems to be a glass ceiling. Instead, it should be what I see at the Jewish Social Justice Roundtable.

One of the organizations that the RRC and the Jewish Reconstructionist Communities participate in is the Jewish Social Justice Roundtable. It’s a group of 22 organizations working together. The round table is a very diverse set of leaders, and I see a lot of women there — as opposed to what I see in the wider Jewish world, which is a lot of men.

Can you describe your first year so far as the RRC leader?

It’s been extraordinary. It felt incredibly important to me to be out in Reconstructionist communities, getting to know them and hearing what they had to say. I have been able to visit 14 Reconstructionist congregations across the states, and I met with leaders of another 20. It’s been an ongoing series of rich and rewarding conversations with people who understand that they hold the responsibility for the Jewish community and the Jewish future they want to live in.

Can you define the philosophy and mission of the Reconstructionist movement in an elevator pitch?

[Laughs] Yes! We have our students practice that. We have them learn a two-minute talk on Reconstructionism. Here’s mine: Reconstructionism is based on an understanding of Judaism as the evolving religious civilization of the Jewish people.

How can we respond to change in a proactive way?

I believe that the institutions that the American Jewish community established for ourselves after World War II aren’t working particularly well in the 21st century and that we have to foster and shore up those that are working well. We have to be open to and activist about cultivating new models for engagement with Jewish life and Jewish community.

What is your vision for the future of the Reconstructionist movement?

Reconstructionism has a tremendous amount to offer at this moment in time. There’s a lot of volatility in the Jewish community and in the broader American community, and there’s a lot about a Reconstructionist approach to Jewish life that can be meaningful and inspirational at a time of intense anxiety.

Please elaborate on your comment that American Judaism is going through major upheavals and that “this is a volatile and unprecedented landscape.”

It’s been a hard summer. There have been a lot of concerns about anti-Semitism. It’s so important to remember that overwhelmingly the evidence suggests that American Jews have been deeply embraced by the American mainstream. One of the clearest markers of that is the intermarriage rate.

There are no longer any social barriers that would prevent Jews and non-Jews from socializing and therefore marrying. There are so many positives about that kind of embrace, including the kind of Jewish representation in the Senate or the kind of contributions that Jews have been able to make in science and entertainment. But there are also challenges that emerge out of that. One is that Jews are allowed to live anywhere, and they do, so there is a loss of intensity that comes with a loss of density.

My family grew up in a really Jewish part of Hartford, Connecticut. You didn’t have to do anything to be Jewish. But now, for many of us outside of urban centers like New York and L.A., we have to actively choose to be Jewish, to make a conscious choice to perform our Jewishness. It’s not just something that happens because it’s in the air.

A First in the Jewish World