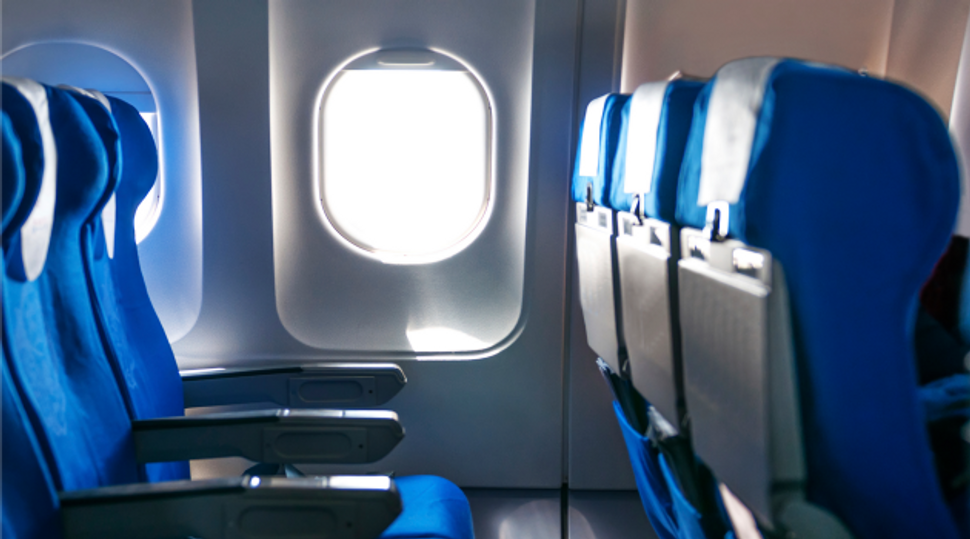 I know I run the risk of relinquishing some modicum of feminist street cred and incurring the wrath of all those up in arms over the situation, but here goes: I am not offended when the Hasidic gentleman next to me asks to switch his seat so he might not fly an entire flight to or from Israel next to a woman. I might think he’s an extremist, and I might think he’s not practicing a very halachic form of Judaism, but as for taking personal offense, so long as my uncomfortable Hasidic or Haredi male neighbor asks politely if he can switch his seat, and so long as he doesn’t hold up a flight should it be impossible to find an empty seat or willing passenger ready to switch, then I have bigger things by which to be offended than his preference not to sit next to me.

I write this in response to the media frenzy surrounding Sisterhood contributor Elana Sztokman’s recent account of an ultra-Orthodox male passenger delaying her flight for over half an hour while he insisted that another seat, one not next to a woman, be made available for him. Obviously, this was extremely rude, inconsiderate and the absolute wrong thing to do. But it seems that the ire this account has generated—a petition demanding El Al change its policy on accommodating those who desire a gender-segregated seat, incensed comments about the accumulated societal ills of the ultra-Orthodox and a video mocking this phenomenon, complete with offering Hasidic men a condom-like body vest to protect themselves from female neighbors—is directed more at the general practice of asking to switch seats and less so at the extremes to which this particular male passenger took it. Sztokman herself says: “What offends me is the premise that sitting next to me is a problem.” The premise—not the problematic way this man expected his proclivity to be accommodated.

But it’s not news that Haredi culture both views and treats women differently than modern Jewish culture does. As any more progressive people viewing a more fundamentalist community, what we see from the outside as the relegation of women to the background is viewed much differently by those on the inside. We may jeer at their explanations about the inherent holiness within women that warrants such gender separation, call it misogyny and vow never to let ourselves and our daughters fall prey to it, but it’s another Jew’s right to practice his religion the way he sees fit—barring real physical or mental abuse toward others—despite how distasteful we may find it.

It’s difficult for me to watch the vitriol being spewed toward this segment of Jewry and wondering how much different it is from the hatefulness that many ultra-Orthodox people direct toward Women of the Wall or women who don’t abide by traditional laws of modesty. If we want the right to pray and practice and dress in the ways we see fit, why do we cast such caustic aspersions on the premise of a man who calmly asks to change his seat in order for him not to stray from his preferred religious outlook. To cause a delay or throw a hissy fit if the request can’t be granted is harassment. To merely ask the question, I posit, is not.

I have a hard time believing that the scene described by Sztokman occurs the majority of times a Haredi male passenger asks to switch seats, both from anecdotal experience and, more generally, from common sense: if such a half-hour holdup display like the one caused by Sztokman’s neighbor occurred much more frequently, I have to think the problem would have been addressed by the proper authoritative channels. There are only so many delayed flights an airline can cause while catering to the Haredi economic bloc before the TSA steps in to demand tangible reform. I believe that most of the time an ultra-Orthodox gentleman asks to switch his seat with little fanfare. I’d like to believe the man always makes his request in a truly mentschlich way, though admittedly that’s probably naive. I think it’s probably difficult for men who are so thoroughly unaccustomed to interacting with non-Hasidic people, especially, say, a female flight attendant, to know the mannerly way to ask for a favor.

But that’s what it is, isn’t it? A favor for a fellow Jew, no matter how archaic we may deem his beliefs. We are indulging a request that we may neither understand nor agree with, but if it doesn’t really put us out, if the flight isn’t full and there is in fact someone who will easily volunteer to switch seats, then what is everyone’s colossal problem with the mere premise? I’m not saying you shouldn’t feel put out by such a request—there’s no one-size-fits-all emotional reaction for all women—but I wonder: am I the only woman in the modern Jewish world who’s not personally offended by men who don’t want to sit next to me on El Al flights?

I am dismayed that Sztokman’s anecdote seems to have served as a convenient excuse for too many to unleash truly repellant opinions about ultra-Orthodox Jews, and I wonder at the double standard in question. Women want a space to pray at the Kotel and to offer halachic guidance to women on niddah—a space, really, to find a distinct voice in the landscape of Jewish observance—and we would ideally like the people who strongly disagree with us to not cruelly belittle the way we choose to exercise our Judaism and to, if not strive to accommodate us, then to not actively work against our goals. So why are so many so quick to decry the mere premise—not the dictatorial bluster and flight delays that so occasionally accompany it—of a man seeking to fulfill his own religious convictions and asking to sit anywhere else but next to a woman who isn’t his wife?