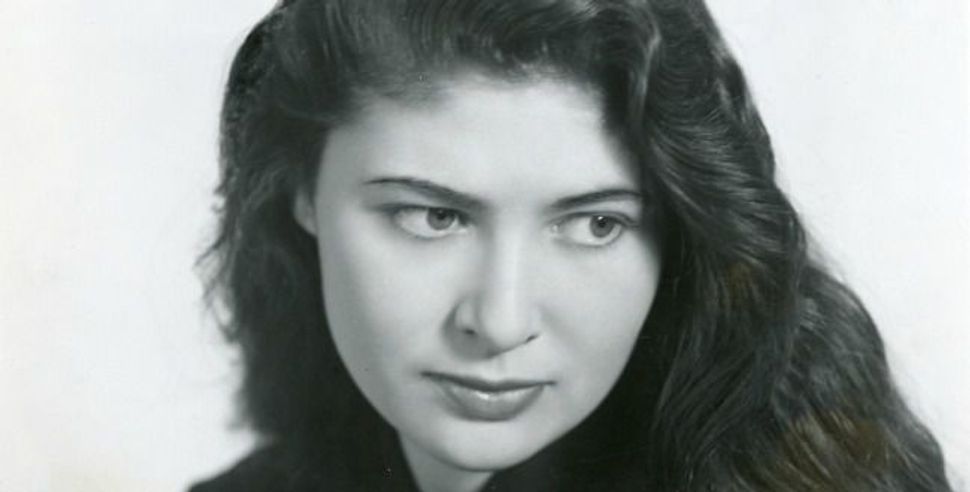 Like a meteor blazing momentarily across the sky, Didi Ramati’s acting career—despite a pioneering role in early Israeli filmmaking—shined brightly but “faded out” just as fast.

In 1952 the Forverts published her image as a way of introducing a nay un sheyn yidish punim, a new and darling Jewish face of the silver screen. Starring in a cutting edge Israeli film premiering in New York City at Park Avenue Theatre, then located at 59th Street, Didi Ramati played ‘Tamar’ in the film ‘Faithful City.’ The paper enthusiastically described the film as the first English language and first feature-length film to emerge from Israel’s fledgling cinema industry. Influenced perhaps by the 1948 Yiddish film ‘Undzere Kinder’ [Our Children], the plot similarly centered around two teachers devoted to their young war-orphaned charges. It was Ramati’s first film appearance.

In the film the children, having survived the Holocaust in Eastern Europe, learn to adapt to their new homeland. Once in Israel, they face yet another war—the 1948 War of Independence. Directed by Josef Leytes, himself a Polish-born former prisoner of war, the film was distributed in the United States by RKO pictures, recently acquired by Howard Hughes, and was being screened as a fundraiser for Israel Bonds.

Ramati, born Didi Zonenfeld, is described as of Anglo-Dutch origins and legendarily got that first on-screen role while visiting relatives in Tel Aviv. Aside from her marriage to Polish Jewish novelist, and director Alexander Ramati, with whom she had a daughter, not much else is known about her. Following the trail of her films though, one tracks the development of the character role of the dark toned, wistful eyed, passionate yet undefined ethnic woman.

An award-winning actor at one point in her career, for decades Didi Ramati played a variety of diverse native character bit parts. She appeared as a local tour guide ‘Sabiya’ in the 1957 film ‘Istanbul’ starring Errol Flynn, and the Roma character ‘Rosa’ in an episode of the 1955 American television series ‘Soldiers of Fortune.’ In her husband’s 1966 Israeli feature film, ‘The Sands of Beersheba,’ she played the role of a native Arab woman, ‘Naima.’ Throughout the late 1950’s and 1960’s she played a ‘Tanya,’ an ‘Angela’ and even a ‘Theresa.’ She appeared as a generic ‘war correspondent’ in a 1959 television episode of ‘Adventure Showcase’ featuring iconic American character actor Harry Dean Stanton.

In the late 1980’s, still performing in her husband’s work, she appeared in his noted film about the Roma experience in the Holocaust entitled ‘And the Violins Stopped Playing.’ Once again her character was a Roma woman named ‘Wala,’ but this time it was a leading role as the wife of the film’s star, the late German actor Horst Buchholz (sometimes called the German James Dean) who played a Roma leader.

As one absorbs Didi Ramati’s glorious face and flowing biblical locks intensely posed from the far side of that photo frame, one feels the urge to murmur back into the image asking after her, know more about her, seeking to gather up the lost bits of her particular comet.