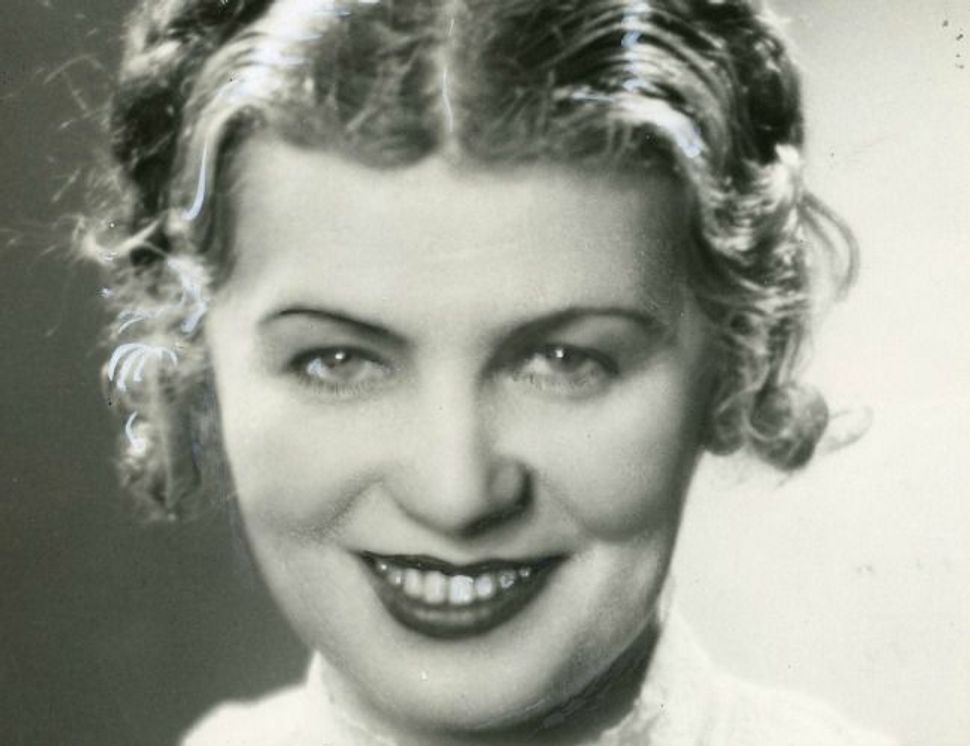 Shoshana Rose was so beloved a performer and writer, that when she died in November of 1968, Editor Moishe Crystol dedicated space in his weekly editorial column to underscore the magnitude of the loss, writing,“The Forverts and its readers have been orphaned.”

From her very first published Yiddish piece in 1912 in the “Lodzer Tog-Blat” [The Lodz Daily], Shoshana Rose published under a collection of pseudonyms including, Mary Rose, Esther Brovorska, Shoshana Kahan, Manye Friling, Ruzhe Kahan and Ruzhe Yakubovitsh. After marrying writer and editor Lazar Kahan, her legal name became Esther-Ruda Kahan, but in a heartfelt front-page obituary the Forverts chose to refer to her as “Shoshana.”

She was Shoshana to us,” the obituary began, “that’s how she was known here to colleagues, to her co-workers in artistic and journalistic circles, her wide circle of friends, and to her legions of fans. She was a loyal friend.”

Born in Lodz, Poland, Shoshana’s father died when she was a child, forcing her to leave school in order to support her family, which she did by sewing. Completing her education independently at a free school located at the marketplace, Shoshana found herself drawn to Yiddish theatre and began performing. Marrying and relocating to Warsaw she began her prolific artistic path in both the theatre and Yiddish literature, publishing and performing alongside her husband through the 1920’s and 1930’s. She also translated European dramas that were then performed in Yiddish theatre and was a published novelist as well as founding writer of the ‘women’s section’ in Warsaw’s “Hayntike Nayes” [Today’s News] and “Undzer Ekspres” [Our Express] among others. In 1947 she became a full time Forverts writer, debuting as R. Shoshana with her novel, “Ven Dos Harts Iz Yung” [When The Heart is Young] announced on the front page. It was described as a historical novel about Jewish life in Poland, France and America.

The war years found Shoshana, her husband and two young boys in Vilna. Her sons were arrested by the Soviets at a border crossing and exiled to a a labor camp in Siberia, where they were never heard from again. Shoshana and Lazar managed to escape— along with other Yiddish theatre activists and intellegentsia— to Shanghai, China where they were ordered into a ghetto. Undaunted by the brutal conditions, Shoshana kept a journal, which was later published in an oft cited account of their time there. The couple continued to perform until they were stricken with by the raging typhus epidemic. Lazar’s died from the disease and Shoshana barely survived weeks of illness. At the war’s end she emigrated to New York and continued performing, running the Forverts’ daily feature “Di Froy un di Heym” [Woman and Her Home] and publishing 14 novels. Her last homemaker’s column before her death featured what is likely the Forverts’ first ever recipe for shish kabob.

Avant garde Jewish writer Gertrude Stein famously wrote “Civilization begins with a rose. A rose is a rose is a rose is a rose.” Having emerged from staggering depths of suffering and loss, the Forverts’ Rose Shoshana seems to have embraced a dignified and serene acceptance, all while creating a prolific body of Yiddish writing. In his column memorializing her, Crystol recalled the sheer pleasure Shoshana brought the Forverts office daily with her signature greeting: Gut morgn yidishe yidn! Good morning Yiddishy Jews!