Reinserting Women into the Holocaust Narrative 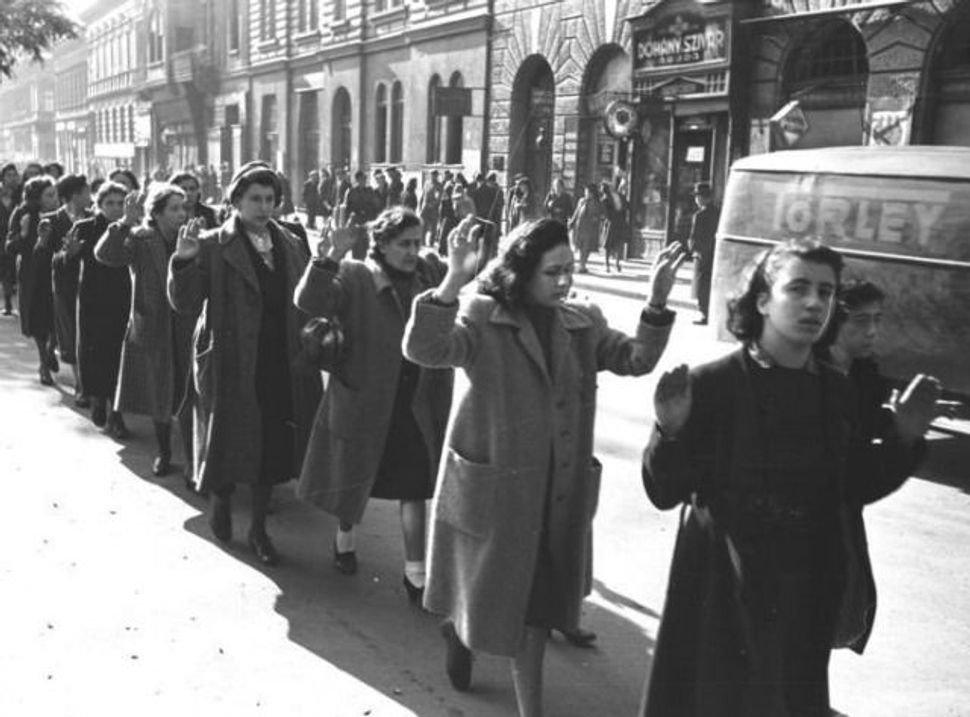 (Haaretz) – On October 7, 1944, Jewish prisoners in Auschwitz blew up a crematorium in an attempted revolt that, while ultimately futile, has become a powerful rebuttal to the claim that Jews succumbed to the Nazis without a fight. Many know this story but few know the names Roza Robota, Estera Wajcblum, Regina Szafirsztajn and Ala Gertner, four women who smuggled gunpowder under their fingernails and stitched it into the seams of their clothes to make the uprising possible.

Their role has been diminished in historical accounts of the event, if mentioned at all, but a new exhibition by the American Jewish Historical Society in Manhattan, called “October 7, 1944,” seeks to reinsert them into the narrative. The exhibition, which opened last month on the 70th anniversary of the revolt and runs through December 30, makes its case in a most unorthodox way: It merges contemporary dance and archival material.

“Holocaust and dance are not common bedfellows,” choreographer Jonah Bokaer told Haaretz. Bokaer, an internationally renowned artist, was commissioned by the historical society to make a 30-minute dance film inspired by the story that is projected on a wall of the exhibition.

The film features four women moving through a stark, factory-like space. Unlike most exhibition films, which consist of archival footage in grainy black and white or static interviews, the modern look of Bokaer’s piece creates a bridge to today and brings a sense of urgency to the room.

An earlier dance film by Bokaer, also featuring four women, caught the eye of Rachel Lithgow, the director of the historical society and curator of the exhibit. It reminded her of the Auschwitz revolt (and is also included in this exhibition). She asked Bokaer if he would be interested in collaborating, but he was reluctant at first.

“Historical material and performance can be a dangerous combo,” he said. “I generally don’t touch it in my work.” Yet he found himself drawn to the story and began to do research of his own.

That research took him to Auschwitz, where he spent a week pouring over archival material about the revolt, with the help of the site’s staff, and visiting the muddy crater where Crematorium 4 used to stand. He poured over record books, registration entries, name listings and key testimonies to verify information from the AJHS archive and dig deeper into the lives of these women, all of whom were executed in early January 1945, two weeks before Auschwitz’s liberation.

‘A little bit out of the box’

Lithgow understood that the inclusion of abstract dance films in the exhibition could confuse or alienate visitors who were used to seeing the Holocaust treated in a more straightforward way. But after working at Holocaust museums and archives across the country for more than a decade, she realized that a new approach was needed to keep the stories relevant.

“You have to change with the times, to make the material accessible,” Lithgow said. She admits that the current exhibition is “a little bit out of the box,” but reports that in the month and a half since its opening, it has drawn a record number of visitors, including younger people – like the elusive Brooklyn hipster.

On a long table against the gallery’s back wall, eight glass cases house artifacts such as written accounts of life in Auschwitz, military correspondence about the camp and a logbook with the name of Regina Szafirsztajn’s father. Above each case is a slice of musical notation for the Bach Chaconne for solo violin, which plays in the background, and below each is a piece of a deconstructed violin. Together with the films, the exhibition is both informative and emotionally evocative.

“I want to start with kind of a meta-question,” said Lithgow to an audience of about 40 people on a rainy November evening. “Which is: Why have women been left out of history? Specifically, Holocaust history.”

Lithgow was moderating a panel conversation called “Giving Women Their Place in Holocaust History,” in connection with the exhibition. She was joined by journalist Marisa Fox; Elisa von Joeden-Forgey, a professor of Holocaust and genocide studies at Richard Stockton College; and historian Rochelle Saidel, director of Remember the Women Institute, a cosponsor of the event.

“A lot of women’s experiences during the Holocaust had to do with the biology of being a woman,” Saidel said at the event. “Not only vulnerability of sexual violence but menstruation and childbirth and forced abortion and forced sterilization. And all of these things are women’s experiences that need to be talked about.”

There are several reasons why such things have not been talked about, according to the panel. To begin with, women as historians “is a phenomenon of the late 60s and 70s,” said Lithgow, and the field of Holocaust studies in particular has long been dominated by men. Only in 1983, when Esther Katz and Joan Ringelheim led a conference at Yeshiva University’s Stern College about women’s experiences in the Holocaust, did the subject begin to be widely addressed.

“It was controversial,” said Saidel. More books and scholarly articles followed in the 1990s and 2000s. But as the documentation of survivors’ stories ramped up, many interviewers were either too uncomfortable or simply untrained to ask about sexual violence.

Additionally, while Holocaust survivors have been encouraged to talk about their general experience, there is still a special stigma against the sexual violence that women suffered.

“There was a tremendous amount of shame,” said Fox, whose mother was a survivor. Many women who survived were often asked with distrust “What did you do to survive?” she added. “They were looked upon with great suspicion.”

Fox also told of her experience visiting Auschwitz to research women’s experiences and finding very little direct testimony. What she did find was a dismissive attitude from some of the historians there. “I just couldn’t believe how little women’s narratives count, especially at a place like Auschwitz,” she said.

The panelists pointed out that much of the violence against women at the concentration camps continues in some parts of the world today. “These stories and the stories of the women in the exhibit really, unfortunately, have a lot of resonance today and in many other instances of genocide,” said Lithgow.

Modern-day genocides, in Bosnia for example, or more recently in Sudan, use sexual violence against women as a tool of physical and cultural destruction. Acknowledging this often changes how one understands the overall campaign of violence, said von Joeden-Forgey.

“Frequently when we begin to do research on women’s experiences in the Holocaust or genocide, we begin to see the crime differently,” she said. “New things come to light. The behavior of men can be addressed or analyzed in a new way. It changes our view of history.”

Reinserting Women into the Holocaust Narrative