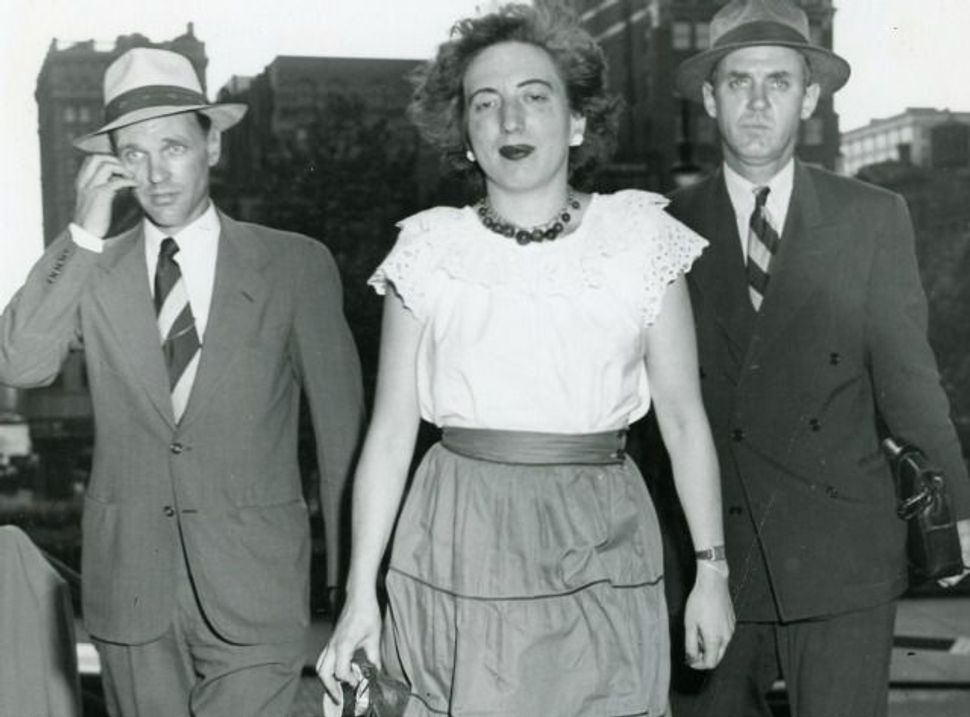 Only one day after publishing a front page article relaying FBI Director J. Edgar Hoover’s demand that all “patriotic” Americans help their government reveal so-called dangerous activities of local communist sympathizers, the image of a neighborhood Jewish woman, arrested on espionage related charges lit up the pages of the Forverts.

On July 29, 1950, Miriam Moskowitz, as seen in the original archival photo in a modest tiered skirt and summery blouse, was photographed walking to her arrest proceedings. Surrounded by FBI agents on both sides, she strode with eyes slightly downcast, head facing upwards and lipstick firmly in place.

Turning the pages of the next day’s Forverts, skipping past the page four in-depth reporting on new evidence about Trotsky’s 1934 assassination, beneath a short article on the United Nation’s troops being sent to Korea—one would read of the long of secret session held that past Saturday by the Federal Grand Jury where they heard testimony leading to Moskowitz’s arrest. Clearly impatient and perhaps even desperate to learn more, the Forverts set out to talk to the suspect’s neighbors.

On July 31st, beneath headlines detailing ongoing American battles in the area of Busan, Korea, the Forverts published a cropped image of Moskowitz, without the G-men at her side. The lead article reported back from Moskowitz’s neighbors in Chelsea, at her home on Eighth Avenue near 18th Street, at the time described by the Forverts as ‘seedy.’

Moskowitz boarded in a small three room, 4th floor walk up, along with two families. Unsurprisingly, nobody was home when the reporter dropped by, and neighbors, seemingly foreshadowing the wide net of suspicion this case would cast, were reluctant to speak openly. Those who did said they didn’t see her frequently, but recalled her as ‘lovely and charming.’ One even said ‘you ask if I’m surprised? Nope. Nothing surprises me anymore.’ The building superintendent, noted by the Forverts as being a German, adamantly repeated that he knew nothing about the tenant, received the rent payments and conducted repairs as needed. The building, the Forverts concluded, was full of both families and the newly divorced. Nobody really knew their neighbors.

Moskowitz, they noted, was the only woman arrested so far in connection with espionage. Indicted, on lesser charges of conspiring to lie to a grand jury, she was sentenced to two years in prison and a $10,000 fine. Awaiting imprisonment, she was temporarily placed at the New York Women’s House of Detention in Greenwich Village—where today the Jefferson Market Garden flourishes. As espionage related arrests spread, Moskowitz would soon find herself in the company of a local Brooklyn “shvester” when Ethel Rosenberg was held there too. Decades later those same cells would confine notable arrestees such Catholic activist and writer Dorothy Day, and even the scholar and revolutionary Angela Davis.