‘Taking Back The Party’ at the University of Virginia 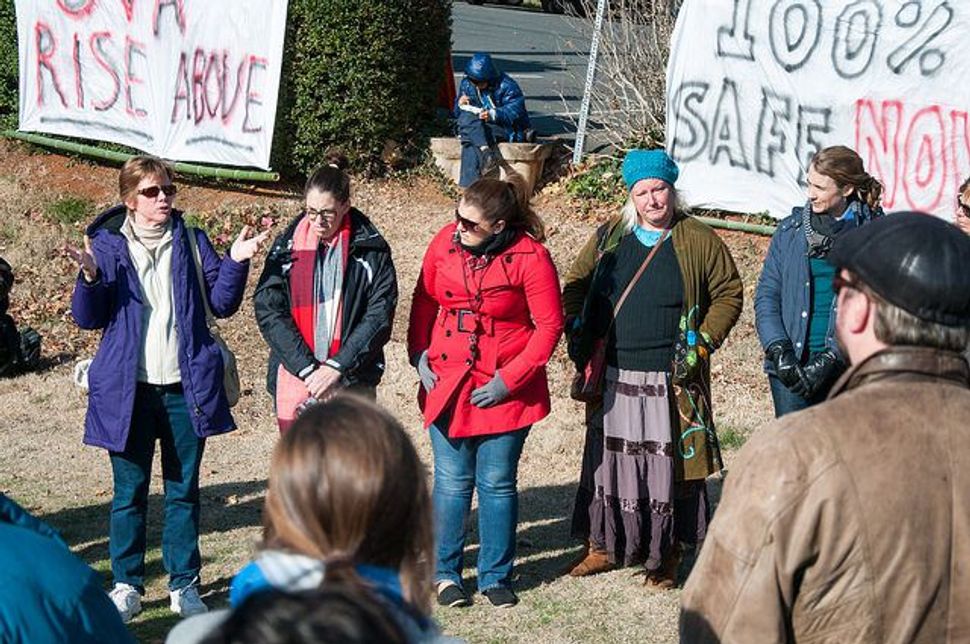 On Saturday night, I stood on Rugby Road — University of Virginia’s now-infamous fraternity row — shoulder to shoulder with fellow English graduate students and faculty in full regalia. Some of us repainted the side of Beta Bridge — a frequently-used canvass for everything from displays of team spirit to praying for the return of missing student Hannah Graham — with the night’s slogan, “Take Back The Party: End Rape Now!” We held signs — “Throw Parties that Respect Women’s Bodies”; “Party Safe: Don’t Rape” — and chanted: “What do we want? An end to rape! When do we want it? Now!”

This was one of many rallies sparked by Sabrina Erdely’s recent Rolling Stone article describing the horrific gang rape of Jackie, a U-Va. freshman in 2012. Since the incendiary article, U-Va. president Teresa Sullivan has released a total of eleven statements, one of which promised to suspend frats until January 9th (conveniently, the weekend before second semester begins). Overall, the many statements coming from U-Va.’s administration have felt, at least to us in the graduate community, more interested in saving face than in the safety of its students. Sullivan, among others, has invoked Thomas Jefferson, U-Va.’s founder, saying “Jefferson, as he always does, provides a compelling backdrop: It is more honorable to repair a wrong than to persist in it.” The irony in quoting a slave-owning rapist in this context has not been lost on us.

As we stood on the bridge Saturday, cars and pedestrians returning from the big game — U-Va. v Miami — passed by, some people staring, some people cheering along or applauding us. We marched up and down Rugby, and then to “The Corner,” a collection of bars and restaurants by Grounds, frequented by undergrads. As we marched by a particularly packed bar, some men gathered outside and on the balcony shouted at us — “We’re not planning on raping you!”; “Do something productive with your lives for a change!”

The reaction among undergraduate students has been mixed. Some are outraged — though unsurprised — by Jackie’s assault and subsequent difficulties seeking justice; some are outraged by what they see as a tarnishing of U-Va.’s reputation; some try to balance sympathy for Jackie and others with school loyalty; others have remained silent, perhaps unsure of what to think.

The reaction in my circle — English and Creative writing graduate students and faculty — has been near unanimous: outrage, anger at the administration, and a determination to do something, to use our powers as critical thinkers, writers, and educators to protect our undergraduate students and uproot a deep cultural problem.

Over the past few days, one of the administrators to come under the most ire has been Dean Nicole Eramo, the woman responsible for handling student complaints of assault, and whom Erdely’s article portrayed as a somewhat ineffectual but much-loved figure. In a video interview released Saturday, Eramo, discussing informal resolutions with people accused of assault, alarmingly stated that “there’s really no advantage to admitting guilt…and I feel like if a person is willing to come forward in that setting and admit they violated the [sexual misconduct] policy, that does deserve some consideration.” Yet other students have spoken to her kindness in dealing with their assaults, and Eramo’s statement is not unique to her; no one in U-Va.’s history has been expelled for rape.

Saturday’s protest ended outside the steps of the offending fraternity, Phi Psi, where undergraduates, grad students, and professors spoke to a cheering (and freezing) crowd. Among the professors who spoke were former Poet Laureate Rita Dove and Gender and Sexuality professor Susan Fraiman, who was also largely responsible for organizing the protest. Prof. Fraiman addressed our slogan for night, reminding us that “we’re not here to stop the party. But we’re here to make the party safe for everyone…there are problems with the way social life is conducted on this campus. [It is] centered on fraternities, and as a result, men control who enters a party, and women are not on their own turf.”

Together, graduate students and faculty have organized a teach-in this past Monday, a protest at Tuesday’s Board of Visitors’ emergency meeting, and several meetings to discuss how we can teach consent; if and how we can amend U-Va.’s new proposed Sexual Misconduct Policy; and if and how we can change the central nature of Greek life on campus.

Although Saturday’s protest was fueled by sadness and rage, it was also a beautiful display of solidarity among men and women, faculty and students. It was energizing, marching and shouting in the cold, and it ended on both a note of solemnity in recognizing the enormity of the problem – a deeply embedded rape culture and a history of prioritizing the school’s reputation over safety – and on a note of hope for what we might be able to accomplish.

Rita Dove summed up both these feelings in a short but powerful speech:

While all of these efforts make me proud to be a part of U-Va.’s English department, the problem does not begin or end with Dean Eramo, or fraternities, or even the entirety of the current administration. Rape culture is deeply embedded in this country, and like many schools currently under Title IX investigation, U-Va. has long protected that culture.

Acknowledging this, Fraiman ended her speech with an important reminder of one of the many changes that needs to take place:

‘Taking Back The Party’ at the University of Virginia