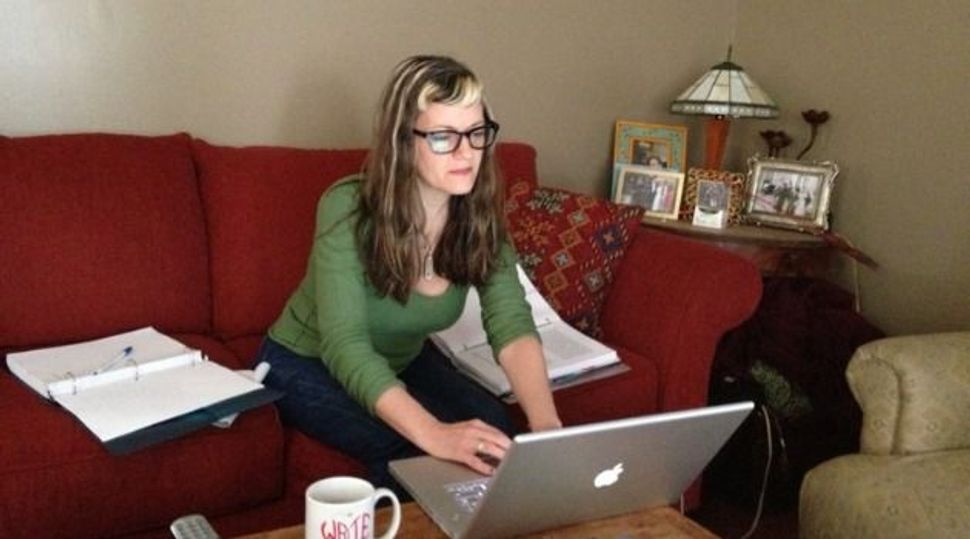 When the rent doubled on Botton’s former-yeshiva-turned-apartment on Manhattan’s Lower East Side, the freelance writer, cultural Jew and daughter of famed Sephardic retired Cantor and musical director Richard Botton, moved to upstate New York with her musician husband. This incident sparked her surprise, best-selling first anthology, “Goodbye To All That.” These essays, by well-known writers who also had trouble affording New York, discuss a deep love for the city, but also the challenges one faces when rent becomes unaffordable and the struggle becomes overwhelming. “It’s an anthology about the idea of leaving New York,” Botton said at a recent interview in the Village.

Batton spoke to the Forward’s Susie Kantar about her adoration and continuous love affair with her of her former home. After she published, “Goodbye To All That,” critics wondered if she still possessed the same admiration she once did for New York. She absolutely does, and that’s clear when one reads her piece, “New York Cool,” in her incredible second anthology.

Susie Kantar: You no longer live in Manhattan. Are you inspired to write outside of New York City?

Sari Botton: I needed to go away and being just to the side of the city is great. I lived on the Lower East Side, on 8th street and Avenue B, for a dozen years in an orphan center, turned yeshiva, turned my home. I lost that apartment when the rent became unaffordable. I’m not a house person, and I wanted an unconventional space. I now live in a loft with my husband in Kingston, in Upstate New York.

How did you rally so many big writers for “Never Can Say Goodbye?”

I wanted writers who were braver than me, and I’ve been building relationships for years. For a long time I didn’t think Twitter and social media mattered all that much. I was wrong, all of that stuff is so important. Both Touchstone, (my publisher) and I had wish lists of authors. We narrowed it down and met in the middle. I had always planned to have pieces in both books because selfishly, I wanted to surround myself with good writers.

Was your process different for this book?

Everything happened more quickly. I solidified my deal in January and the book was due April 1. I was on such a time constraint that I got the shingles, flu, strep throat and a sinus infection.

Originally, “Never Can Say Goodbye,” was intended to be compiled entirely of male writers and their stories. Why did this change?

When my agent approached publishing houses, they almost universally felt it would be better to include men and women. I think it’s more interesting that way. I wanted to get to a place where we were all just writers, not women writers or men writers.

Who is your favorite author in this anthology?

Oh no! Sophie’s Choice, that’s so hard! I adore Jon-Jon Goulian. Adelle Waldman was open. Maggie Estep would have been in the book. I saw her on February 7, and on February 10, she died. She was a feminist and didn’t care what anyone thought. I was in awe of her; she was an idol. I was very much affected by her and her death. She was only one year older than me when she passed.

You’ve written for The New York Times, Marie Claire and The Village Voice. What advice would you lend to aspiring writers?

Keep at it. I had a tradition for submitting my pieces. I would take an index card and write nineteen no’s and one yes. When twenty were crossed off, I would flip it over and make another list. If you’re going to write about New York, don’t do an essay such as, “New York is like this.” Instead, make it super specific and personal.

Tell me about your Jewish background. How do you identify yourself?

I was raised on Long Island, in Long Beach, Island Park and Oceanside. My family is reform. I went to Hebrew school, but learned just enough phonetic Hebrew to perform my Torah portion at my Bat Mitzvah. As a Jew, your roots aren’t just attached to a nationality. Wherever my family was in the world – Germany, Russia, Greece, Turkey – they were Jews, not Germans, Russians, Greeks, or Turks. So the culture I’m from, which influences my tastes, consciously and unconsciously, is Jewish culture. I throw Yiddish words around, but that’s more New Yorkish. I’ve had issues with organized religion since I was forced to break up with my first boyfriend because he wasn’t Jewish.

Have you spent time in Israel?

I attended my sister’s wedding in Israel a week before 9/11, the same week Colin Powell left an apartheid summit in South Africa because people were saying Zionism was apartheid. There were five car bombings in Jerusalem in 36 hours. Therefore I wasn’t terribly at ease. I didn’t see much when I was there because it was such a scary time. I didn’t go to Jerusalem- only stayed in Tel Aviv. There are Israelis in my family, and I want peace, but a peace that is respectful and humane toward Palestinians and all religions.

What do you do for the TMIProject?

TMIProject offers moth-style true storytelling workshops in jails, shelters, schools, mental health associations, LGBTQ centers, and other places where people don’t often get to tell their stories or be heard. We offer one-day workshops, weekend retreats, and weekly classes. I love helping other people tell their stories effectively, especially people who have been somehow marginalized or stigmatized, and don’t have much power. People, who don’t typically get to speak their truth, like LBGTQ teens, domestic violence survivors, incarcerated teens, adults working on their mental health.

How does it feel to have the book out?