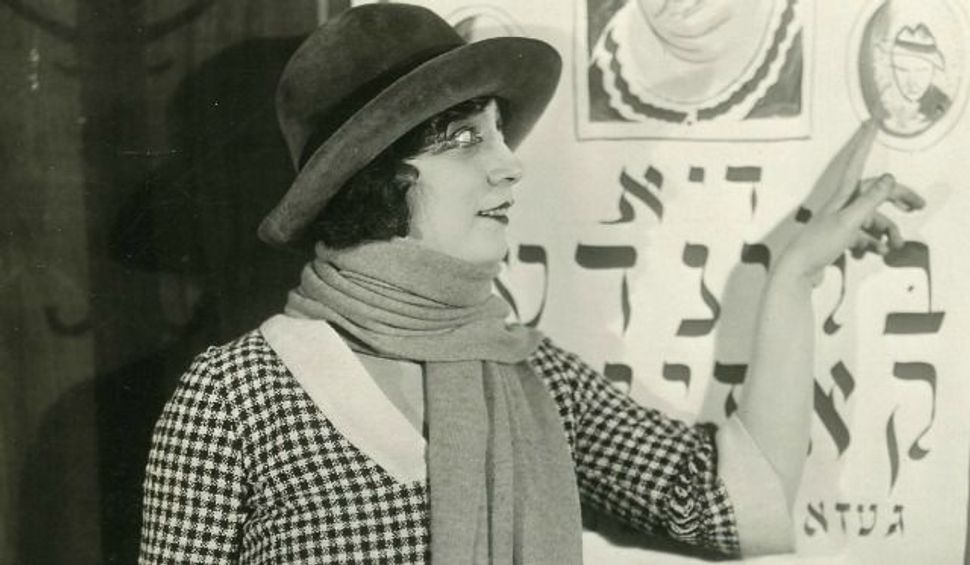 In 1926, Berta Gersten was photographed to publicize a play she was starring in called ‘Gevald—When Will He Die?’ a three act comedy by Forverts humorist Khone Gottesfeld, produced by the Yiddish Art Theatre of Second Avenue.

Born in Krakow, Poland in 1895, Berta Gersten immigrated with her family to America as a child where she began performing in Vaudeville. It wasn’t long before famed theatre impresario Kessler spotted her there and hired her for his Yiddish theatre. After several years there, she made her way over to the acclaimed Thomashefsky’s theatre.

Moving on once more, she became a founding member of Maurice Schwartz’s Yiddish Art Theatre, and the rest, as they say, is Yiddish theatre history. She was one of those few rare performers who was on stage from early in youth, until the very end of their lives.

Long admired by Yiddish theatre fans for her warmth, the regal figure she envisaged and the splendid majesty she displayed on stage, it was the compassion she imparted there, her deep magnetism and allure that was said to attract viewers. In 1954 she had her Broadway debut, appearing in Clifford Odets’ play, ‘The Flowering Peach,’ where she was described as a beloved figure who brought to the stage a unique tender charisma that drew one’s attention. She followed that with a tour in ‘A Majority of One,’ a play about racial prejudice, appeared on film as clarinetist Benny Goodman’s mother in ‘The Benny Goodman Story,’ and in television’s ‘Playhouse 90’ and ‘Omnibus.’ In Gersten’s September 1972 obituary, written by Forverts theatre page editor and playwright Yakov Ben-Ami he cited her actor’s credo. At the last meeting of the Yiddish Actor’s Union of New York, in June of that same year, Bertha Gersten said that ‘it’s not the years that need reckoning, but rather, as acting is your life, a theater artist’s defining traits and scenes throughout their life within which those characteristics appear — that in the end, come to define an actor—not one’s looks.’

For Gersten, according to Perlow, this wasn’t merely a philosophical stance. Alternately described as a phenomenon, a magnificent figure and a bewitching performer that attracts and affects you, she was also known to be a loyal friend, supporter of Jewish causes and of Israel—and a humble philanthropist to those around her in need.

Theatre was Bertha Gersten’s life. She was set to act this coming season at the Eden Theatre in I.J. Singer’s play ‘Yoshe Kalb’—performances which Perlow noted had to do with how she appeared as well as her stagecraft. For over half a century, Berta Gersten’s work on the Yiddish stage created a vast repertoire of roles including those from Shakespeare and Ibsen, Strindberg and Chekov, IB and IJ Singer, Gordon, Sholem Asch and Sholem Aleichem. From classical as well as modern literary work. The reader turning the pages of that September’s Forverts, passing a banner ad for sweet Jewish New Year treats at ‘Karlyn Bakery’ on Grand Street, was reminded by Perlow that here in New York, we once had the privilege to see Berta Gersten play great Yiddish theatre.