5 Stories About Dinah Way Crazier Than ‘The Red Tent’ 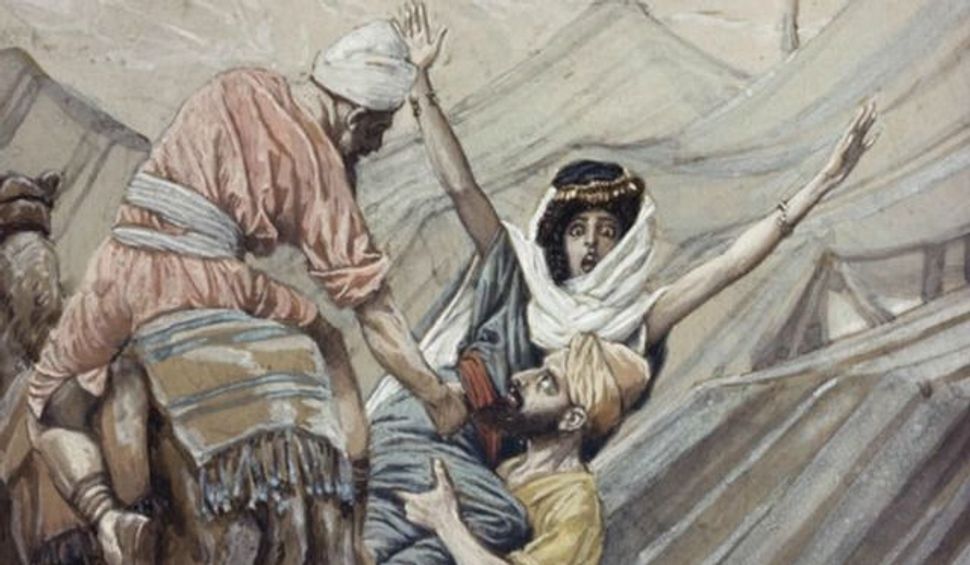 Seduction of Dinah, Daughter of Leah by James Tissot

For some, Anita Diamant’s retelling of the biblical Dinah story — and adapted Lifetime miniseries — takes too many liberties with the biblical text. But Diamant’s version of events is almost banal compared to stories regarding Dinah found in midrash and other biblical commentaries. Here are five such tales that may deserve their own Lifetime movie:

1) When Leah — Jacob’s wife, Rachel’s sister — was pregnant for the seventh time, she became worried that Rachel had only one son while she had six. She prayed to God and God turned her fetus from male to female and Dinah was born. (Rashi)

2) Dinah is the only daughter of Jacob mentioned in Genesis. The midrash acknowledges that unlikelihood and explains that each of Jacob’s twelve sons was born with a female twin who would become their wife in the future. This also solved the quandary of who the brothers married if Canaanite women were forbidden. (Genesis Rabbah)

3) When Jacob went to his showdown with Esau, he was so nervous Esau would claim Dinah as a wife, he hid her and locked her in a trunk — an earlier midrash claims the same thing happened to Sarah in Egypt. (Genesis Rabbah)

4) Dinah had a child named Osnat from her relationship with Shechem. Osnat was so resented in Jacob’s camp that she was sent to Egypt via the angel Gabriel or Dina herself. Osnat was taken in by the wife of Potiphar and eventually married Joseph when he found himself in the Potiphar household. This again solved the problem on one of Jacob’s sons marrying out of the family. (Midrash Yalkut Shimoni)

5) After the Shechem story, Dinah marries Job (as in Book of) and has ten children — other sources say 20. (Bava Batra)

5 Stories About Dinah Way Crazier Than ‘The Red Tent’