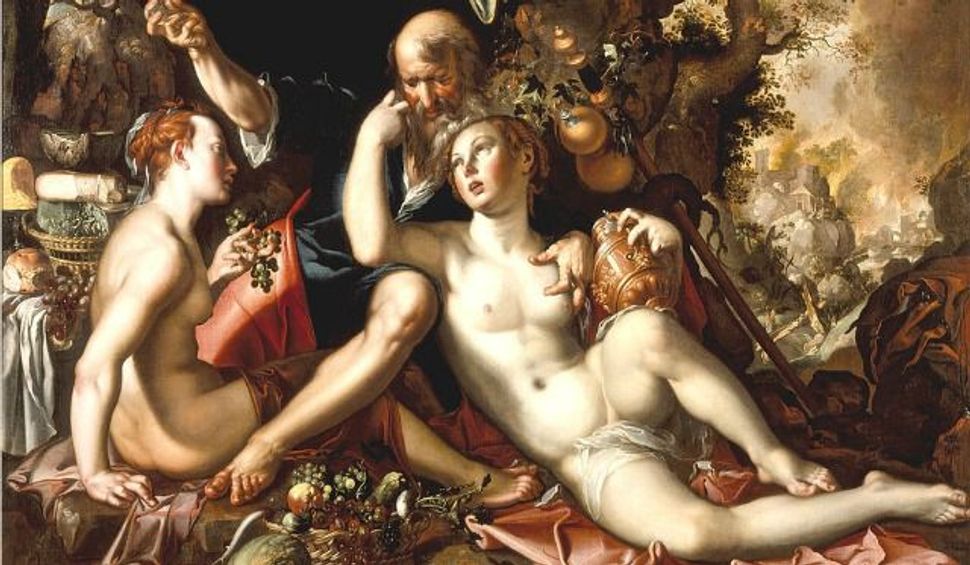 Lot And His Daughters by Joachim Antonisz Wtewael (c.1600)

If you ever wonder why a movie got the rating it did, there’s a box at the bottom of every movie poster that explains not only what the rating is, but also its reason. So, if you object to violence but not sex, or drugs but not foul language, you can know whether that movie is likely to offend your sensibilities. These little boxes allow us to selectively choose our vices, while avoiding those we find unappealing.

The Torah has no such warning labels. The holiness of standing at Mount Sinai is juxtaposed with the plague of idolatry, and the sordid tales of the sexual escapades of the Israelites and Midianites immediately follow the blessings of Bilaam. Genesis is especially diverse, interspersing stories of blessings given and covenants fulfilled, with war, murder, and sex both permissible and illicit.

These juxtapositions are especially clear in Genesis 34, where Jacob’s daughter Dinah is taken and raped by a foreign prince. Upon hearing of the violation of his daughter, Jacob remains silent, leaving the response to his sons. And two of those sons, Simeon and Levi, use the rape as an excuse to commit genocide against the city of Shechem, killing all of the men and reaping the city’s spoils. Surely, this is not a story for children.

And indeed, if you ask the average middle school student at a Jewish day school if they know this story, you will likely be met with a blank stare. Like the second half of Genesis 19 (where Lot’s daughters get their father drunk and then have sex with him) or Genesis 38 (where Tamar dresses up as a prostitute and becomes pregnant by her father-in-law), these stories are NC-17. Skipping them isn’t revisionist; so much as a responsible evaluation of what is age-appropriate.

Recently, I learned the story of the rape of Dinah with a lovely 7th grader I tutor. We’ve been spending most of our time on the stories that her former day school had skipped over because of their explicit content. When we got to the end of the story of Dinah, a light of recognition rose to her face. As the Torah described Simeon and Levi’s murderous rampage in the aftermath of Dinah’s rape, she said, “Oh yeah, they taught us this story! They just didn’t tell us why they killed everyone.”

What became clear to me, then, was that the story wasn’t skipped because of its overall troubling nature, but because of its emphasis on sex. Simeon and Levi’s mass murder is acceptable to teach children, but the sexual act—in this case, one that was violent and without consent—remains off limits. Violence needn’t be censored, but sex is feared.

This reluctance to talk openly about sex is in opposition to most of Jewish history. Rachel and Leah openly discuss who will have their husband that evening, with Leah trading fertility tools for access to Jacob (Genesis 30). In the Talmud, Rav Kahana hides under Rav’s bed to learn the proper way to have sex with his wife (Brachot 62a). Imma Shalom, R. Eliezer’s wife, explains her children’s beauty by speaking about her husband’s behavior in the bedroom (Nedarim 20b). There is even a conversation about penis lengths of different rabbis (Bava Metziah 84a). So where did this prudishness come from? Why is sex so threatening to us and our children?

In recent years, much has been made of the sexualization of young children, with the advent of things like skinny jeans for babies and string bikinis for five year olds. Meanwhile, in the Orthodox world, emphasis on dress codes has increased to the degree that girls claim they feel predatory. Sexuality, and its boundaries, are a live issue in our culture. So why are we so afraid to teach what Judaism says about sex?

I am not advocating introducing Judaism’s entire sexual narrative to children of all ages. We need to think carefully about what is age appropriate, and how to introduce the Jewish sexual ethic (and the places where it is violated) into our classrooms. However, if two of Jacob’s sons committing mass atrocities is deemed appropriate for discussion, shouldn’t the cause of that violence be as well?

Issues of sex, not to mention rape, incest and desire, are awkward for us to talk about. Surely, many parents would prefer to avoid the uncomfortable conversations that would inevitably arise from a full study of Genesis 34. However, covering our ears to the realities of our tradition, and to the realities of sex and sexuality, will only lead to more confusion and shame later on.