Learning to Conquer My Daughter’s OCD — And My Own 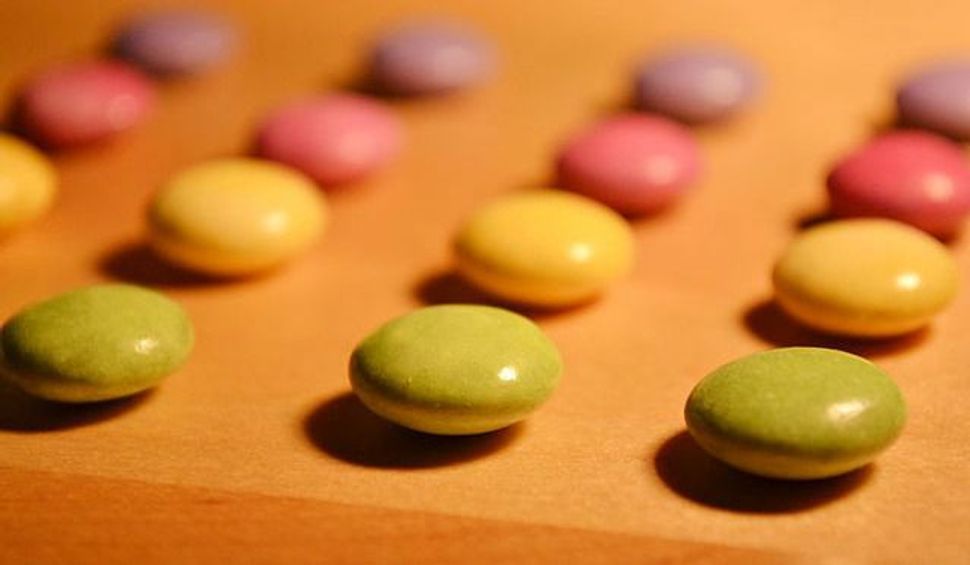 (JTA) — As I lay in the hospital bed with my new daughter Sonya’s slippery skin pressed to mine, I knew this would be the scariest day of my life. It was the first day in 25 years that I ever willingly skipped prayers.

I’d been in treatment for severe obsessive-compulsive disorder for most of my 34 years. I’ve cut myself, starved myself and scrubbed my hands raw. I kiss our apartment mezuzah one, two, sometimes 50 times, and our family is hardly observant. But daily prayer is the one healthy practice I’ve kept the longest, and it’s grounded me when I feel most unmoored. It’s also been the hardest to explain.

Growing up, we belonged to a Reform synagogue and had chicken soup and challah for Shabbat every week. My mom taught my brother, sister and me to say the Shema prayer before bed each night. It gave closure to each day and made my mom smile, and that was all I needed.

But soon one Shema wasn’t enough for me. When I was 11, my aunt and father died in short succession. I was sure it was my fault, and I had to atone before I struck again. After my mother would tuck me in, I added five, 10, 20 recitations, a song of thanks and a list of sick people I needed to heal. I remember nights when I woke up frantic and hot, furious that I’d fallen asleep despite more prayers to say, kisses to blow to the heavens.

In high school I snuck into dark closets not to kiss boys but to chant Psalms. I went on medication briefly in college, but took myself off fearing it was blasphemous and my mom would die next. When I moved in with my future husband, Jay, he watched me kiss my mezuzah urgently.

“I just wish you felt like you had to kiss me 250 times when you walked through that door,” he said, his sadness palpable.

Now in the hospital with a newborn crying for milk, I had someone I could actually take care of with my hands instead of my prayers. I looked through the hospital window and smiled shyly at the sky: I wanted Him to know I was so wildly grateful for this child that no words could suffice. I held Sonya tightly and babbled at her to fill the empty space that was my fear.

Those first 24 hours were a terrifying relief. No one died.

But the bliss of those first coos and milky grins soon hardened. On Sonya’s fourth day, I left her upstairs with Jay while I went down to our basement and sat on a pillow, sore and shaky. I wanted desperately to thank Him for this miracle, to pray with an honest, open heart, no mindless repetitions and rituals. I was too evolved, too in love with this new human to simply follow a pattern blindly. And yet, motherhood could never be a remedy for OCD. I left Sonya in Jay’s arms each morning so I could pray regularly, insistently.

My life outside the basement became a series of new, unwavering practices, too. Repetition was supposed to be comforting for children, I reasoned. Every evening I massaged Sonya’s toes and sang a series of lullabies. When I felt too exhausted and cut off a verse, the tug of fear closed in. If I don’t sing to her, I’m unfit to be a mother. If I don’t beseech God, Sonya will disappear, too.

At first, Sonya seemed oblivious: She fell asleep in the middle of a meal or refused to nap in her carrier. One night I tried to light the Shabbat candles with her and she banged on her highchair howling until I blew them out. She had her own rhythm, her own needs, completely out of sync with mine. Each time she squirmed away during massage, I pinned her down and started again, both of us whimpering. I coped the only way I knew how — by adding more rituals and repetitions. Sonya followed my lead, and as she grew, I watched her running headlong into the spiral I knew too well.

“Last one,” I repeated. I leaned down to give her one more. But she still screamed as I left. Some nights I went up there three or four more times, trying to slay both our demons. Other nights I sat at our kitchen counter and came up with all the fatal illnesses she could have. Hours after I’d been up, I heard her mumbling,

It was too familiar. I remembered myself as a child whispering in half-sleep those prayers and how I could never find the end of the Shema. So I worked with my doctor to find sanity not only for myself but my child, too. And there did come a day — when she was close to 3 — when I was able to tuck my daughter into bed, read her two books, sing her a lullaby and walk toward the door.

“If you say last kiss, it has to mean last kiss,” I said calmly. “Otherwise it’s just words.”

I cut us both off. We waited in the dark, hearing each other pant. And then I landed on not an answer but a question.

“What do you think happens after last kiss?” I asked.

This was the unknown she had witnessed in me every day — the tension and also the hope.

Sonya thought about and said, “Mama, go to sleep and have cup of tea.”

“Exactly,” I told her proudly.

Chronology and logic were unimportant. It was the trust. That we were both here for each other, that the world would keep spinning, and it was safe to close our eyes.

Abby Sher is a writer and performer living in Brooklyn. She is the author of “Amen, Amen, Amen: Memoir of a Girl Who Couldn’t Stop Praying (Among Other Things)” and “Breaking Free: True Stories of Girls Who Escaped Modern Slavery.” Her writing has also appeared in The New York Times, the Los Angeles Times and Elle magazine, among other publications.

Learning to Conquer My Daughter’s OCD — And My Own