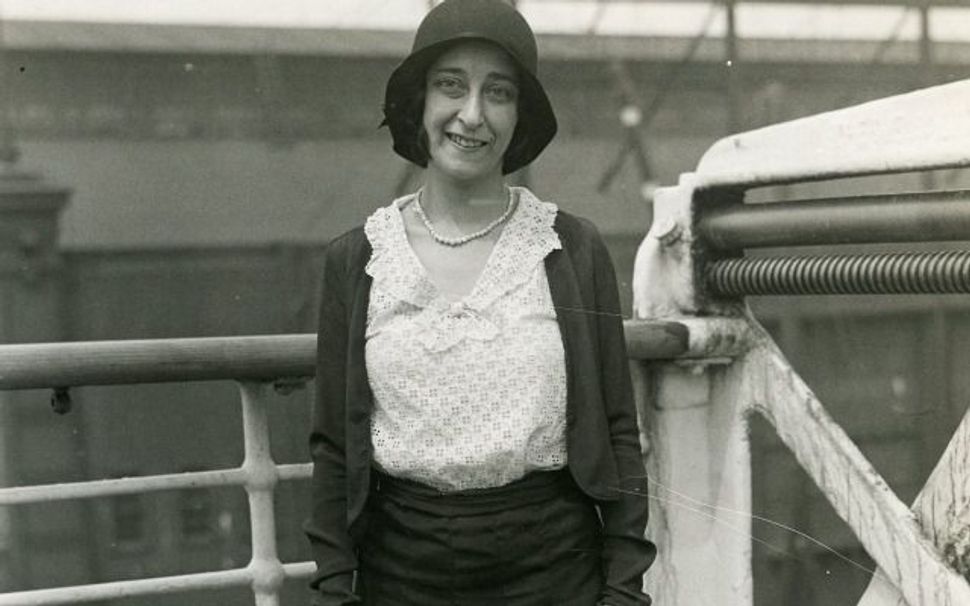 If Socialists borrowed more from Jewish dynastic traditions, and had been in the habit of producing a yikhes briv charting one’s pedigree, Gertude Weil Klein’s would be pretty impressive. Her father, Joseph Weil created the emblem for New York’s Socialist Party. It featured an arm holding a torch symbolizing liberty, and can be still seen on the original Forward building at 175 East Broadway here in the city, and on our early mastheads.

A committed multi-tasking labor lawyer, Joseph Weill was known as someone willing to perform any task necessary, from sweeping meeting halls to writing and lecturing on socialism. Reportedly, when Forverts founding editor Ab Cahan gave his first outdoor address, he did standing on a platform constructed by Weil. Her mother, similarly, taught political science at Columbia University, the New School for Social Research and the Rand School for Social Science. To support the 1912 tailor strike, Weil was instrumental in organizing what was considered the largest emergency kitchen, at the Brooklyn Labor Lyceum, where the entire Weil family worked.

As seen here in our archival image, Gertrude Weil Klein set sail in 1921 for the International Socialist Congress in Vienna having won a trip offered by Socialist journal, ‘The New Leader’ for enrolling the most new subscribers. Already charting her own course at the time, Gertrude was employed as secretary to General Manager Abraham Shiplacoff of the Amalgamated Clothing Workers of America, the preeminent garment workers’ union founded in 1914, currently known as United Needle Trades, Industrial and Textile Employees. Weil eventually rose to become educational director for the Amalgamated.

By 1941, Gertrude Weil Klein, was one of the first women, out of three total, elected to City Council, as an American Labor Party candidate from the Bronx. Among other activisms, she brought to the council’s attention the needs of Bronx area youth who were trending towards membership in gangs, focusing on the relationship between gangs and anti-Semitic and racist behavior.

Re-elected in 1943, by 1945 she was running as an independent, because the party refused to accept her running for a third term. Despite Mayor Fiorello La Guardia’s support, she lost to the party’s candidate, Michael J. Quill, who also happened to be president of the Transport Workers Union. Weill pressed on to become director of community service for Sachs Quality Stores Inc., at 150th and Third Avenue, sometimes called ‘Saks Third Avenue.’

Even early on in his political life, her father Joseph Weill was known to be highly tolerant of ideas, believing publishing a credo in 1918 saying: ‘our legislators are far from understanding the social conditions and difficulties pressing upon the poor and making their lives miserable. A little self-control and tolerance do more to bring about an understanding than anything else I know of’.

A published writer and fervent political activist, throughout her lifetime Gertrude Weill Klein successfully forged her own path, bringing nakhes to the yikhes that was her progressive birthright.