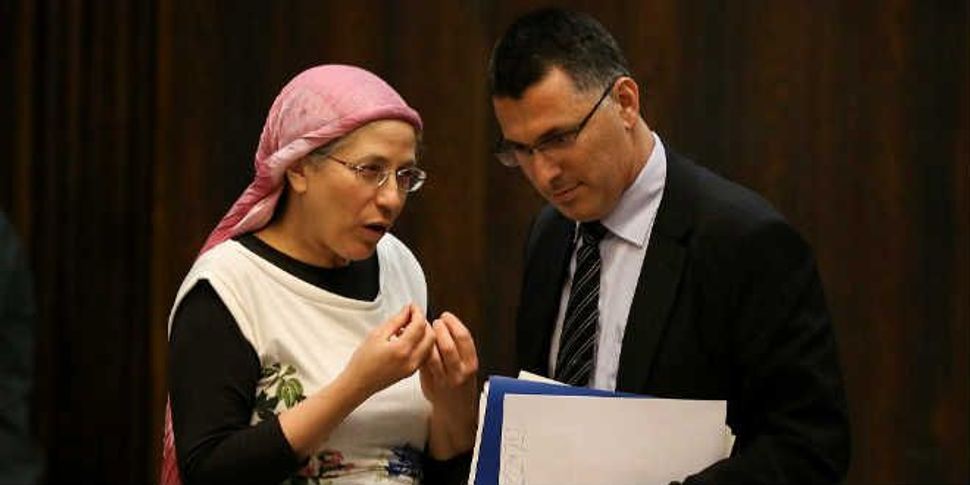 Orit Struck may be a leading figure in the Tekuma [Revival] bloc of the Bayit Ha-Yehudi [Jewish Home] party in Israel, but it appears feminism “struck out” in its latest turn at electoral bat. This week, the ultra-hawkish faction of the right-wing party withdrew its threat to abandon Natfali Bennett for a new ultra-Orthodox Zionist movement. Struck celebrated the decision as a victory for feminism, since she would have been forbidden as a woman to run in the new party. Yet, more likely, this was yet another backroom deal amongst male politicians.

Struck is an unlikely feminist heroine in recent Israeli political history. A sabra, she grew up in Jerusalem and became a “baalat teshuva” as a teenager, gravitating toward religious Zionism. For the past 30 years she has lived in the Jewish enclave in Hebron, where the 54-year-old mother of 11 made her reputation as a firebrand extra-parliamentary political activist. In 2013, she was elected to the 19th Knesset in the tenth spot (of 12) of the Jewish Home list, joining female colleagues Ayelet Shaked and Shuli Mualem.

The party shakeup began in early December, when MK Eli Yishai split with former felon and political come-back kid Rabbi Aryeh Deri and the Shas party to form his own movement called Ha-am Itanu [The Nation is With Us]. Yishai then attempted to woo the disgruntled hawks of the Tekumah faction — who consider Naftali Bennett and his secular outreach campaign soft by religious standards — to join him. A deal seemed imminent; it appeared to the men as a win-win for both groups in strengthening their commitments to the land, Torah, and people. Only one woman, Orit Struck, would be a clear political loser, banned from seeking office on the ultra-Orthodox list.

Yesterday, Tekumah head and long-time settlement activist Uri Ariel called off the engagement, hailing the decision as triumph for democracy and the best interests of the party. Journalist and political commentator Lahav Harkov also saw it as a victory for women’s suffrage, quoting Struck’s self-centered analysis that “there was almost full consensus that [banning women] doesn’t work for us…it clearly influenced the decision,” adding, “I’m glad there was a consensus that matched my opinion on this matter.” Yet, there is little evidence to support this interpretation — more likely, her male colleagues were less concerned about feminism than (political) favor, seeing they had better chances of keeping their Knesset seats by remaining within the Jewish Home than joining Yishai’s faltering new party. Struck may have won the battle, but seemingly lost the war.

Struck’s feminist crusade has a long history that finds its origins in the early years of religious Zionism, when the first chief rabbi of Palestine Rav Abraham Yizhak Ha-Cohen Kook famously rejected female suffrage. Nonetheless, since 1967, a settler world dominated by rabbis and scruffy male leaders could not have succeeded without its female half. Women like activist Daniella Weiss or parliamentarian Geula Cohen become household names. However, with a growing constituency of ultra-Orthodox settlers — who are the single largest group living in the West Bank today — the role of women in ultra-nationalist politics may face renegotiation. Like their sisters in the Palestinian national movement, it remains to be seen for how long feminist goals can and will be subordinated to male (ultra) nationalist agendas. Yet, if as recent polls forecast, Tzippi Livni becomes the first female Prime Minister of Israel in 40 years, it may benefit all women in Israeli political life — even Orit Struck may finally hit a “home” run.