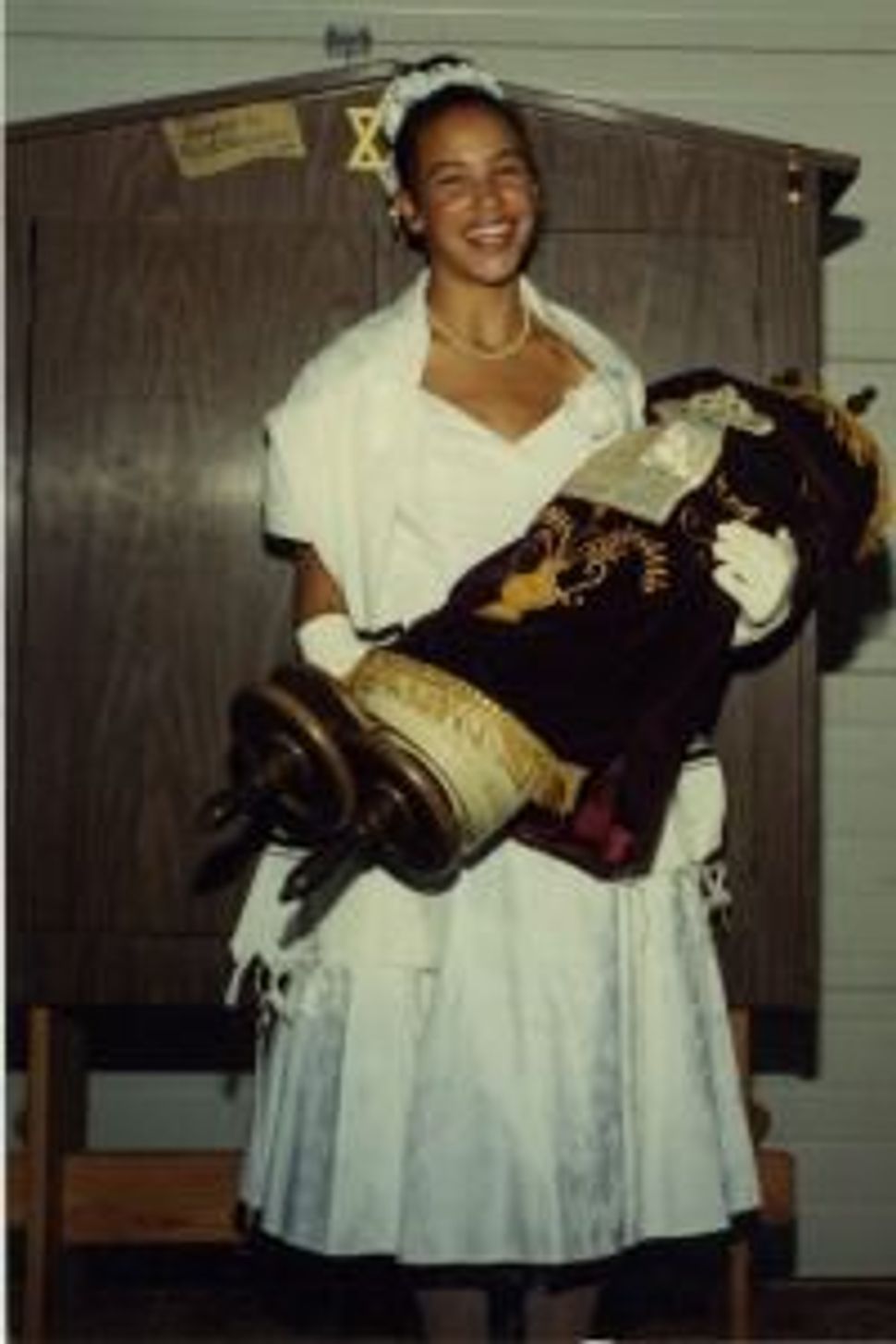 Lacey at her Bat Mitzvah Image by Peggy Schwartz

Lacey Schwartz at the age of 2 with her mother, Peggy, in an image from “Little White Lie.”

When Lacey Schwartz was accepted at Georgetown University, it was a dream come true. It also blew the lid off a tightly-guarded secret.

Along with her admission, the high school senior from Woodstock, New York received an invitation to join the Black Student Alliance. She had chosen not to check an ethnicity box on her application, but she did include a photo.

The young woman’s undaunted deconstruction of an explosive family secret inspired the autobiographical documentary Little White Lie. The film is the result of Schwartz revisiting her life with an ever-present camera to record startlingly frank encounters in a home, larger family and community where once there had only been denial. The film chronicles the process of dismantling a false identity and reconstructing a new one.

Reached by phone in a recent interview, Schwartz explains why her story speaks to so many. “My case is particular in its details. But lots of people feel a gap between the person they are raised to believe they are and who they sense they might be.”

Schwartz, who started making films in law school as a means of exploring social marginalization, is herself the little white lie in her family’s life. Her coming of age, chronicled in the eight years it took to make the film, required balancing her mixed lineage, that is, her Jewish upbringing and her gradual introduction to the identity of black woman in a white world. Viewers are in awe of the honesty, determination and clarity with which Schwartz navigates what she calls “my dual identities.” 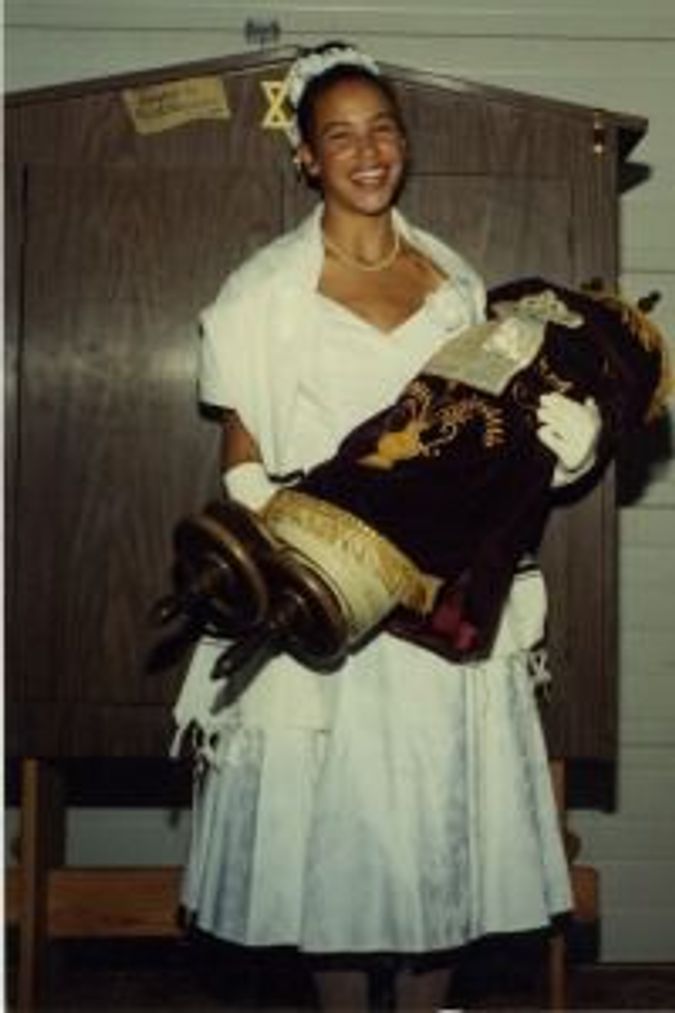 Lacey at her Bat Mitzvah Image by Peggy Schwartz

In the film, Schwartz’ conversations with her withdrawn, non-biological father are a model of presence and compassion. She does not disguise the internal barriers to closeness that she experiences with her biological father and his extended family. We see Schwartz grow into her mother’s steady guide in exploring the older woman’s flawed life strategies. Her mom’s gradual willingness to face the truth with all its repercussions is a testimony to her daughter’s sensitivity, as well as to communication as a transformational tool regardless of the starting point.

The film is inevitably about a whole community’s willingness to buy into a shared racial illusion. The footage shows photos of young Lacey in all-white, Jewish summer camps, celebrating her Bat Mitzvah and living every happy day of her middle class life in the 80’s and 90’s without any questions being asked, despite her appearance. After her revelations, she asks family members and friends how they ignored a truth that was right there before their eyes. Self-deception is treated with the sympathy Lacey manages to preserve for all those she unswervingly loves.   An attorney, social advocate, and 37-year old mother of infant twins, Schwartz is thrilled with the enthusiastic reception of Little White Lie. The film affords her an opening, both with her live audiences and via social media, to ask others, “What is the little white lie in your life?”

She explains, “It doesn’t have to refer to deceit. It’s asking what difficult truth has never been mentioned and how does this omission hold you back and affect who you are.” She sees herself as offering an example of “how to have the difficult conversation, how to learn from it and move on.”  It’s a conversation that’s as edgy as it is potentially transformative.   In her case, the conversation is inevitably about race, “a topic about which there is always great reluctance.” Schwartz frankly admits that the cultural values and collective assumptions of the Jewish community helped to hold together the fiction about her until she went off to college. “It is not a conspiracy, but rather a lack of consciousness. Jews are a cohesive, insular community so they focus on what they have in common, what binds them together as an exclusive group. Differences that divide are conveniently overlooked. The lie could have been sustained anywhere, but Jews do have a stake in common denominators.”   She strongly believes that “the power of honest conversations begins with individuals. Then it reverberates in larger circles, to whole families, to communities, to whole societies.”   Schwartz is the National Outreach Director and New York Regional Director of Bechol Lashon, an organization that looks at the unmet challenge of racial, ethnic and cultural inclusivity and diversity in the Jewish community. True to Schwartz’s core mission, she is interested “in forming partnerships with other organizations that are looking for tools to have a deeper conversation.”   The recent attention to Jewish activism around policing and racial inequality makes this “a perfect moment” for concerns about Black-Jewish relations. But Schwartz is careful to say, “There have been a lot of perfect moments,” and, “this is not just a question of hitting the streets together – though of course, that too is a good thing.” Her emphasis is on probing the psychological dynamics. “Sure, now is the time, but looking within is a long-term process.”   The success of Little White Lie provokes the deeper conversation. Lacey Schwartz will know how to sustain it with courage and insight that can open up whole new ways of seeing our world.

Susan Reimer-Torn is the author of the recently published memoir, Maybe Not Such a Good Girl: Reflections on Rupture and Return