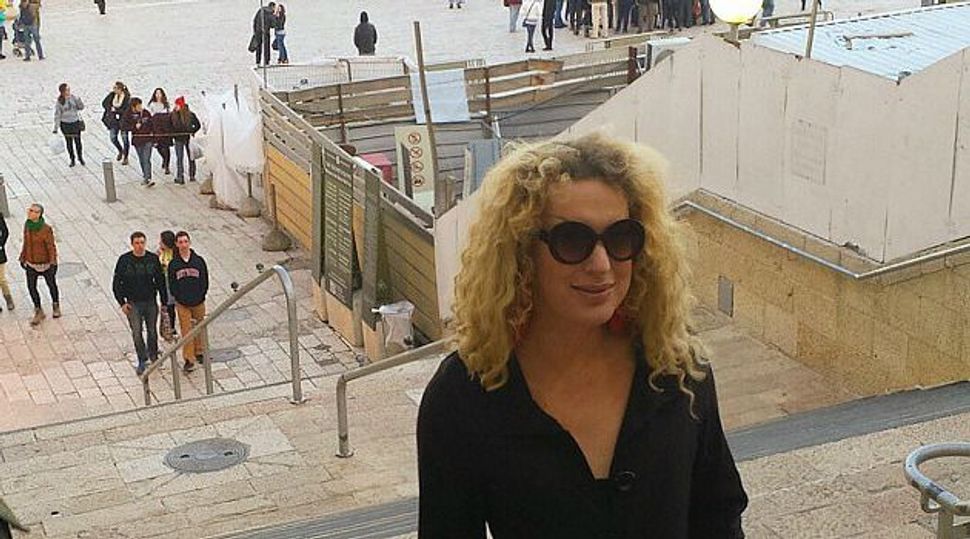 Kay Long poses on the Kotel plaza after being refused access to both women’s and men’s sections.

(JTA) — A transgender woman was denied access to both the women’s and men’s sections of the Western Wall.

Kay Long, who designs wedding dresses, evening gowns and costumes, on Monday visited the Western Wall with a friend visiting from Madrid.

When she approached the women’s section she was turned away by an Orthodox woman patrolling the site who said she is not a woman. She was not allowed into the men’s section because she does not look like a man and in any case would not wear a yarmulke.

“From an early age we are taught that if we place a note at the Kotel our prayers might be answered,” she wrote Monday using the heading “Dilemma” on her Facebook page, under a photo of her outside the Western Wall plaza with the Kotel in the background. “All that’s left now is to take a picture and say a prayer from afar with the hope that it will be answered. Because God is everywhere and loves us all.”

After hundreds of comments and likes, Long on Tuesday morning posted a clarification, saying that she had no intention of praying at the Western Wall during her visit, and believes that it is more important for the Orthodox worshippers to be there than for her to make a scene.

“Inside, I believe that God is everywhere,” she wrote, adding that she believes in a live and let live motto.

“The point is, I decided to respect humans wherever they choose to be, and they didn’t respect me,” she wrote.

“Your prayers will be answered because you are a pure person and more wise than all of those who prevent you from coming close to the Kotel,” one of her Facebook friends responded, who also decried “gross discrimination,” against transgender people in Israel.