Don’t Write Off France Just Yet 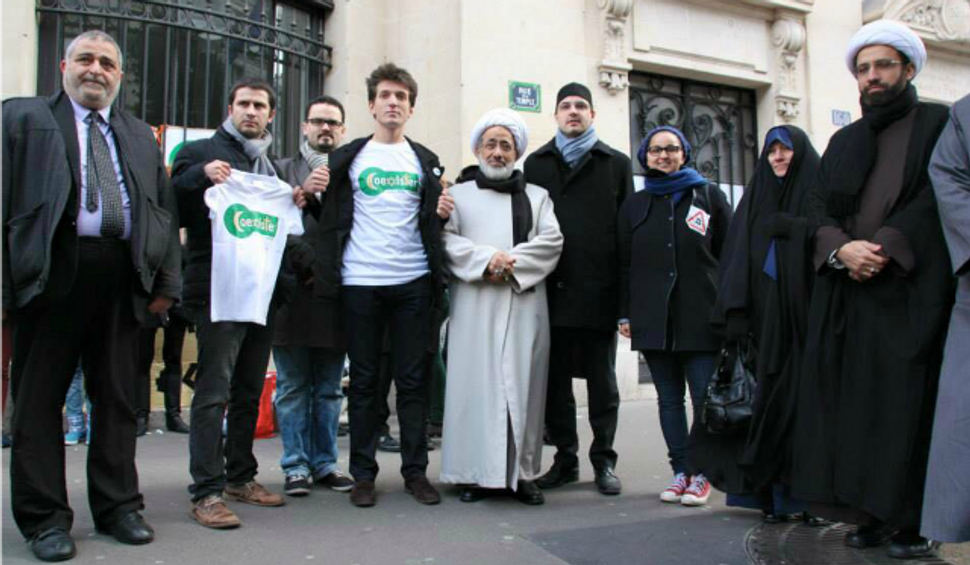 Jews and Muslims from the Foundation for Ethnic Understanding march in Paris. Photo courtesy of Samia Hathroubi

As an American and as a Jewish woman who has lived in France and spent time with its wonderful Jewish community, the events of last week hit particularly close to home. As I scoured my Facebook page Wednesday and Thursday, looking for updates from friends and colleagues, my blood ran cold as one horrific report followed another. I cannot not help but remember being in Lyon, France in the wake of the September 11th attacks and the outpouring of support I received from strangers when I mentioned that I was from United States. ‘We are all Americans,” some French firefighters told me when I stopped one day to purchase a hat with twinned French and American flags that they were selling as a show of support to their American counterparts.

Today should be our turn to return the support. Yet such a simple statement of solidarity is not easily found among many in the Jewish community in the United States. When news broke about the hostages being held in the kosher supermarket in Paris, I began to hear rumblings on social media about rampant French anti-Semitism and anti-Semitic acts perpetrated by French Muslims. At one point on Friday, I overheard a conversation between two women at a synagogue in Washington, DC, in which Holocaust comparisons were frequently invoked. In yet another response to the attacks, an American Rabbi likened Jews to the canary in the proverbial coal mine.

There is no denying that anti-Semitism continues to be a serious problem in France. The heightened rhetoric and outbreaks of aggression against Jews and Jewish property this past summer is just one example. Yet Jews are not the only signifier of a society in distress. France has long struggled with integration of its minority communities- Jewish and Muslim alike. The French government’s inability to handle tensions over international politics like the Middle East conflict and the disintegration of social cohesion at home has only furthered simmering resentments.

As American Jews, it is tempting to see the attacks in Paris as yet another example of Jews suffering at the hands of Muslim extremists but let us not turn this into an orgy of pitting Muslim against Jew. These attacks were about terrorizing all who value the freedoms of speech and of religious practice. Jewish shoppers, Muslim policemen, atheist journalists—all were killed in gruesome fashion. If we are angry about violence against French Jews, we should also be angry about violence against French Muslims. If we are furious about the murder of French cartoonists, we should be furious at anyone dares to strip others of their core freedom.

This past Sunday, over one million people — Muslim, Jewish, Christian — took to the streets of Paris together in a rare moment of solidarity and mutual support for their country and its ideals. Although this moment may be ephemeral, let us not use this tragedy to undercut the affirmation of our common humanity. After all, when was the last time we saw a French Muslim holding a Palestinian flag and French Jew holding an Israeli flag embrace in the middle of thousands of people anywhere in the world, let alone in France?

In the next few weeks, those of us in the United States may very well return to our cynicism about French intentions.Yet we have had a glimpse of another alternative: a France that embraces all of its citizens equally and with pride. Let us then loudly reject the status quo. Instead, let’s seize this outpouring of goodwill and unity and throw our support behind the vast majority of French Jews and Muslims who declare that they will not be enemies. Let us lift up all those who, in the face of this trauma, still marched through the streets of Paris wearing kippas and hijabs carrying signs that say ‘Coexist.’ Let us show our solidarity with a France who, for at least one day, said with one voice, #JeSuisJuif, #JeSuisAhmed, #NousSommesEnsemble. #IamJewish. #IamAhmed. #Wearetogether.

Don’t Write Off France Just Yet