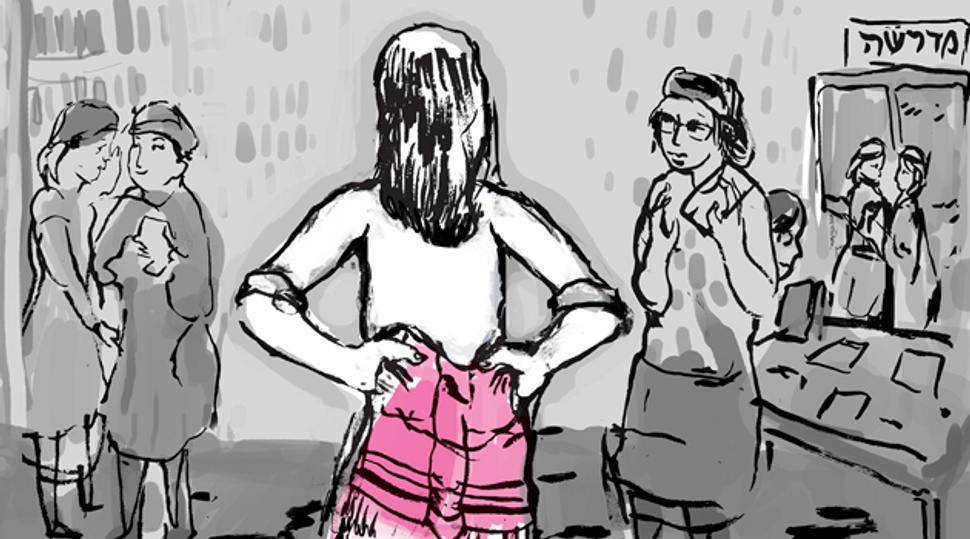 Growing up in West Hartford, Connecticut, at every Shabbat meal in my home, my father would make kiddush and my mother would make hamotzi, the blessing on the challah. For me, this is part of the fabric of what Shabbat feels like, and it has always felt strange for me to be a guest in homes where the male head of house did both rituals. “Ima makes hamotzi” was a fact, entirely unrelated to personal or familial feminism. This year, that assumption changed.

I’m currently spending a year studying at Ein HaNatziv, a midrasha, or Israeli religious seminary for post-high school women, that is known for being feminist and progressive. Ein Hanatziv is among very few Israeli midrashot which teach Talmud to their students, and which have an infrastructure to assist girls in the process of entering the army (It’s not common for religious Israeli girls to enlist; more often, they perform National Service). Teachers at the midrasha include many learned female role models, as well as men who support expanded ritual opportunity for women; many years, students organize women’s Torah readings (though without constituting themselves as a minyan) with the faculty’s encouragement and support

While many of the American students who attend Ein HaNatziv are self-identified feminists, drawn to the midrasha because of its liberal bent, the Israeli students, however, have a more complex relationship with feminism.

The second Shabbat there, we split into groups and ate dinner with our teachers and their families. It was a really pleasant night — getting to know each other, and nothing felt out of the ordinary about the meal other than comically flimsy plastic cutlery. I was therefore thrown off balance when after the meal, a fellow student who was Israeli expressed surprise that our teacher, and not her husband, had made hamotzi. “Yeah, there are a lot of feminists here,” responded one of the other young Israeli women. Her tone wasn’t judgmental or negative, but it expressed both a marked distance from feminism and a categorization as ‘feminist’ something I viewed as a regular Shabbat occurence.

It was then that I began to realize that, be it because of my family or the general milieu of American Modern Orthodoxy, I had different understandings of what was religiously radical than did my Israeli peers. As a girl who wears tzitzit and lays tefillin, I expected curiosity about and opposition to those practices, but a woman making hamotzi? That was just how Shabbat meals worked!

About a month into my time in Israel, right before Rosh Hashana, I was approached by an Israeli girl at the midrasha who started talking to me about my tzitzit. I explained to her that I don’t consider myself to be exempt from the mitzvah, as per classical Jewish law. After I finished attempting to explain this in still-shaky Hebrew, she looked at me and said “But aren’t you scared you won’t find a husband because of your tzitzit?” I was caught-off-guard by the question; over the past year of wearing tzitzit visibly in American Jewish spaces, I’d encountered my fair share of both antagonism and concern for my wellbeing, but nobody had ever expressed concerns about my shidduch prospects. In the circles of Israeli religious girls, however, even those on the more liberal side of the Religious Zionist world, marriage was both a relevant concern and an appropriate topic for conversation.

I have heard it said that Israel is about twenty years behind America vis-à-vis religious feminism, and I am inclined to believe it. Issues like women performing table ritual and studying Talmud which are now commonplace and do not need defending in many spheres of Modern Orthodoxy are still highly controversial in the Religious Zionist world. While Modern Orthodoxy and Religious Zionism are often thought to be parallel movements, the “Modern” in Orthodoxy, despite its failure to manifest in many ways within that movement, is significant. Religious Zionism, as a movement, is focused more on nationalism than it is on modernity, and therefore religious shifts towards increased gender justice are less of a focus. While I no longer identify as Modern Orthodox, choosing instead to affiliate with egalitarian communities, I’m grateful for having grown up as part of the American Modern Orthodox movement. Having the deliberate filter of modernity on my halachic practice has been tremendously significant.

I am now almost halfway through my year at Ein HaNatziv and I still regularly have frustrating experiences. I’m learning that my background is not the norm; not just those things that feel explicitly feminist to me, but also many of the religious practices and opportunities I take for granted. Encountering these challenges is painful and disappointing; gender justice in Judaism matters deeply to me, and to learn that in Israel even less change has been made than in the community I grew up in is difficult. I’m still figuring out how to turn this element of my year in Israel into a positive growing experience, but for now I’ve learned to enter into conversations about gender with fewer expectations.