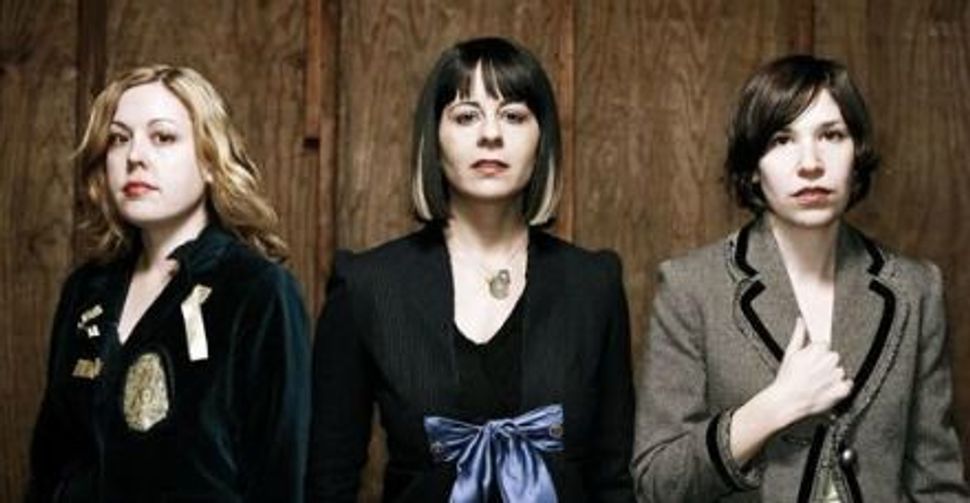 As is the cases with any band reunion of this caliber, the question of Sleater-Kinney’s permanence is in the air: are you back, or are you back? Lead singer Corin Tucker, guitarist Carrie Brownstein and drummer Janet Weiss let the medium be the message. If No Cities to Love is any indication they’re not back just to tour, and they’re not back to save the world. They’re here to save you, specifically from your loneliness. They’ve produced an album too ambitious, too embedded in the spirit of community and too full of hope for the future to not stick around.

To reach those heights, they’ve got to start low. “Price Tag”, the album’s opening song, asks the listener to imagine a world without them. It’s bleak. Like that part in The Incredibles where heroes have been made illegal and are forced to work like the rest of us, Tucker details a life of drudgery in harsh sarcasm: “The bells go off, the buzzer coughs, the traffic starts to buzz. The girls are stiff, the fabrics itch, the fit’s a little rough”. Her voice rises sharply, kicking into the upper echelon of truth that became her trademark as the band dominated the alternative scene in early 2000’s: “But I suck it in!” In summing up the hellscape that has been the last ten years, Sleater-Kinney treats the listener to one final horror: “It’s 9 AM, we must clock in, the system waits for us.” Weiss’ drums are relentless, Brownstein’s guitar flails, Tucker’s voice is tense, the life-or-death stakes are clear. It’d be too obvious to say this is just about the recession: the song is reminiscent of The Corin Tucker Band’s 2012 single, “Groundhog Day”, where Tucker straight-up asked “Is our generation living in a deep rut?” On No Cities, she finds her answer and is determined to change it: “We never checked, we never really checked the price tag! When the cost comes in it’s gonna be high!”

Sleater-Kinney grew out of the political riot grrrl scene of the 1990s, although the band reached its highest heights after the movement had fallen victim to infighting, fatigue, and trying to establish a nationwide DIY movement before the Internet. “Girls to the Front,” the definitive history of the movement by Sara Marcus, mentions the band exactly once, and then in the future tense. That future turned out to be a run of seven hard-charging albums without a misstep, ranging from the complex “The Hot Rock” to the smashing waves of guitar in the first act finale “The Woods.” Along the way, Brownstein and Weiss moved the forefront of the so-called Cool Jew movement, a period in the mid-2000s that featured Heeb Magazine and JDub Records. Although never directly affiliated with Cool Jew, Sleater-Kinney offered up an image of Jewish women who were forceful in their demands without apology. It’s easy to see their influence in bands like the Hasidic Bulletproof Stockings, which brought to New York a concept which the original Riot Grrls had considered but later deemed too radical: A show where no men were allowed.

Riot grrl was, among many other things, a series of highly specific confrontational actions placing macho asshole punk bros and Clarence Thomas in the same corner. Some of Sleater-Kinney’s past albums have followed this path, some have not. No Cities to Love is not confrontational, but it does have for a message. A cynic might say it’s a political album in the same way Brownstein’s IFC show Portlandia is social satire: using kid gloves, it takes broad swipes at strawmen so general that no one could possibly disagree. An optimist would say that it’s a roadmap to a secret history, a tradition of subversion that’s driven rebels from Joe Hill to Malala Yousafzai. And when the music sounds this good, it’s a helluva lot more fun looking on the bright side.

Take the album’s title track, “No Cities to Love.” It posits an idea so Marxist that Hill and Yousafzai would surely approve: that the world’s border are a false pretense meant to divide, that the individuals within those borders are far more important. “There no cities, no cities to love,” Tucker and Brownstein go, bringing back their remarkable chemistry as singing partners. “It’s not the cities, it’s the weather we love.” Sonically, the album shies away from the Nuggets–influence that shined through on their last album, the masterpiece The Woods, as well as the lesser Wild Flag spin-off. The sound is as influenced by post-punkers like Shellac as it is by Bikini Kill. Brownstein’s guitar gives room to breathe while hopping around like a faulty electrical wire, the drums chug, as opposed to the pounding that takes up most of the album (if there’s any justice in the world, expect ‘Janet Weiss is a wizard’ graffiti at a public transit station near you). The song is built around rising to the chorus, which changes over time: “It’s not the weather, it’s the nothing we love” goes the correction the second time around. An irresistibly catchy bite starts to develops around the word ‘city’, shaking the very concept of a metropolis to its core. “It’s not the weather, it’s the people we love.”

The value of these people in these cities play out over and over again throughout the album: “we invent our own obscurity” on “A New Wave,” “We win, we lose, only together do we make the rules!” on “Surface Envy”, “We speak in circles, dance in code” on “Bury Our Friends”. The collective, and the value of collective sub-culture, is of paramount interest to Sleater-Kinney, these are idea that comes through on their lyrics as well as No Cities’ sound. Not one of the album’s thirty-three minutes is wasted or spent on knotty jams or heartbreak, everyone is keenly aware of the other two members at all times and the joy vibrating from them. The warm fuzz of “No Anthems” guitars turns into flying fists, the long chords of “Gimme Love” contrast perfectly with the attack-and-release drums. Perhaps one of the reason people have been getting so psyched for this comeback in an era where rock is no longer the norm for rebellion is that Sleater-Kinney makes the joys of being in a band so easy to see.

Like any great album, it would be a worthless enterprise to break No Cities down into lists or clickbait. It’s a cohesive piece driven by emotion, the urgent joy of revival. In the midst of the newfound hope/hype, many have been referring to the time Greil Marcus called Sleater-Kinney “America’s best rock band” in that most mainstream of publications, Time. It’s a title they actively reject on No Cities: “It seems to me the only thing that comes from fame is mediocrity!” goes Tucker on “Hey Darling”, and you can practically see the Alt Nation flag waving behind her as balloons drop from the ceiling. “Don’t you steal the thing I love!” Some might see this as call never to sell out. No Cities to Love won’t get caught up in semantics, it’s too busy partying. It’s a shredder and a headbanger and a dancer and above all it’s a new Sleater-Kinney album that sounds like a new Sleater-Kinney album. A decade removed, theirs is a sound of timeless urgency.

David Grossman is a writer based out of Brooklyn, NY. Follow @davidgross_man