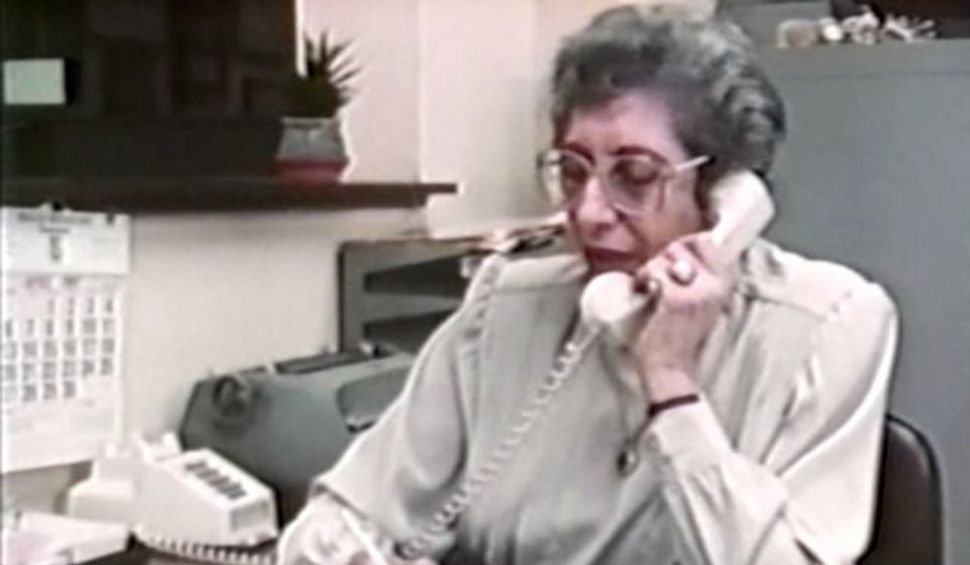 Before newspapers outsourced their circulation needs to databases and fulfillment agencies, before readers could blog their immediate dissatisfaction — people like Fani Jacobson at the Forverts, ext. 622, handled the incoming telephone calls demanding to know (in the more polite iteration of the query) precisely why they hadn’t received their paper? To handle the callers — and not lose subscribers — you’d have to be possessed of zip code trivia and have the grid of many a major metropolitan city imprinted on your psyche. Most of all, you’d have to be more than a bit in love with your readership. And as a multitasking circulation secretarial administrator, she did it all without a fancy official title.

© 1989 The Forward: From Immigrants to Americans (dir: Marlene Booth and Linda Matchan)

And it was Forverts West Coast distribution plans that determined Fani’s life-long employment with the Forverts, when in 1950 labor writer Harry ‘Herts’ Lang was granted permission to write and edit a Los Angeles edition of the paper. A widower, Lang needed help getting situated and his daughter Naomi, at the time a Forverts administrative assistant agreed to help him with the move — and gave her good friend Fani word of the job vacancy. Fani shortly thereafter left her position as a union communications and public affairs specialist with the New York Labor Party, and leaped at the chance to work in her beloved Yiddish.

Jacobson was a native of Flatbush and daughter of immigrants of Vitebsk, Belarus (birthplace of painter Marc Chagall). Following her parents who participated in the City Committee and Camp Committees, Fani maintained a lifelong commitment to public service through the social activist Yiddishist group the Workmen’s Circle/Arbeter Ring, becoming their first woman Vice-President. With her passing last Wednesday January 21st at the age of 97, an irreplaceable piece of historical New York City is gone. Jacobson was likely the last Forverts employee to have worked with Founding Editor Ab Cahan. She possessed what in Yiddish is called an “eyzerne zikorn,” a steel trap of a memory, and was frequently called upon to identify individuals in photographs in our archive. She was among the last Forverts employee to respectfully address fellow workers as fraynd [friend]. A proud worker among workers, Fani considered retirement a mere shift in job sites — as she then lent the breadth of her experience and strength of memory to the task of cataloging the Workmen’s Circle archives at YIVO.

In Talmudic times, before email, tumblr, instagram or twitter, the job of memorizing scholarly argumentation and bringing it to the next house of study was given to those considered ‘sal mehalekh’—a literal walking basket of information. Their talent at memorization could be depended on to transmit this specialized knowledge to others. They were honorable and undistracted.

A single, fiercely independent woman, Fani Jacobson’s living will demands as humble and practical an approach to dying as there was for her life. She was buried amongst eternal colleagues and loved ones in the Workmen’s Circle cemetery—without fanfare. Her celluloid presence will persist in Marlene Booth and Linda Matchan’s documentary “The Forward: From Immigrants to Americans,” a still image of which can be seen above. And she’ll reside in print as a character in Boris Sandler’s Yiddish novel based on his early days at the Forverts. The city streets will be devoid of her tall shadow but the halls of the Forverts and YIVO and so many other sites of her generous labors will long be enriched by her contributions.