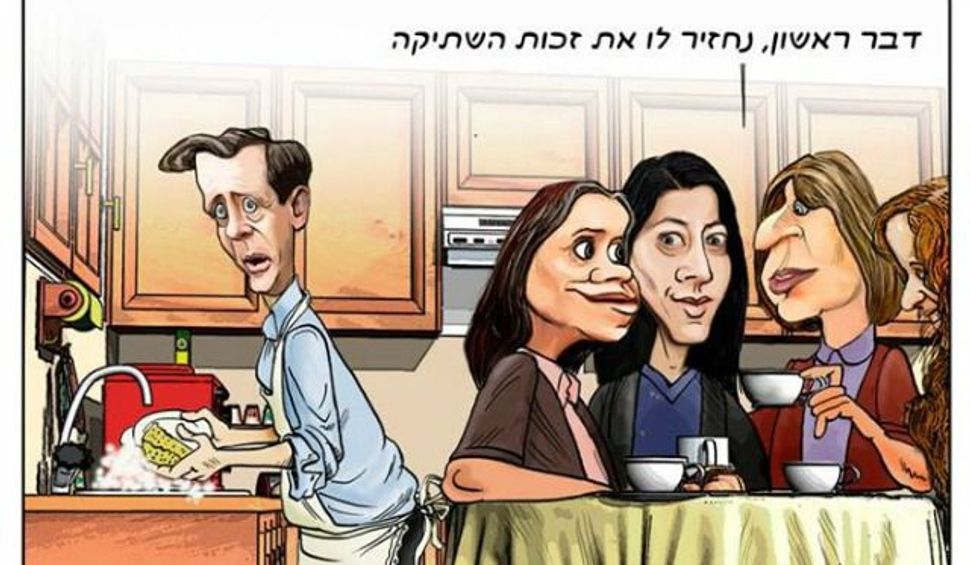 In some ways the past few years have been very good to women in Israeli politics. A fact that is reflected in the current election campaign. Many of the parties have women in the top ten spaces on their lists for Knesset. Women are both major players in the political arena as well as an important target for political advertising (see for instance, the Jewish Home’s and Yesh Atid’s ads aimed at women). Even Ultra-Orthodox women, who are perceived to be traditionalists and submissive, have belied that perception, taking their political futures into their own hands by founding their own party, B’Zchutan. It’s a whole new world and it has been for a while.

The reaction of the Israeli media to this new reality however, is not quite so new. It reeks of misogyny at its worst and confusion at its best. A great case study for this is the media reaction to former Justice Minister and co-chair of the Zionist Camp, Tzipi Livni. Last week, the right-wing commentator for Maariv, Nadav Haetzni, wrote, “… is Tzipi Livni, who left her party, the Likud, in 2005 with Ariel Sharon, stealing a third of the seats belonging to Likud voters.” Note, that in his version of events it is Tzipi Livni who is leading Ariel Sharon away from his rightful place with the Likud. Livni is a familiar target in Haetzni’s columns. Though there are other figures that he damns with deception, it is Livni who comes up again and again. More than any man, she is the true threat to the State of Israel. He feels betrayed by her. Never mind that many a man has changed political parties and allegiances. And never mind that Livni has often made the jump along with men. How dare this woman betray her Revisitionist heritage? His hatred of her truly borders on the irrational.

Haetzni is a bit extreme, but even the bastion of the left-wing, Haaretz, doesn’t quite know what to do with Livni. In December, Haaretz ran a column in their arts section analyzing Livni’s style. It’s well known that Livni is not considered traditionally pretty and that she favors more “masculine” styles of dress. However, in the context of her partnership with Yitzhak Herzog, her perceived manliness takes on another dimension. The sub-heading of the Haaretz column reads: “She mostly wears pantsuits and maneuvers within the representation of women in positions of power as solid, he radiates quiet and mannered elegance, that his enemies present as “feminine”…”. Her power is a threat to Herzog’s masculinity. Why does he need enemies to present him as feminine, if he has the Haaretz headline to do it for him? Livni is “solid”, she “maneuvers” her way through things. Herzog is quiet and mannered and elegant. The column both manages to reduce Livni to a fashion curiosity and, despite being written by a woman, express the discomfort that is felt in the face of a powerful woman — especially one who does not conform to traditional “feminine” beauty standards.

The treatment of other Israeli female public figures is in a similar vein. Maariv Columnist Ben Caspit has portrayed Sara Netanyahu as a Lady Macbeth. A series of political cartoons reacting to the female-heavy Zionist Camp list are astonishingly sexist. In one, the top four women on the list Tzipi Livni, Stav Shaffir, Merav Michaeli and Shelly Yachimovich are seen sitting around a kitchen table, drinking coffee, while Herzog is in the background washing dishes in a frilly apron. “First things first,” Livni says in the cartoon, “we’ll give him the right to remain silent” (A reference to an old scandal involving Herzog’s invocation of the right to remain silent during a police investigation, but also a portrayal of Herzog as henpecked). In another, the four women are seen as Herzog’s trophies, driving around with him in a red convertible, waving a “Boogie” flag, while poor Netanyahu is sitting on a bench with only Miri Regev to keep him company. (A good overview of the cartoons can be found here- http://tech.walla.co.il/item/2820145.) And it’s not as if the “traditionally” beautiful women have it any easier. The fourth Google auto-fill that comes up when Googling Ayelet Shaked (in Hebrew) is “Ayelet Shaked pretty”. The first four articles that come up as a result of that search have some variation of “not just a pretty face” in their title.

The media is behind the times. Yes, there is a long ways to go and a lot to be done regarding sexism in Israeli politics and society, but women wield and enormous amount of power. From the Jewish Home, to Meretz, to the Likud, to the Labor Party; from Miri Regev to Stav Shafir, from Ayelet Shaked to Tzipi Livni, from Zahava Galon to Ruth Colian, women have had been important players in the political arena and have played a fundamental role in shaping political and public discourse on vital issues for a while now. The fact of their womanhood makes them neither the source of all evil, or more than just a pretty face. Their power does not emasculate, nor is it a prize to be won by men. Their power is their own and they will use it as they see fit, just as men do. So let’s stop talking and let the women get to work.