Is ‘Gett’ a Realistic Portrayal of Israeli Divorce? 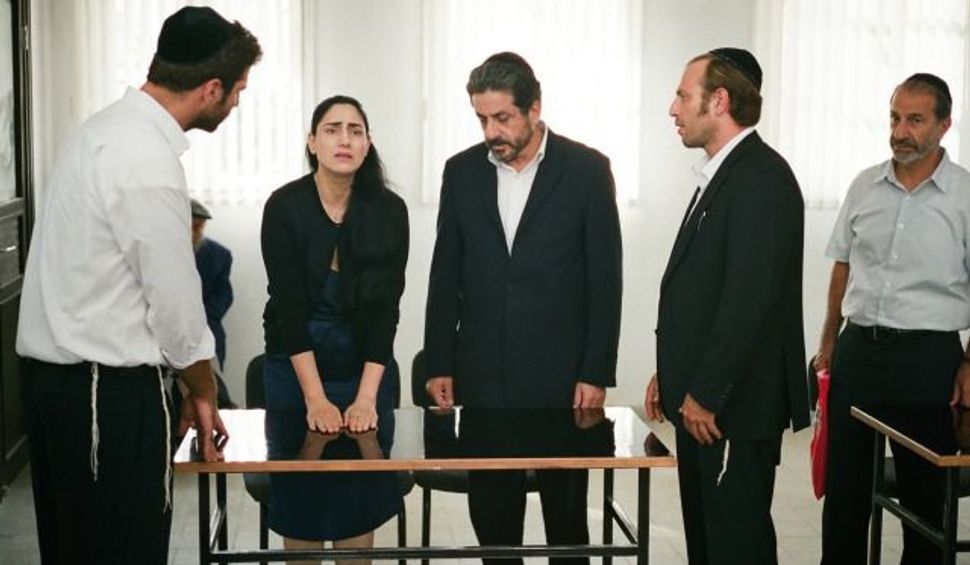 At first glance the subtitle of siblings Shlomi and Ronit Elkabetz’s new film “Gett: The Trial of Viviane Amsalem” seems odd. The film, after all, is about the divorce proceedings for Viviane (Ronit Elkabetz) and her husband (Simon Abkarian). But by the end of the film you see how apt the subtitle is — like many women seeking divorces in Israel Viviane finds herself, her conduct, her motives, her obligations as a wife, her faithfulness, her very essence as a woman on trial.

As a rabbinical court advocate many people have asked if what happens on screen, proceedings of the Israeli Rabbinical Courts are usually closed to the public, is accurate. The answer is yes.

I have witnessed all of what took place in the film Gett. What is unlikely is that all of the incidents would be concentrated in one specific woman’s case. Nevertheless, it is probable that one or more of the troublesome situations will arise in any given woman’s plea for freedom. Note—any woman, who unilaterally sues for a Jewish divorce, having previously married in an Orthodox ceremony whether in Israel or the Diaspora, may find herself a victim of get-refusal.

Jewish divorce law differs from a civil divorce in two fundamental ways. Firstly, the judge does not have the power to issue a divorce decree — only the spouses, with both agreeing to do so, can give and accept the writ of divorce, the get. Secondly, in order for a Rabbinic Court to be convinced to arrange the divorce, grounds have to be proven. In other words, no-fault divorce does not exist in Jewish law.

These two basic laws provide the foundation for every husband who married in an Orthodox ceremony to wield the ultimate power over his wife and simultaneously over the Rabbinic Court — to simply refuse to give his wife a get. For “irreconcilable differences” or “I find him repulsive”, which are the grounds most-oft cited by women seeking a divorce today, as was demonstrated by Viviane Amsalem, are not on the list of qualifying grounds for coercing the husband to give the get. The halakhic category for this type of suit, where physical violence or other clear abuse cannot be proven, is “mais alai” – he is repugnant to me. For many Rabbinical courts the claim of “mais alai” does not provide a basis for a ruling of obligating the husband to issue the get, let alone coercion. This untenable situation brings out the best in Viviane Amsalem, but the worst in the judges who partially held her fate in their hands. The individual who actually controlled her fate in an everlasting manner was her husband. (Spoiler alert: The depth of this last statement will become apparent at the conclusion of the film.)

The film “Gett: The Trial of Viviane Amsalem,” has proven to be so powerful that it has accomplished the inconceivable: The Sephardic Chief Rabbi and President of the High Rabbinic Court in Jerusalem, Rabbi Yitzchak Yosef, has agreed to a private screening for all of the rabbis serving as judges in the Israel State Rabbinical Court. Indeed, when they view the film, the rabbinic judges will not only get to see themselves and their actions through the eyes of the common citizen, they will have the opportunity to actually feel, as much as is possible through the medium of film generated empathy, the existential angst of a woman who is as agunah — a victim of get-refusal. For all rabbinic judges mouth the platitude (meaning it) that they are doing all that they can to help the woman and feel her suffering. However, unless he has a daughter who is an agunah, a rabbinic judge does not really see the law or his own actions through a woman’s eyes. He certainly cannot feel the gripping despair through her heart. But by means of viewing this movie he may be able to get more than a taste of both. Whether this singular experience will influence the rulings and behavior of the rabbinic judges remains to be seen.

Moreover, ordinarily a film review is not considered a platform for highlighting solutions to grave problems, solutions that were not brought in the context of the film. Nonetheless, it would be irresponsible not to emphasize that there is a preventative solution which is both simple and nowadays a necessity to implement – signing a halakhic prenuptial agreement for the prevention of get-refusal. Viviane’s story should convince you of its absolute necessity.

Dr. Rachel Levmore, Rabbinical Court Advocate, is the Director of the Agunot and Get-Refusal Prevention Project, of the International Young Israel Movement in Israel and the Jewish Agency. Rachel is one of a team that developed a Prenuptial Agreement for the Prevention of Get-Refusal─ “The Agreement for Mutual Respect” (http://www.iyim.org.il/prenup/). She is a sitting member of the State of Israel Commission for the Appointment of Rabbinical Court Judges.

Is ‘Gett’ a Realistic Portrayal of Israeli Divorce?