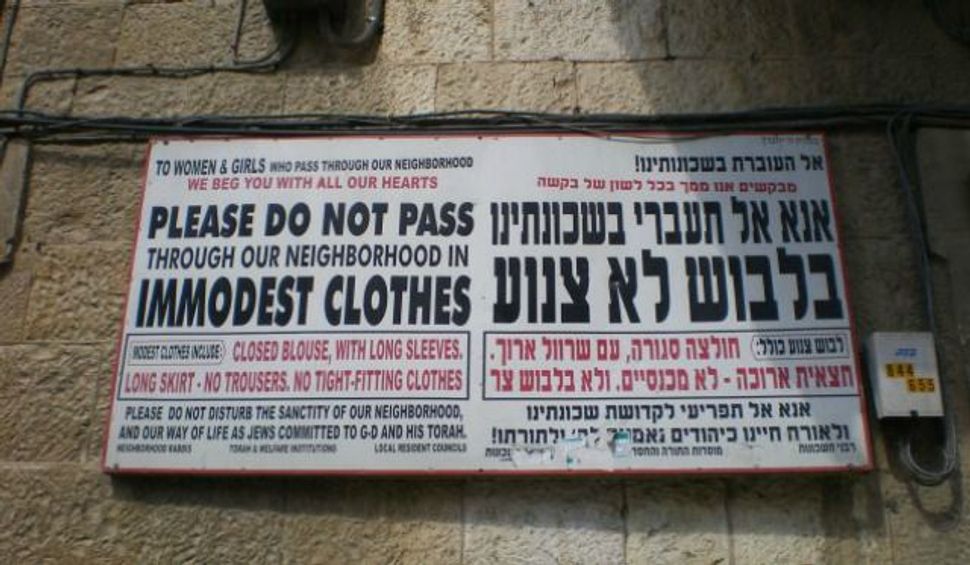 A sign in the entrance to Mea Shearim neighborhood in Jerusalem. Photo by Wikimedia Commons / Lisa Mathon

Modesty signs in the ultra-Orthodox neighborhoods of Jerusalem are a common sight.

The forbidding black headlines generally read, “Please do not pass through our neighborhood in immodest clothes” – with a detailed description of the dress code to be obeyed by women lest they risk “offending” or “violating the sanctity” of their surroundings.

Most tourists come back with snapshots of such signs. But what may be a quaint custom to a visitor is, at best, an inconvenience and, at worst, a threat of violence to the women who live their lives in Israel’s capital.

Jerusalem’s ultra-Orthodox neighborhoods, after all, are not remote villages, but central parts of a busy metropolis. Many of these neighborhoods contain – or are adjacent to – public health clinics and government offices that women from across Jerusalem must frequent, and shouldn’t have to change their clothing in order to do so, for fear of being verbally or even physically harassed as a result.

Laura Wharton, a member of Jerusalem City Council, has complained to the municipality and mayor Nir Barkat about the signs in the past on the grounds that they are illegal, with no success. “I didn’t get a serious answer. I was brushed off.”

But following the legal victory by a group of women in Beit Shemesh, who won a landmark ruling on January 25 in which the court awarded them $15,000 in damages from their municipality for the mental and physical anguish they had suffered as a result of the signs, Wharton has decided to lead a renewed effort in Jerusalem to act against the modesty signs there.

“I was very happy that the women in Beit Shemesh won, and now that there is a precedent, I have sent letters to the director general of the Jerusalem municipality and the deputy mayor who is responsible for buildings and signs,” says Wharton, who has represented the Meretz party in Jerusalem for five years. Born in New Jersey, the Harvard-educated Wharton teaches political science at Hebrew University.

In the Beit Shemesh decision, Judge David Gidoni stated that the city’s failure to remove the signs was a violation of women’s civil rights, calling them “hurtful, degrading and discriminatory,” causing “mental distress,” and stating that they “delivered a mortal blow to the rights of women in the city.”

In the letter that Wharton sent to Jerusalem officials, she noted the Beit Shemesh decision, which clarified that “signs which dictate a dress code for women are illegal and the city is responsible for taking them down.” She included four photographs and addresses of such signs in Jerusalem, “though I know of at least 10 more.”

Wharton said she is giving the municipality a month to respond to her request, and if it doesn’t take action against the signs, she will follow the lead of the women in Beit Shemesh and turn to the courts.

She said that many women in Jerusalem who are not ultra-Orthodox fear visiting parts of the city neighborhoods for fear of attack. No matter how traditionally they dress, she said, all outsiders are potential targets.

A modesty sign “not only promotes the violence, it legitimizes it – it says, essentially, that women aren’t allowed here if they don’t have a skirt down to their ankles and implies that they can be attacked if they don’t, which is a vigilante act. Citizens of this country need to know there are laws and they should be enforced. The signs are a flagrant violation of the law – they turn any woman who doesn’t fit certain criteria into a sitting duck.

“Taking down these signs would send a very strong message to the people who put them up that the law must be enforced.”

Meanwhile, in Beit Shemesh, the group of women who won their lawsuit and were awarded damages, say they are not satisfied with the financial compensation, and that they are continuing their legal push to actually force the physical removal of modesty signs. Despite the ruling awarding them compensation, the signs remain in place.

“Although the ultra-Orthodox like to say it is ‘their neighborhood,’ the law doesn’t work that way,” Erez-Likhovski said.

After the ruling in January, the Beit Shemesh municipality issued a statement stating the court had “unfortunately failed to understand the complex reality of Beit Shemesh that we are dealing with, and didn’t accept the municipality’s claim that it was acting out of concern for keeping the peace and damaging the delicate balance of diverse populations living in the city.” It noted that “in Jerusalem and other places, similar signs exist and nobody has sued these cities.”

The municipality promised it will “work together with police” to enforce the law “when things calm down” – though it did not specify exactly when that would take place.