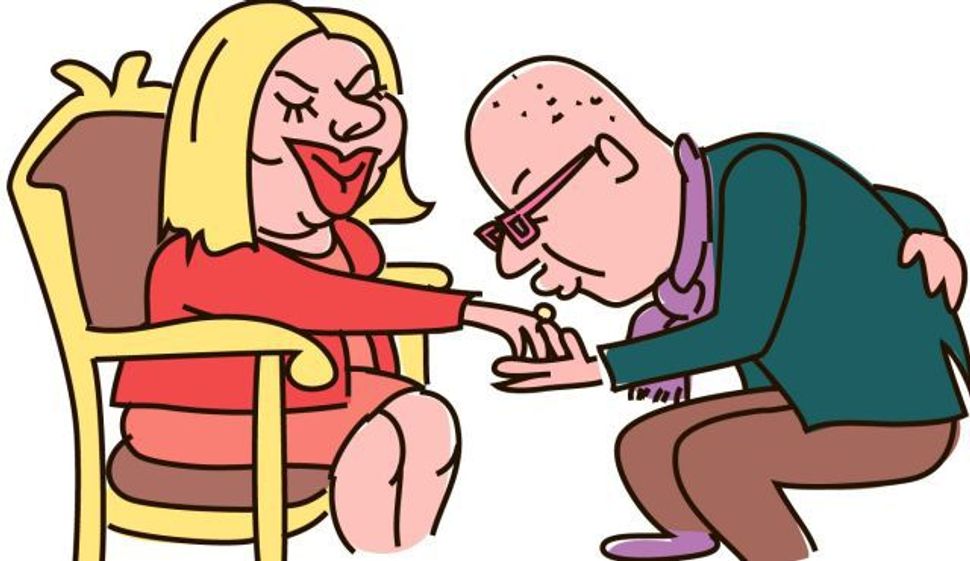 I went to Jerusalem last week to meet the First Lady, Sara Netanyahu. I was hoping to get to the bottom of the serious case of Sara-phobia that has overtaken the country. For a long time now, she has occupied a completely disproportionate role in the public discourse. Whenever I mention her name in conversation, my interlocutor will automatically pull out some recycled bit of derogatory gossip, always presented as having come straight from the source, and recount the story in a near-ecstatic state of excitement and without the humor typical of gossipers: “Get this, I once waited on her table, and she left without paying!” or “I swear, I was their neighbor and I could hear her shouting through the window!”

The phenomenon is familiar from the world of popular religion, in which people will attest, with utter certainty, to the miracles worked by some ordinary Joe or to having seen the Virgin Mary, and their stories quickly gain unstoppable momentum. It was with this same utter certainty that men were once accused of heresy and women of witchcraft, and the mob was not satisfied until the “guilty” parties were burned at the stake.

In “The Barber of Seville,” Rossini has the villainous Don Basilio sings the “La Calunnia” aria, about the calumny that begins as a little breeze, a whisper, a hiss, that softly enters people’s ears, heads, brains, where it spins and grows until it comes out of their mouths full-force and flies off from there, now a mighty thunder, a tempest that causes you to freeze in terror as the sound of cannon fire reverberates in the air, leaving the humiliated victim to be trampled by the masses and killed.

And then a man steps out of the masses to proclaim: I met this woman, the object of all this gossip, and I found her to be very pleasant and hospitable and unusually feminine, by Israeli standards. If I hadn’t been too shy about it, I would have told her that she was an attractive woman. The two hours in the company of this woman that everyone loves to hate flew by, as when you find yourself entranced by a good actress playing a classical role of a queen or a great woman. She played the part for me in a way that left me agape. I found Sara Netanyahu to be someone who has a major presence. Somebody for whom I would gladly trade any number of dull and self-righteous men and women from our public and political sphere.

I was dazzled by her. And little by little, as we sat in facing armchairs for a while, and after the tour of the modest, old-fashioned guest quarters of the prime minister’s residence, I could boil down my diagnosis of why the nation has been overcome with such tremendous Sara-phobia: Within an Israeli political culture that is so lacking in delicacy and manners, the Netanyahus have tried to adopt some of that external glory that Jabotinsky spoke of when he dreamed of a nation that would rival the Italians, and the Europeans in general, in their elegance and fine manners. In the official residences of other prime ministers that I have visited, this dream is something that is taken for granted. Twice I visited the French prime minister’s residence, and saw the luxurious salons, the gilded furniture and all that unrefined folks would call extravagant waste, such as the vast, two-story kitchen.

In France, which is considered one of the most civilized countries, the state bore the expenses of the previous president’s partner (who was not married to him) to the tune of about 2.5 million shekels ($644,147) a year. The cost of maintaining their residence reached levels that in Israel might well have given rise to a special commission of inquiry, at around 60 million shekels a year. Corruption? It’s all a matter of priorities.

Yes, it is this ghost of eroticism that hovers over the world of Israeli politics. This is what is confounding minds, growing and spinning out of control, as in Rossini’s aria, and firing off barrages of rumors — such as that the Netanyahus “don’t really get along” or that she “has him by the throat.” An entire culture rests upon this dirty, despicable thing, this thing that everyone wants to point at and say, “Yuck!” And naturally, somebody has to be there when everyone is pointing and holding their noses. Let it be her.

When she went to the bookcase to show me the children’s book penned by her beloved father, Shmuel Ben-Artzi, I looked at her sadly. At that moment, she seemed like a little girl once more, and I felt her loneliness and longing. If I hadn’t been embarrassed, I would have comforted her, and reminded her that in Rossini’s opera, the good guys win out in the end, and the evil Don Basilio, spreader of the calumny, is sent packing to the sounds of “Buona notte.”