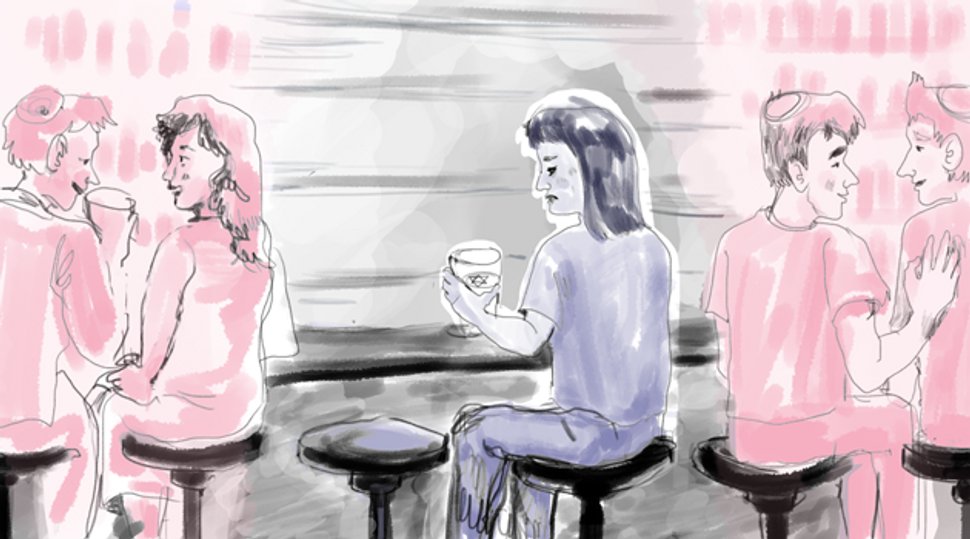 During the periods I’m single, I anticipate with a well-practiced dread for when my mother will rally me to finally meet a nice Jewish girl. There is always the plea for a JDate account, the rare slip of the name of so-and-so’s daughter who my mother thinks is gay and who might be single (and who definitely lives in New Jersey), and the breakneck onslaught of commentary about how it can’t be that hard to meet a lesbian who happens to be a member of the tribe. (“You live in Brooklyn,” she’ll say, as if this is the elixir for her woes.)

Although I am ardently vocal about my reluctance to exclusively date Jewish women — the inherently survivalist practice seems discriminatory in the wake of social progressivism within the last half century — doesn’t mean I’m not open to it. So every time I have this conversation with my mother, my endnote is this: I rarely date queer Jewish girls because there isn’t a particular place — or what is commonly referred to as an LGBT-friendly “safe space” — where I can actually meet them.

LGBT men in New York, as opposed to LGBT women, tend to have these types of spaces available to them more often, however rare they generally are. This is largely due in part to Jayson Littman, the founder of Hebro, “the premiere nighlife group for gay [Jewish men] in New York City,” according to its website. For the uninitiated, Hebro is strictly in the queer party-planning business, with the mission of, “creating a community of gay Jews to celebrate their unique culture and identity,” and “to be able to celebrate being Jewish in a gay space, rather than being gay in a Jewish space.” The majority of their events center around Jewish holidays, featuring parties such as “High Homo Days” and “Sederlicious.” Their Christmas Eve Jewbilee, a queer alternative to the usual singles Matzo Ball, is considered one of the most popular Jew-centric Xmas events in Manhattan. The communal spirit and wedding of LGBT and Jewish cultural identities comes with one flaw: These parties are strictly marketed for the boys, leaving the girls out of the clubhouse.

I first met Littman, the defacto king of Jewish gay nightlife, when I profiled him for the Jewish Week’s NYBlueprint in 2013, and a few months later, he e-mailed me about his next brainchild: jLez. Since Hebro’s launch he has received hundreds of requests to create LGBT female-oriented Hebro. This would mean parties and group outings specifically constructed for queer Jewish women.

However, despite the interest, jLez — the sister company of Hebro for queer women, also conceived by Littman — could not get off of the ground after its online launch. He mostly attributed this to the difficulty in finding a face for the company. “As a gay male, I knew I couldn’t be the face of Jewish women’s parties, but I could certainly manage the operations and logistics,” said Littman. In spite of Littman’s extensive efforts, jLez remains in the form of a website in a distant crook of the internet, half-empty with content.

During our discussion, Littman remained puzzled as to the reasons behind jLez’s current state of purgatory. He questioned the name of the venture itself to questions of whether LGBT women socialize differently than queer men. In many LGBT Jewish events, most people wonder why so few Jewish lesbians are present,” he concluded, “[t]here are very successful lesbian parties in NYC, so there must be a need for it.”

While I found Littman’s commentary to be pertinent, it leant itself to a larger question: how is it that a consistently progressivist, socio-religious cultural group like non-Orthodox American Jewry not address these points in the first place? And why, despite a general alignment with the LGBT Civil Rights Movement, has mainstream Judaism been so staunch in its policy of invisibility of its LGBT demographic? Lastly, why do queer women have a harder time obtaining and maintaining these spaces than queer men?

Part of this conundrum is one that presses the LGBT population in New York City at large. Over the past decade, the number of lesbian bars has significantly decreased; for instance, in contrast to the plethora of gay bars that exist within the LGBT mecca that is the West Village, the only two female-geared mainstays are Cubbyhole, which manages to pack large crowds into its cramped quarters any given night, and Henrietta Hudson, which sometimes drives away potential patrons with its consistent cover charges. Even though the West Village offers “lesbian nights” on Fridays in hallowed locales like the Stonewall Inn and the Monster Bar NYC, it’s a far cry from the dozens of spaces and nights for gay men spackled across the Five Boroughs.

One could argue that predicaments for creating safe spaces for Jewish LGBT men and women — like the ones jLez is currently at odds with — are created by the lack of concern to help curate them on the part of mainstream American Jewry. Most of the larger institutions in mainstream Judaism generally do not engage in discourse regarding its LGBT population unless it is a matter related to halacha — for instance, the media coverage of the Committee of Jewish Law and Standard’s decision to ordain openly gay rabbis and allow same-sex marriages within Conservative Judaism. (This, of course, came with a caveat, leaving it up to individual seminaries and rabbis to decide whether or not they would actually enact this allowance, pointing towards homophobia which, although not as prevalent as in other religions and cultures, astoundingly still exists.) and while LGBT advocacy non-profits like Keshet and non-denominational synagogues like Congregation Beit Simchat Torah are imperative for fostering a Jewish community for queer and trans people, they do not have the same berth as non-grassroots Jewish organizations and staple institutions.

Due to the lack of attention these issues receive of Jewish and queer intersectionality and inclusion are thrown to the wayside. And perhaps this acts as the reason why queer women don’t create these safe spaces for themselves is from this general silence — a silence, which in this case can be construed as a lack, or even a negation, of support.

The American Jewish community is on the cusp of a paradigm shift, as the deluge of pieces written and citations about the 2013 Pew study seem to suggest. In a time when we, as a people, are attempting to maintain our strength, integrity, and sense of heritage in an ever-shifting landscape and evolving definition of what it means to be a Jew in the 21st century, we should making strides to embrace every kind in the tribe, whether they are a person of color, queer, trans, and so on. Some may view Hebro and the stalled enterprise of jLez can be as frivolous after all, they deal in promotional gay nightlife; they are for-profits, while organizations like Keshet are not, which can be potentially off-putting to potential partnerships with other organizations. Then again, The Matzoball, which touts itself as “the nations [sic] leading Jewish single’s event,” and which Hebro’s Christmas Jewbilee is modeled after, was created as a single night only when it premiered in Boston in 1987, and was later picked up by the Society of Young Jewish Professionals as a co-sponsor. For Hebro and jLez, there are indeed precedents — there has just been little mainstream interest. In reality, they are microcosmic examples of a greater symptom: the need for better tools and resources for queer inclusion into the American Jewish mainstream, and the failure of this sole-same mainstream to recognize it.