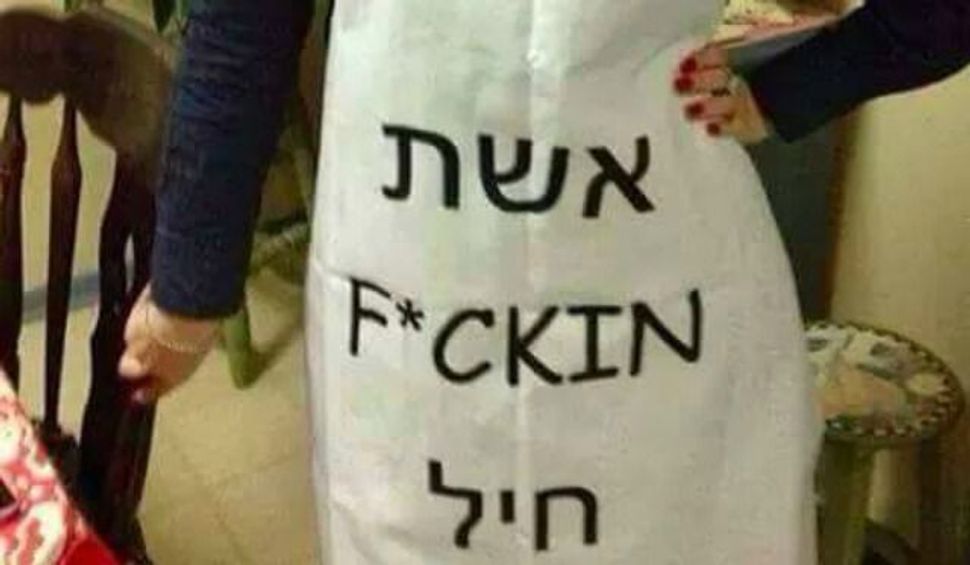 There’s a photo of an apron that’s been popping up in my Facebook feed recently, an apron worn by a woman with her head cropped out of the frame, an apron with big black letters that say: “Eshet F*CKIN chayil” (asterisk included).

When I first saw it I just laughed, struck by the intended dissonance between the F-word (okay, most of the F-word) boldly inserting itself into the middle of the Hebrew term for “woman of valor,” written in Hebrew letters. But unlike most funny-ish Facebook photos, this one stuck in my head after I scrolled down. What exactly was this headless woman trying to say?

In traditional Jewish households, “Eshet Chayil” is probably most familiar as a song many families sing at the Friday night dinner table, just before kiddush. The words are a collection of verses from Proverbs that purport to describe the perfect woman: the most selfless and tireless balabusta of them all, who knows her way around a distaff and spindle at least as well as some of the moms in my Facebook feed know their way around fondant. The eshet chayil described in these passages is the woman behind the man, the one performing the labor that nets him food, clothes and glory (all he does is sit around among the elders of the land, being “known in the gates”).

“The heart of her husband doth safely trust in her, and he hath no lack of gain. She doeth him good and not evil all the days of her life,” Proverbs 31 tells us. “She seeketh wool and flax, and worketh willingly with her hands. … She riseth also while it is yet night, and giveth food to her household.” She’s busy busy busy – and she’s strong, smart and savvy, too, buying a field and planting a vineyard, making linen garments and selling them, and still managing to have a mouth full of wisdom and a tongue full of kindness. In short, she’s Superwoman on speed, and nice to boot.

And that is exactly the wrong kind of role model I want for my four daughters, aged 7 to 22 months.

By using a word that most self-professed eshet chayils would turn their tongues into knots to avoid saying, the “eshet F*CKIN chayil” apron seems to be sending the message that modern-day women of valor are not goody-little-two-shoes 1950s wives meekly doing the dishes and turning out a perfectly browned pot roast. Rather, it is implied, they are empowered women who are taking ownership of a term that for many has implied years of thankless housework.

In the social media age, being an eshet F*CKIN chayil can mean turning drudgery into an art form – not just baking challah but baking rainbow-colored challah for the Shabbat when we read about Noah’s ark or tree-shaped challah for the Shabbat closest to Tu Bishvat, not just slapping some icing and sprinkles onto a birthday cake (or, as I confess to having done, buying a packaged cake from the supermarket that comes with icing and sprinkles already on it) but creating an edible Anna and Elsa to decorate a “Frozen”-themed cake that looks like it came straight out of the Disney studio.

I’m a bit conflicted about this trend, because many of the challahs and cakes I see in my Facebook feed were made by women I know in real life, and I think at least some of them must actually enjoy doing things I would not even consider entertaining the thought of doing. But this isn’t just a single baking genius showcasing her skills (though there’s some of that). It’s become a mass phenomenon, within and outside the Jewish world: a Facebook-fed and Pinterest-nourished culture of making stereotypical “women’s work” as unnecessarily complicated as possible, while simultaneously turning what should be the hobby of a few outliers into a new norm. Once these pretty concoctions are documented and posted online, they are consistently met with exclamation-filled approval, the oohs and ahs of friends echoing the husband’s traditional glorification of his valorous woman – though some of us stay largely silent, seeing the latest birthday cake on our screens and thinking not “Wow!” but “Why?”

When I hear the woman in the apron refer to herself as an eshet chayil, I don’t think of empowerment. I think of a woman who spent Friday making tri-colored soup and grandma’s chicken recipe with an Asian fusion twist, along with kale, quinoa and avocado salad with lemon dijon vinaigrette and sweet potato bourbon noodle kugel, all while her kids played hide and seek between her calves. Then she took pictures.

I told my husband when we got married that I didn’t want to sing “Eshet Chayil” in our home, and I’m glad we don’t (though I have to say the main reason he likes this arrangement is that it hurries us along to the wine-drinking part of the meal). But that doesn’t mean I think there’s anything wrong with cooking or cleaning. In our Orthodox home in Modi’in, between Jerusalem and Tel Aviv, my husband, children (well, at least one or two of them) and I typically spend at least part of every Friday cooking for Shabbat, putting toys and clothes away and washing the floor, though I have no idea when the wax was last coaxed off the candlesticks.

But that’s just it: There is no Superman, and certainly no Superwoman, in my house (there is frequently a Spiderman or a Batman racing around, though). It’s not my job to get us all ready for Shabbat – at least, not more than it is my husband’s. To me, that is the ideal, not this notion that the burden of home and family devolves on one person – one woman – alone.

Sometimes, of course, there isn’t any other adult present or willing to share the tasks that need to be done to keep a home running, and many of us know from personal experience that even in somewhat equitable marriages, the give-and-take occasionally feels like give-and-give. But putting women on a pedestal – or a social media platform – is not the answer, even if we’re the ones putting ourselves there. Far from being the sign of respect for which it is frequently mistaken, putting someone on a pedestal is a means of creating distance, and excuses, in the guise of flattery: She is so incredible that she doesn’t need the help a mere mortal might.

“Eshet Chayil” represents the myth that women not only can do it all but should – and not only do it all, but do it all at the same time, all alone. And that’s not a concept whose praises I want to sing.