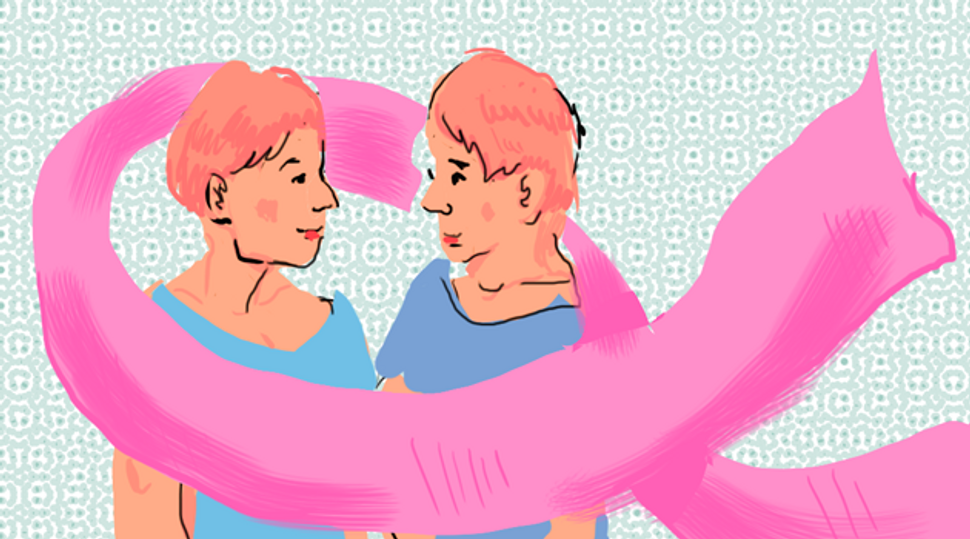 Dozens of Torontonians have gathered to nosh on latkes and blintzes at a downtown café’s weekly Yiddish cabaret. Tables are squeezed close together, and as the performance winds down, my college roommate and I start chatting with our neighbors.

The two women and their pre-teen daughters are out celebrating the girls’ birthdays, and as we move past pleasantries, I learn the women are distantly related but became close when they had breast cancer at the same time. One had a right and the other a left mastectomy. The women joke they can fill a bra only by combining forces.

Sharon Soer’s mother is a second cousin of Annette Cohen’s aunt Aviva’s husband. The women sometimes saw each other at family functions and their kids went to the same schools, but they only became friends in the summer of 2013 when they underwent treatment a few months apart. And just as Annette’s left and Sharon’s right breasts complement each other, the women’s personalities do too. Since meeting, they’ve helped each other cope with mastectomies, radiation, chemotherapy, weight gain, hair loss and having to confront their own mortality while their kids were still in grade school.

“I didn’t want to talk to you when Aviva told me you were going through it,” Annette tells Sharon during our interview. “I was in complete denial… And then Aviva kept telling me, if you don’t call her, it’ll be the biggest mistake of your life.”

Even though Sharon likes her privacy, she shared her diagnosis with her extended family when she learned Annette had breast cancer as well. “As soon as I knew that it would help somebody, I didn’t mind talking about it,” Sharon says.

Following their mastectomies in June 2013, Annette and Sharon met up for lunches throughout the summer but really became friends when they ran into each other at parent-teacher interviews in September.

“Annette kind of broke down and started crying and saying, ‘I can’t take this,’” Sharon recollects. “She was very negative in the sense that she said, ‘What did I do in life to have had this happen to me?’ It really upset me … but maybe you become stronger when you see somebody break down like that.”

After that meeting, Sharon kept following up with Annette and “that was the point when we really connected.”

While other friends tried to lift Annette’s spirits by admiring her chemo-cropped hair, they didn’t understand that the short style, which she never would have chosen on her own, only emphasized her vulnerability. But “I felt when I spoke, Sharon got it because [she] went through it,” Annette says.

The friendship wasn’t always without hurdles. Annette’s focus on the morbid side of statistics was sometimes too difficult for Sharon, who was eating clean and had stopped drinking alcohol in an attempt to maximize her chances at recovery. She was particularly upset when Annette discouraged her from writing a thank-you card to her surgeon. “She goes, ‘Sharon, no! We’re not in the clear yet,’” Sharon says. “And that really upset me––‘We’re not in the clear yet. It’s too soon. Don’t assume anything.’”

Although Sharon thought about avoiding Annette, the women talked it through, and the friendship has since flourished.

“I felt she was good medicine,” Sharon says, later adding that Annette is “a character, so she was really good for me. She made me laugh.”

And because Sharon went through radiation before Annette, she was able to guide her friend through the treatment.

The women and their families have celebrated holidays and birthdays together, feeling comfortable with each other even when they were very sick. “It just felt good knowing we were going through this together,” Sharon says.

But hair loss, nausea and other physical side effects of cancer were only half the problem. After mastectomies, “we are left deformed,” Annette says. “Our womanhood gets taken away.” Adding to post-mastectomy body image issues are weight problems.

“‘I thought you’re supposed to be skinny!’ Do you know how many people have said that to me?” Annette asks.

Both women have gained weight since their treatment, which they attribute to the estrogen blocker tamoxifen that they must take for ten years. Not only does that add to self-esteem issues, it can lead to health problems associated with obesity and, in Annette’s case, has delayed her reconstructive breast surgery.

Confidence, however, can be found in camaraderie. “It’s been over a year that we’ve kept our closeness,” Sharon says. “It’s a bad situation that brought us together but I’m grateful that it did.”