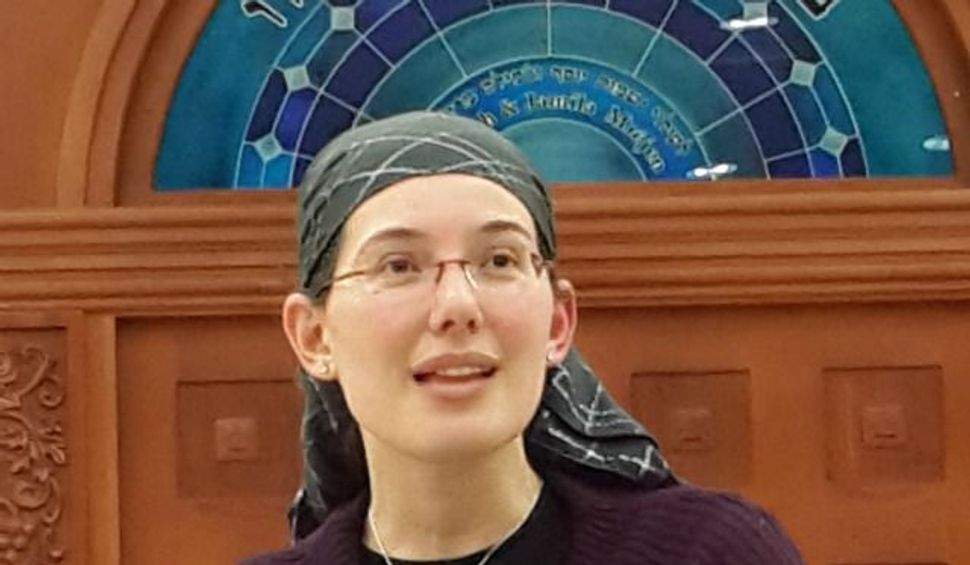 Earlier this month, Dr. Jennie Rosenfeld gave the inaugural lecture for her role as “manhiga ruhanit,” a spiritual leader, to an audience of 60 people at the Mishkan Tzipora synagogue in the Zayit neighborhood of Efrat. One of the first cohort of Jewishly learned modern Orthodox women to hold public positions in Israel, Rosenfeld, 34, who immigrated from New York, has just been appointed to this newly formed role in the Israeli city of Efrat, population 10,000, by its municipal rabbi and founder, Shlomo Riskin.

Dr. Rosenfeld will be answering legal questions that those in the neighborhood wish to pose to her. Her sponsor, Rabbi Riskin was very clear about the validity of this role. “The only reason why women cannot be judges is if they are  not accepted by the people. When it is clear they are accepted and have halachic knowledge, they can  render halachic decisions,” says Rabbi Riskin. Rabbi Shmuel Klitsner, director of the Susi Bradfield Women’s Institute for Halachic Leadership, stated that a ”major success, is having women enter what I call the great halachic conversation, ongoing development of halacha” and added “Talmudic training leads to an ever changing reality.“

The unofficial (i.e. functioning as rabbi but not paid or appointed as such) rabbi of Mishkan Tzipora, Jeffrey Saks, tells me that the size of the audience speaks to how little Rosenfeld’s position is seen as divisive, saying “the modest turnout is a sign that it’s not viewed as terribly controversial or earth shaking, more a sign of evolution rather than revolution.” Rosenfeld’s role in Efrat will be to be available on Fridays to answer questions of Jewish law from Efrat residents and to give the occasional public lecture. Unlike the graduates of Yeshivat Maharat, the New York based school to train Modern Orthodox women for leadership positions in synagogues, Rosenfeld will not be connected with one of the 38 functioning houses of worship in Efrat.   However, the issue could potentially become much larger. Rosenfeld’s current position is being paid for by donors from abroad says Rabbi Riskin. However, if there are 118 city rabbis and 257 town rabbis currently in Israel and half their seats were given to women who had the same knowledge and passed the same rabbinic exams, that could be 187 women acting in rabbinic positions. Rosenfeld is studying in a  five year program, the Susi Bradfield Women’s Institute for Halachic Leadership at Midreshet Lindenbaum, part of Rabbi Riskin’s Ohr Torah Stone institution. In addition to the Lindenbaum program which has already had  two graduates and been in existence for eight years, there is a similar program, Hilkhata at Matan’s Sadie Rennert Women’s Institute for Torah Studies in Jerusalem, whose students are in the second year of their five years of study. Other graduates have taken roles as the spiritual advisors at women’s schools and other similar positions.

Rosenfeld has not had a direct path to her current role. After getting a BA in English at Stern and a master’s in education at Yeshiva University, she received her PhD in English for the City College of New York in February 2008 and subsequently made aliyah with her family, which now includes a husband and three children. She tells me she has always loved learning and knew she would go back to it, so was pleased when the Lindenbaum opportunity presented itself. Rosenfeld is the author of a sexual education book tailored to newly married Orthodox couples, “Et Le’ehov: The Newlywed’s Guide to Physical Intimacy” co-authored with David S. Ribner and published in English in 2011 and in Hebrew in 2013. This book grew out of a project she started at Yeshiva University, with a summer grant from 2005-2008 to create Tzelem an organization whose mission is “to serve the Orthodox community in developing religiously-sensitive materials relating to intimacy and sexuality.”

Though Rosenfeld has learned from many, I was surprised by one person she cites as an advisor and who I would not expect to be associated with a religious woman: Eve Kosofsky Sedgwick. The late Sedgwick who died in 2009 of breast cancer, was one of Rosenfeld’s advisors at CCNY and a cultural critic who did groundbreaking work in the field of queer studies and queer theory and may be best known for her “Epistemology of the Closet,” among many of her writings. Rosenfeld spoke of her debt to Sedgwick as being the ability to “blur the academic and the personal” which was new to her, but that her professor encouraged, as Sedgwick did in her own writings as well. She added that the “personal component” was not something she had “thought to bring to academic work.” Rosenfeld described her class with Sedgwick on Proust as 200 pages of reading a week and, “keeping a journal, writing periodically about what the book did for me in terms of processing relationships in my own life” and that this too, encouraged her to write “in a personal way.” Another thing Sedgwick taught was “myth busting” and that working with Sedgwick was “refreshing” because she was “pushing me to question assumptions I had or define the assumptions I had in a positive way.”

Progress is being made in enlarging the roles of modern Orthodox women in Israel, and with help from some surprising quarters. Nice to know the words of Pirkei Avot of the importance of learning from everyone hold true for Jennie Rosenfeld and this new class of female spiritual leaders.