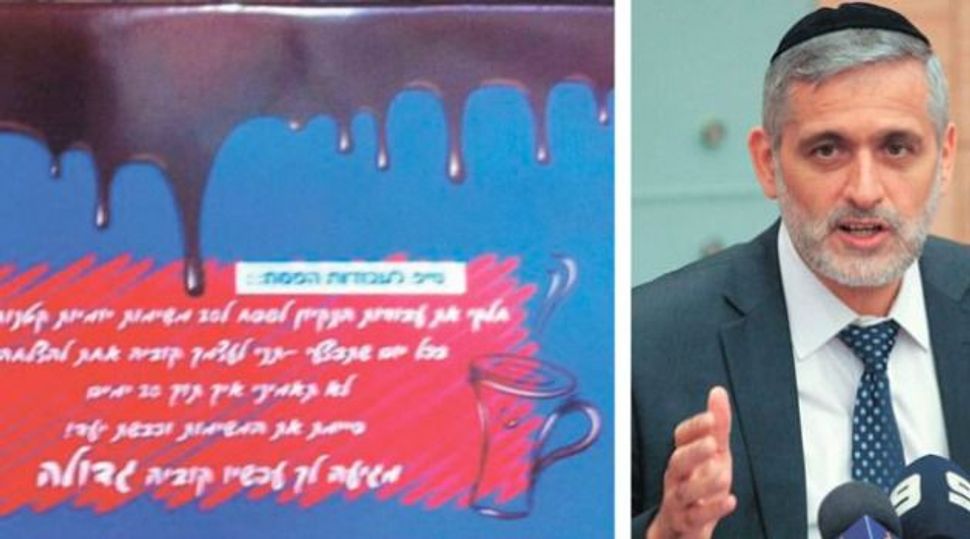 Ultra-Orthodox women activists hoped that perhaps their time had finally come in 2015 – that they would finally be seen and heard by the parties that represent their community in the Knesset.

But just days before Israelis go to the polls, the highest-profile outreach to women by an ultra-Orthodox politician to the women of his sector involved housecleaning tips and chocolate.

The ultra-Orthodox Yahad party, led by Eli Yishai (who broke away from the Shas party), held a campaign rally for its female supporters last week. Yahad, like all of the other ultra-Orthodox parties, not only does not include women on its list, but there are no photographs of women in their campaign posters and other materials. He is, of course, willing and eager to accept their votes, and offered them a goody to encourage them in the form of a chocolate bar. On the wrapper of the chocolate was what Yishai must have considered valuable advice for the women during the countdown to the holiday of Passover, which traditionally is associated with hardcore spring cleaning.

Printed on the wrapper: “Divide your Passover cleaning into 20 individual tasks that are easy to complete. Each time you finish one – reward yourself with square of chocolate. You’ll be amazed how, in just 20 days, how you will have finished everything and reached your goal! That’s when you’ll deserve a really big square of chocolate!”

The gesture infuriated the ranks of ultra-Orthodox women engaged in an ongoing fight for both political representation by women and for the male leaders to engage in the issues that affect them.

One of them composed a sarcastic response to Yishai on Facebook:

“Really? You’re giving me cleaning tips AND chocolate? You shouldn’t have! Now I can vote Yahad happily. After all, who needs female representation in the Knesset or a party that really grapples with issues that affect religious women? Who needs any of that, when finally, someone has shown us support by offering us chocolate!”

The story of the chocolate travelled quickly reactions from across the political spectrum. Zehava Galon, the leader of the Meretz Party, had her own housekeeping tip to offer the Yahad leader : “Eli Yishai – I have a message for YOU from all the women of Israel regarding Passover cleaning – it’s time you participated in it. You simply won’t believe how in just 20 days, it will transform you into someone who thinks twice before he degrades women.”

Yishai was confronted with the female outrage face-to-face on television Saturday night when an angry Channel 2 political correspondent Rina Matzliach asked him how he dared deny women political representation and offer them chocolate and cleaning tips instead. “How low can you go in regard to women?” she asked, charging that he was trying to “buy women with chocolate” and treated them like “housemaids.”

Yishai flailed in all directions to deflect the criticism. First he claimed he planned to distribute the chocolate to men’s events as well – where he said they would get advice on “how to help their wives,” paired with a claim that he personally “did as much, if not more” Passover cleaning as his wife. Finally, he protested that his critics had transformed a gesture that was “positive and sweet” into something that was “chauvinist and ugly.”

To ultra-Orthodox women activists, the condescending chocolate bar was the symbol of all that upsets them. While their leaders interact regularly and respectfully with presumably immodest women who hold leadership positions in other parties, they consistently relegate the women in their own communities to roles of cleaning for Passover and eating chocolate, because public political roles for “their” women would be immodest.

These same ultra-Orthodox women have been working for change in their community. Leading the charge is an energetic group of ultra-Orthodox female activists called “No Female Candidate, No Female Votes.” The group has enjoyed a great deal of publicity – an hour-long news prime time show was devoted to their movement in which they have declared that if the ultra-Orthodox parties remain female-free, they won’t vote.

Many of these activists had pinned their hopes on rumors swirling around Adina Bar-Shalom, the eldest daughter of the revered late Rabbi Ovadia Yosef, the spiritual leader who founded the Shas party. Bar-Shalom is head of the first academic college for ultra-Orthodox women and wife of a senior rabbinical judge. Back in December, when the election was announced, they hoped her uniquely lofty status and clear desire to lead and serve her community might actually result in a place for her as a Knesset candidate, if not on the Shas list, then on the Moshe Kahlon’s Kulanu list.

But soon afterwards, those hopes fizzled, when a defeated-looking Bar Shalom announced support for Shas at an awkward press conference, agreeing to be on a Shas “women’s auxiliary council” well in the background, and stating that the time had not yet come for ultra-Orthodox women to run for Knesset.

Last week, appearing on a panel discussing women and the elections, Bar-Shalom revealed the story behind that decision. The “Cipa” website reported that during the panel discussion Bar-Shalom made it clear that it had not been her decision to forgo a Knesset run. She confessed that her political ambitions had been stymied by certain rabbis and their dealmakers. She said that “as the daughter of a rabbi, I couldn’t do something that would cause dissent.” She said that “their way of dealing with any woman who dared to defy them” by publicly speaking out or running for Knesset on the slate of a party that was not ultra-Orthodox was “to expel her from haredi society.”

If this happens to a woman: “All of her mission, everything she’s done for haredi society goes to waste. I couldn’t allow that to happen to me and so I chose to do what I did.” In short, she wasn’t willing to risk all she had built for the chance of a Knesset seat.

Other, younger women, however, dared to do what Bar-Shalom was fearful of doing and founded a party hoping to add to the pressure to open their doors to women. While nobody expects the Bezechutan party to come close to crossing the electoral threshold and winning seats in the Knesset, their very existence represents a new boldness among ultra-Orthodox women. Last Friday, they won a legal victory when a court ruled that ultra-Orthodox sectoral newspapers could no longer refuse to run their campaign ads – which will hopefully make future political activity more successful.

They can use all the help they can get. If a woman with the stature of Adina Bar-Shalom fears the consequences of stepping out of line, ultra-Orthodox woman without her position and connections must be truly brave to do so. For their efforts, they deserve so much more than a broom and a chocolate bar.