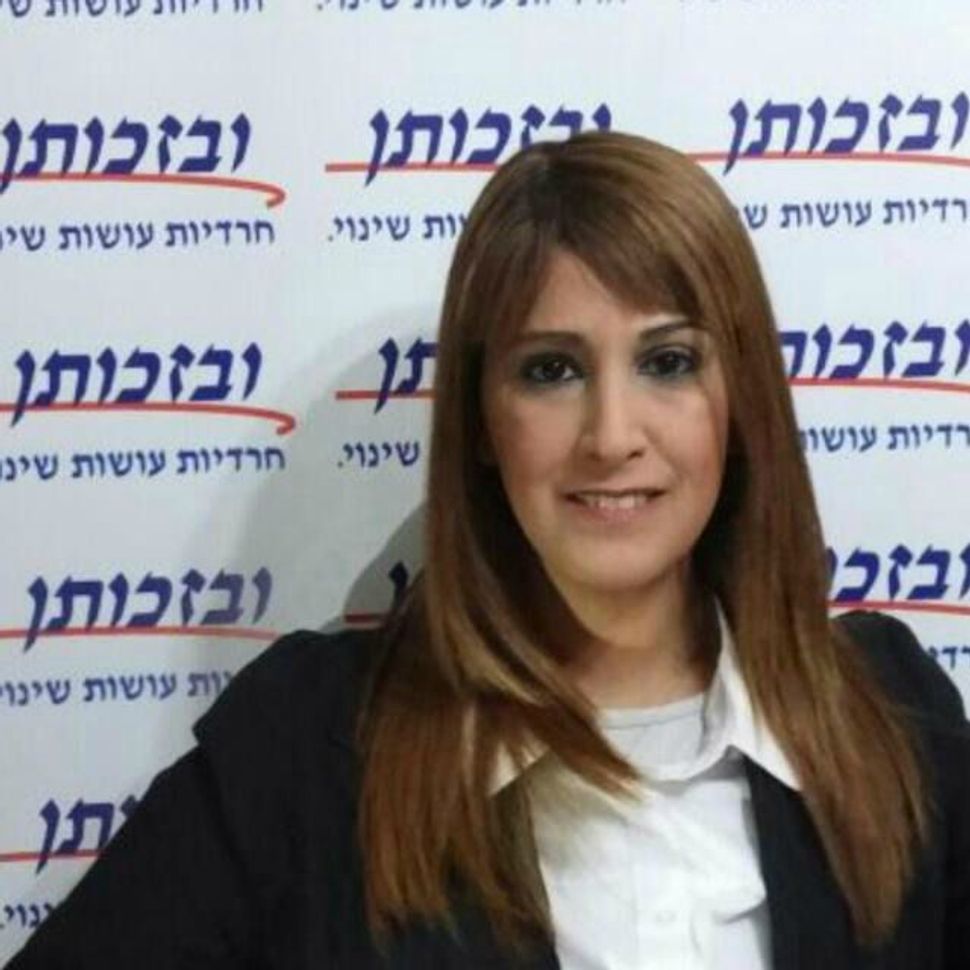 Image by Courtesy of Ruth Colian

In the women’s section of the haredi news site kikar.co, Ruth Colian the founder and and head of the ultra-Orthodox women’s party U’bezchutan — literally, “in their [women’s] merit” — writes about what motivated her to establish U’bzchutan and the choices she has made while under attack from the haredi establishment. (all translations are my own).

I founded U’bzchutan out of a real desire to help the sector in which I live; to demand the rights of tens of thousands of kindergarten teachers, to fight for young women who do not get accepted to seminaries and to fight for each one of them as if they were my own daughter.”

Out of the desire to give women a place to turn to in their distress, to allow the hope that was lost to blossom in their hearts, to give them back their faith. I founded it anew because my sector is undergoing revolutions, and working Haredim need to be represented in the legislative body, and out of the knowledge that the word “Haredi” does not need to be a synonym for “poor.”

Since founding the party in January, the 33-year-old law student and mother-of-four has faced attacks from within her own ultra-Orthodox community. Various rabbis have called for her ex-communication and the Haredi press initially refused to print her ads. On the streets of religious communities she has been called a whore and has had water balloons thrown at her.

She describes a recent “joke”:

Yesterday, someone played a trick on me. They invited me to a panel in Haifa at 5:00 pm because Eli Yishai had canceled on them. They insisted that I take a cab, at the expense of the student union – up to 1,500 shekel – from Tel Aviv to Haifa. Most of panels are arranged by telephone. I got there and there was no one there.

But nevertheless Colian chooses to forgive her detractors:

I was disappointed, and yet, I chose to forgive. I forgive that person who thought it was funny because I understand their fears and concerns. I choose to forgive all those who think I am going against “daat Torah” just because I will not reveal the name of the Rabbi who gave me permission, because these days the world of Torah runs on fear and God’s Torah is unfortunately being held hostage by politic

I forgive everyone who curses me just because I wanted to publicize the very fact of my existence in the Haredi media. I forgive because I judge no one, for good or for bad- God is the judge of the whole world, not me. I chose to forgive, and I chose to hope. May it be Your will, that our choices always reflect our hopes and not our fears.

It’s unlikely the party will pass the 3.25 percent electoral threshold needed to enter the Knesset, but nevertheless this is a monumental step in the fight for women’s equality in Israel.