If Men Cleaned For Passover 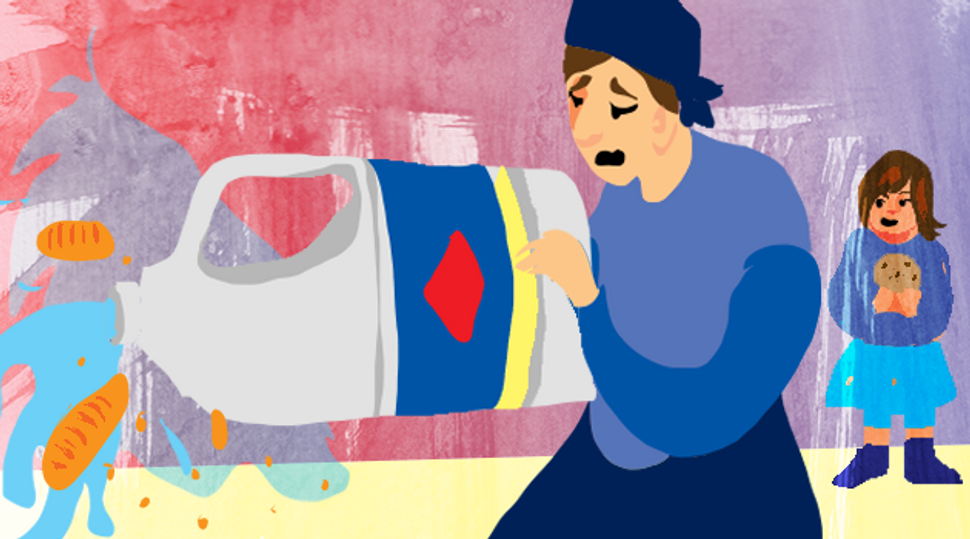 A friend of mine recently suggested that if men nursed babies, there would be no more endless debate among parents about breast versus bottle. Everyone would do what was best for them and their families without guilt, criticism and second guessing.

This made me think about other possibilities. What if men were in charge of Passover cleaning, for example?

In the Long Island Orthodox home where I was raised, Passover cleaning started a month before the holiday. We removed all the books from the shelves and shook them in case a crumb had clung to the pages. Clothing, rugs, windows, desktops, mirrors, cars, garages, bathrooms, the dust that gathered above the closets – all of this got a good scrubbing.

If you’re not weary yet, wait for it because we haven’t gotten to the epicenter. The kitchen is where the party really started. We emptied kitchen cabinets, cleaned them and covered them with new lining. In the days leading up to the seder, we removed plates and silverware from the kitchen and replaced them with Passover sets, along with pots, pans, dish towels, tablecloths, can openers, peelers, whisks and garlic presses that were waiting in a basement closet all year. We cleaned sinks and ovens with boiling water and cleanser. We emptied the refrigerator – everything had to go because if its proximity to chametz – and then lined the shelves to ready it for newly-purchased food, condiments and drinks.

When I say “we” of course I am referring to my mother. My father and my siblings helped her but about 90 percent of the cleaning fell on her shoulders. Other observant homes in our community were similarly beset by the Passover season, its women engulfed by Clorax. Betty Friedan may have left her mark on some of the homes for the other eleven months of the year, but once Springtime came around, the women returned to their domestic domains. If you happened to be a toddler who enjoyed walking around the house with a cookie, you were definitely out of luck.

By the time my mother reached the seder table, she was exhausted. A Jewish professor at Barnard once remarked to our class that Passover was “not really a holiday for the women.” A prodigious understatement.

I was still religiously observant after I emigrated to Israel. A friend of mine set me up on a date with a Rabbi to whom I revealed how much I was dreading Passover.

“The cleaning doesn’t have to be that bad,” he told me. He wasn’t speaking as a Halachic subversive. He was merely interpreting the law in a clinical way – one that didn’t view chametz as ebola.

“Once you wipe a surface with antiseptic cleanser, it’s clean for Pesach,” he said. “Everything else is…unnecessary.”

Everything else, in other words, was neurosis.

I know my mother and her friends weren’t alone in the scope of their Passover preparations. In Jerusalem where I live, once the hamantaschen are gone from the supermarkets, the cleansers come out. On shelves where there were once pita bread and pretzels, there are now bottles of bleach, jars of scouring powder, packages of disinfecting wipes and stacks of Toilet Ducks.

So how did Pesach cleaning become such a colossal and excessive undertaking?

Chametz – wheat and other grains that have been leavened – is associated with impurity. Eating chametz on Passover carries the steep punishment of Karet, or excommunication from the community. Owning chametz is just as bad and punishable which is why Jews sell their chametz to non-Jews before the holiday. Selling chametz, which can be done today online, is insurance against the crumb that might be clinging to the pages of your copy of “The Chosen.” Or “50 Shades.”

Selling chametz also covers the crackers and cereal hiding in orthodox basements and garages. Many observant families don’t actually expel all their chametz from their homes before Passover. Instead, they put it away, considered it “sold” and then take the food out again after the holiday is over and the chametz has reverted to the original owner.

I’m not suggesting this is a hypocritical practice – halachic loopholes and leniencies are a cornerstone of our faith. But the hidden chametz does belie all that excessive cleaning. If you can have a package of Oreos in your home and not violate halacha, then you also don’t need to empty your closets and shake out all your clothing. And yet, rather than lean on the halachic convenience of having sold their chametz, many families go the Passover cleaning distance.

So would men be expected to turn their homes upside down (not to mention be patronized and given chocolate rewards by Israeli ultra-orthodox politicians)? Would it be thus if men had been doing the Passover cleaning these last 2000 years? As we’re Jews, two of us will presumably have three different opinions. I know what mine is.

I haven’t been observant for over a decade but walking into an Israeli supermarket in the weeks leading up to Passover still makes me nervous.

And nostalgic. Passover brings back memories of the stress placed on my mother, but it also makes me recall those covered countertops and aluminum foil-covered refrigerator shelves with love. Leaving orthodoxy is weird like that.

This Passover we’ll be travelling, just as we’ve done for the last three years. We’ll be in Cyprus, where my three-year-old is looking forward to walking around the hotel with a cookie.

Devorah Blachor is writing The Princess Toddler Guide. She also writes humor, essays and mysteries under the pen name Jasmine Schwartz including the novels Farbissen and Fakakt. ᐧ

If Men Cleaned For Passover