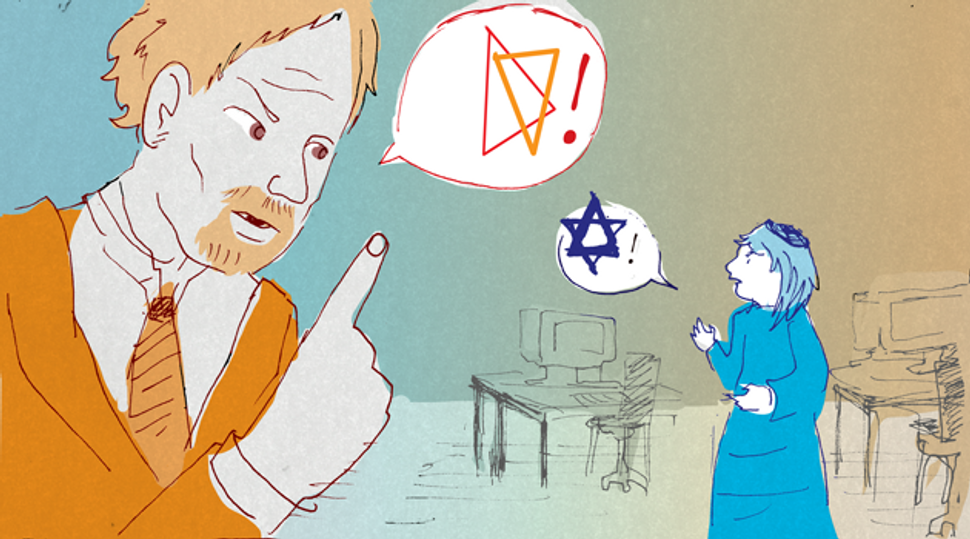 The other day at work, I got goysplained.

Let me back up. In 2008, Rebecca Solnit wrote her seminal essay, “Men Explain Things To Me.” In the essay, Solnit relates a story where she went to a party and mentioned that she had been writing about the famous photographer Eadweard Muybridge. Almost immediately, a man begins talking over her, pontificating that a very important book on the subject was published recently and she should really know about it. The book he is talking about, despite not having read, was the one written by Solnit. Another party guest had to point it out to the man several times before he would acknowledge Solnit’s book, and he didn’t apologize for lecturing her.

Although Solnit herself did not coin the term “mansplaining,” she is often given credit for identifying the phenomenon where men who are less knowledgeable on a topic insist on lecturing a woman who may know more than they do but who is ignored or taken less seriously because of her gender. And thanks to her essay and others like it, I finally have words to articulate the feeling of being condescended to by people who are less informed than I am. That’s why when a non-Jewish colleague at work spent ten minutes explaining Passover to me as if I, a Jew, had never heard of it before, a word immediately popped into my head: “goysplaining.”

A quick survey of other Jewish friends finds that goysplaining, especially about holidays, is not uncommon. “Tamar” reported that her non-Jewish partner’s extended family tells her every year that Hanukkah is “the Jewish version of Christmas,” refusing to hear her point about the holidays not being similar (and Hanukkah being much older). Meanwhile, “Dvora” had a boss who insisted on calling her “Deborah,” as if he believed that she was mispronouncing her own name.

Goysplaining may have its roots, ironically, in a greater presence of Jewish people in the mainstream. I grew up in the South, where there weren’t many Jewish kids at my school. I was often asked questions about different holidays and practices like bat mitzvahs by curious friends and neighbors who weren’t familiar with our customs. Here, the non-Jewish people went straight to the source to get their information, rather than assuming they knew everything already.

Compare that to the recent incident at work, where a colleague insisted that Passover just lasted one night instead of a week (that would be the seder you’re thinking of, bro): I work in a large, diverse Manhattan office where my colleagues most likely have Jewish friends and acquaintances. They’re also more likely to have seen the growing number of Jewish characters depicted in mainstream movies and TV shows, and perhaps to assume that what they’ve seen in pop culture is 100 percent accurate in what it says about Judaism.

Goysplaining is an outgrowth of people thinking that they know a lot about Judaism. Often, they get close — one coworker recently confused “kibbutz” and “kibitz,” which was more hilarious than offensive — and think that because they are “well-educated” and “open-minded,” they’re incapable of making a mistake. The people who goysplain think that because they went to the trouble of reading an article, watching a documentary, or Googling something, they now understand an entire faith and should be congratulated for it.

While it’s easy to dismiss these incidents as just a couple of people being blowhards, they speak to larger issues of representation. Nearly all of the goysplaining that my friends and I experienced came from men. Just as in Solnit’s story, a man’s second-hand information (he read a review of Solnit’s book instead of the book itself; my colleague had once attended a seder) is given greater weight than a woman’s first-hand knowledge (Solnit’s book and her research; my actual Jewishness) simply because he is male and thus his words are worth more. Instead of just going home to kvetch (wait, don’t you mean “kvell”? I met an Israeli person one time) about a goysplaining incident, think about why things like this happen — imbalances of power.

Ironically, goysplaining often comes from a place of respect. I’m thrilled that people are interested in learning about other faiths and that they want to know more about Judaism than just yarmulkes and menorahs. The 10-year-old me still can’t believe that there are non-Jewish people willing to see us as more than stereotypes and caricatures. The vast majority of the time, non-Jews being interested in Judaism and willing to learn about it is a wonderful thing. I’m happy that my colleagues know what Passover is and understand why I might need time off for it without me needing to explain or being accused of “asking for special treatment.” The only problem comes when non-Jews think that they’ve learned enough about the faith to try and tell us we’re doing it wrong, or that they invalidate our life experiences when they don’t match up with what it says in a textbook. Wouldn’t we all rather laugh at Michael Scott in the infamous Diwali episode of “The Office” than be him?

Having more Jews on TV or in your office is a good thing, but having the general public truly listen to and validate Jewish knowledge and experiences is an even better one.