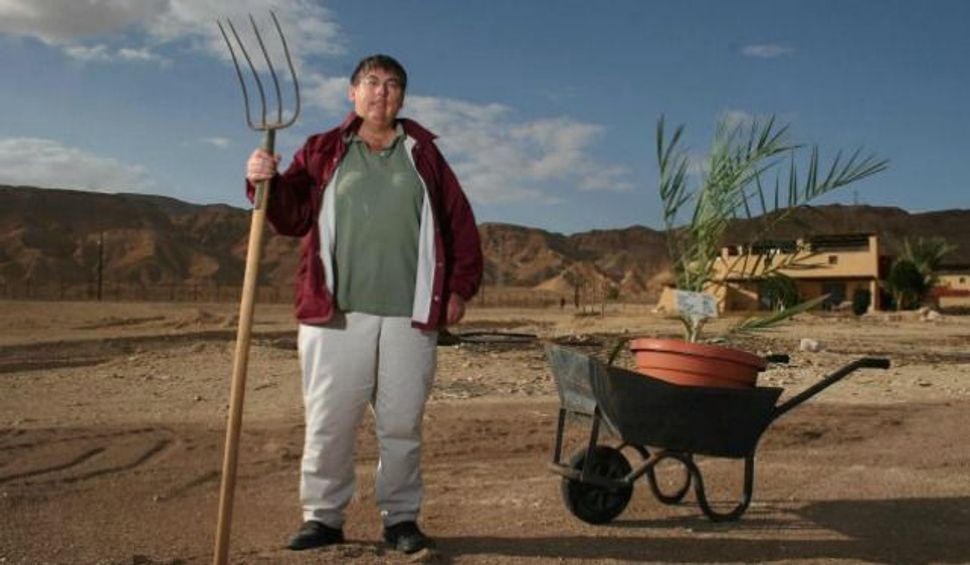 Dr. Elaine Solowey planting a rather younger Methuselah in the ground, 2007. Photo by Dan Keinan

Methuselah, the Judean date palm grown from a 2,000-year old seed, has turned out to be male, and there’s fresh hope he could sire a revival of his extinct species – he’s potent.

Sallon who initiated the Germination of Ancient Seed Program as part of her long term Middle Eastern Medicinal Plant project, works with neighbors – Palestinians and Jordanians – to develop and conserve the medicinal plants in this area. “Plants have no borders,” Sallon points out, and she believes there could be great potential in their medicinal properties.

Methuselah was born of a date seed found during the 1960s excavation of Masada by Prof Yigal Yadin. Sallon obtained it by asking the late archaeologist Prof Ehud Netzer for seeds. “He thought I was mad but he agreed,” Sallon said.

After being examined, photographed and weighed, the seed was taken to Dr Elaine Solowey, a lecturer at The Arava Institute for Environmental Studies at Kibbutz Ketura in southern Israel.

“They gave it to me because I was the only one crazy enough to give it a try,” Solowey says. “I had to think very hard how I could sprout them, because you only get one chance. But unlike the other seeds I got, which were very degraded and which were susceptible to drying up, the date seeds were perfect, they didn’t have wormholes.”

For Methuselah to revive the species, a female of the same species is needed. Other date seeds have been found in around the same area as his seed, but they haven’t yet been completely analyzed.

The wild Judean date palm is considered extinct. Ancient Israel once had magnificent, cultivated plantations of dates, which were highly popular in Rome – and reportedly a particular favorite of the Emperor Augustus. However in the years following the Jewish Wars and the destruction of Jerusalem in 70 AD, the Jews went into exile and in the following centuries, agricultural continuity, which is essential for date palm cultivation, was gradually lost, Sallon explains.

The few remaining in the wild were not cultivated and by the end of the Crusader era, the great date plantations were pretty much gone.

Israel’s date palm population today consists of modern, cultivated species particularly Majoul palms imported in the 1960s from California, which had in turn obtained them from Morocco (with which Israel did not have relations at the time), Sallon says. “We wanted to grow what grew here 2,000 years ago so I called our Methuselah, who was around at the time, ‘the Judean date.’”

Sallon holds hope that the true ancient date may have medicinal properties as the ancients believed, going by pharmacopoeias (medieval encyclopedias that chronicle traditional healing practices). “We actually use the traditional use of plants as a guide what to test them for,” she explains.

Today’s dates are rich in minerals, vitamins and fiber and are said to be good for constipation. Sallon speculates however that the Judean date may have more medicinal qualities, based on their descriptions in ancient medical texts.

Although funding challenges are holding up definitive testing of other ancient seeds, Sallon hopes to continue the research soon. If the team manages to produce a female date plant of the same species from a seed proven to be as old as Methuselah, then it could be pollinated by a male and perhaps reproduce the date trees that once grew in the Jordan River Valley.

For some years, Methuselah was considered to be the oldest seed to have been germinated. In 2012, however Russian scientists reportedly grew a 32,000-year-old seed buried in Siberia that had apparently been buried by an ice-age squirrel.

It is perhaps ironic that today’s Israeli dates hail from Morocco via the United States. For ancient Israel, the date palm was a symbol of prosperity and historic connection to the land of Israel and its image was imprinted on ancient coins. Today it appears on the modern Israeli 10-shekel coin and who knows? One day Methusaleh’s offspring could be growing again as the date once did, in the stony deserts of Israel.