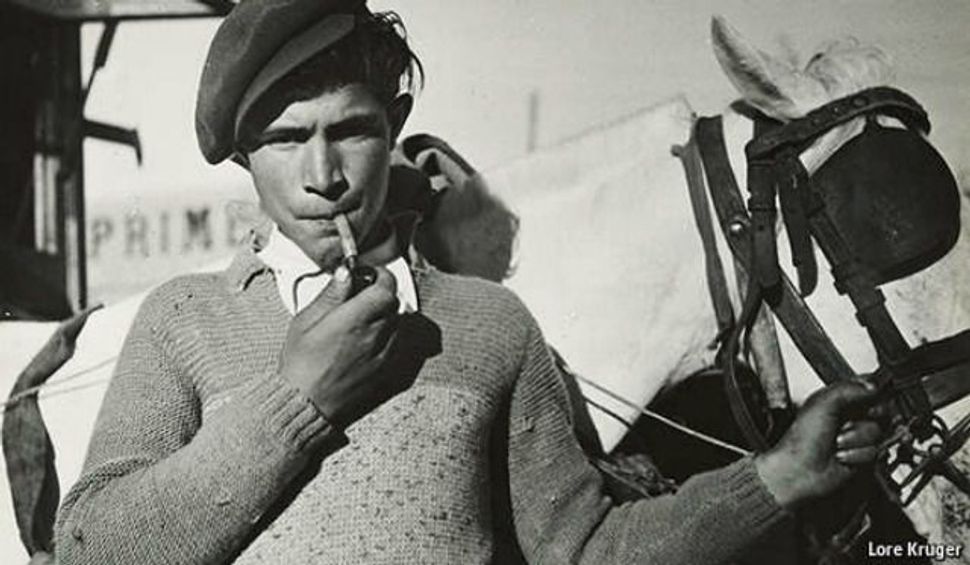 BERLIN – This city’s Willy-Brandt-Haus is currently showing an exhibition of the U.S. street photographer Vivian Maier, who gained fame only after her death. At another venue in the city, meanwhile, the work of an artist who could be called Maier’s local equivalent is on display: The photography museum C|O Berlin is holding the first-ever retrospective of the German-Jewish Lore Krüger. Called “A Suitcase Full of Pictures,” the exhibition – which opened in January and is scheduled to close on April 10 – is a hot topic on the Berlin art scene.

Krüger, like Maier, died in 2009. And both artists left behind a visual record of great talent that went largely undiscovered during their lifetimes.

The fact that Krüger (née Heinemann), through her photographs, focused on a dark time in history was tied indirectly to her own biography as a Jewish refugee who fled Nazi Germany, became a Communist agitator, documented with her camera the historic shifts of a shattered Europe in the 1930s, and continued her artistic work and political activism after fleeing to the United States in 1941. But when she returned to Germany after the war, she left photography behind. All that was left of that early love was a suitcase filled with some 250 photographs that she brought with her, and on which the current exhibition is based.

The 100 or so photographs in the exhibition were taken in the decade between 1934 and 1944, and they suggest the directions Krüger might have taken had she not abandoned the camera, according to Felix Hoffmann, the cocurator of the exhibition on behalf of the C|O Berlin Foundation. “Ten years, 10 turbulent and dramatic years, moreover, is rather a short time to develop as an artist and to find out what one wants and is able to do,” Hoffmann wrote in the exhibition catalog. Nevertheless, he finds in her work the aesthetic influences of the Bauhaus, the “New Seeing” movement, cubism, Dada, surrealism and even Russian constructivism. Yet on the other hand, he sees an acute social and political sensitivity, reflected in her photographs of Gypsies (also known as Roma), and of laborers and political exiles.

Lore Heinemann was born on March 11, 1914, in the central German city of Magdeburg, the first child of Ernst Heinemann, an engineer, and the former Irene Rosenbaum. For her 10th birthday, her father gave her a simple camera. In 1932, she began working as a stenographer in a bank. However, about a year later, after the Nazis came to power, she was forced to leave on account of her Jewish background. Her parents and sister fled to the Spanish island of Mallorca and she to England, where she found work as an au pair and began studying photography. But in 1934, she joined the rest of her family after failing to obtain an extension of her visa.

She continued her photography studies in Barcelona, and in 1935 moved to Paris – like so many other refugee European artists and intellectuals. Among the figures she became friendly with were two who lived in her building: the philosopher Walter Benjamin and the author Arthur Koestler. It was in Paris that she became serious about the twin paths that would determine the course of her life in exile – Marxism (she enrolled in courses in dialectical materialism taught by the Hungarian sociologist Laszlo Radvanyi, the husband of author Anna Seghers); and photography. She studied with the photographer Florence Henri, who had studied at the Bauhaus in Dessau with László Moholy-Nagy.

When the Spanish Civil War broke out in 1936, she joined the effort to support the Republican and Communist cause, and also met her future husband, Ernst Krüger, who fought in their ranks. She visited her parents in Mallorca while battles were raging on the island, and it was only with great difficulty that she was able to return to France.

Her photographs from this period contained many avant-garde touches, showing the influence of Henri. These included the use of multiple exposure, and surprising compositions of objects such as phonograph records, kitchen implements, carpets and African masks. They also included delicate games with light and shade. She also experimented with photograms (photographic images made without a camera by placing objects on photographic paper and exposing them to light, creating surrealistic hallucinations). But unlike Henri, Krüger was driven to venture outside the studio to capture the outside world with her camera – the sad, inescapable reality of poverty in the streets and in gloomy homes.

Among other things, she shot street scenes in Paris: poor people resting on the banks of the Seine; construction workers finding a moment of respite on a pile of bricks; as well as the impressive “Gitanes” series from 1936, documenting members of the Sinti and Roma communities in the south of France in a number of situations – a man shaving; toddlers in wagons; a teenage boy with a horse; a nursing baby; a boy hoisting a jug of water; and old people whose faces are mapped with wrinkles. In one particularly heartbreaking picture, a Roma toddler with a prominent birth defect on his face reminds viewers of the political context of the era – both the Roma and people with disabilities were persecuted by the Nazis.

“When you read these lines, we will no longer be alive,” Krüger’s parents wrote at the top of a letter they sent to her and her sister, Gisela, in July 1940. (The letter is displayed in the Berlin exhibition.) The Franco regime cooperated with the Nazis; the Mallorca police detained the pair of Jewish refugees and demanded that they leave the island immediately. The parents, realizing they did not have time to obtain foreign visas, decided to kill themselves.

Krüger and her sister also suffered during the war. After the German invasion of France in May 1940, they were imprisoned in an internment camp, fled to Marseilles using forged papers and after a long wait were granted visas to Mexico. The ship was seized by the Dutch army, and they were sent to a British internment camp in Trinidad. In June 1941, they finally reached New York, where Lore and Ernst married and where their first child, a daughter, was born.

In New York, Krüger opened a photography studio, where she specialized in portraits. Her subjects included prominent German exiles in the United States, such as the author and publisher Alfred Kantorowicz and Kurt Rosenfeld, a socialist politician and former Prussian justice minister who had been the defense attorney of Marxist theorist Rosa Luxemburg.

The Krügers helped found the anti-fascist newspaper The German American, and Lore Krüger worked there until 1944. Among its prominent writers were Bertolt Brecht, Heinrich Mann and Lion Feuchtwanger.

Even though many of their German friends – as well as Lore’s sister – remained in the United States after the Nazis were defeated, the Krügers decided to return to the homeland in 1946. Explaining their decision, Krüger wrote, “Who should bring about a change in Germany … if not German anti-fascists everywhere in the world, if they didn’t return?” Because her heart had been damaged by a bout of diphtheria, she decided to stop doing photography. The couple settled in East Berlin, where Lore gave birth to their son, and after the country was partitioned they became residents of communist East Germany. Krüger became an English-to-German translator for the Aufbau Verlag publishing house, and some of the books she translated are in the exhibition: “Robinson Crusoe,” “The Adventures of Tom Sawyer,” “The Adventures of Huckleberry Finn,” and books by Doris Lessing, Joseph Conrad and Henry James.

When Krüger was already advanced in age, her son suggested an exhibition of her photographs of her time in exile, but she died on March 3, 2009, and did not live to see the exhibition. In addition to the photographs, books and documents mentioned above, the show includes a 35 mm camera she owned and a memoir she wrote late in life. In it, she set down the humanist message that was the guiding light behind her artistic endeavor, writing that photography should bear witness to the common bonds among people.