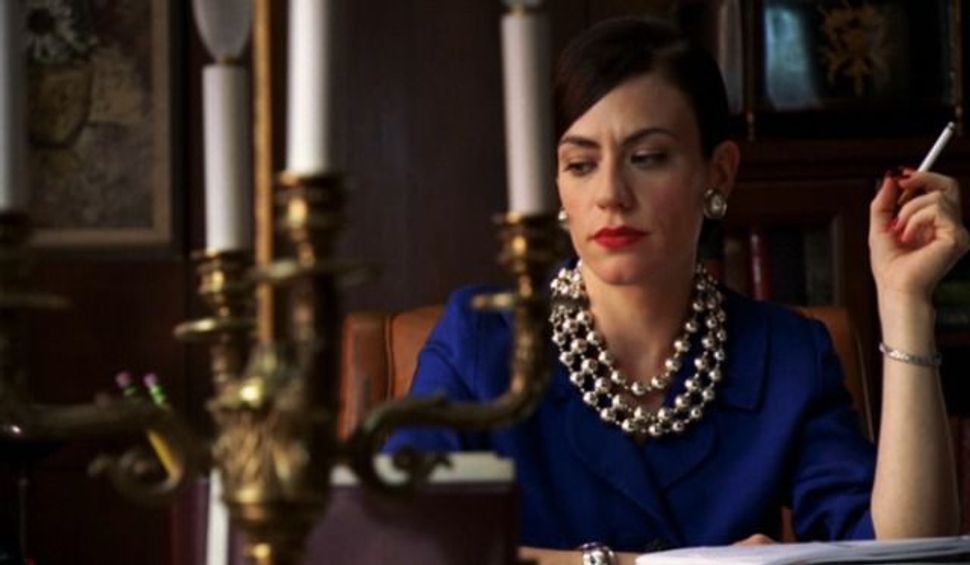 Is Rachel Menken the ‘One Who Got Away’?

“Mad Men” is a show about reinvention and regret. Our hero, Don Draper, pulls himself out of an abusive, impoverished childhood and becomes a successful ad man on Madison Avenue. He has it all, yet he always wants more.

Season 7 (Part 2) of “Mad Men” opens as Don is in the throes of his second divorce. He is back to cavorting around the city with Roger Sterling, and apparently juggling so many women that he’s hired a service just to manage all of their calls. Of course, any dedicated “Mad Men” viewer knows all too well that this parade of women doesn’t amount to happiness for Don Draper. They’re distractions, sure to give way to the torment lurking just beneath the surface of his polished veneer.

As anticipation for the final season of “Mad Men” built, so did the question of who would appear in these last episodes. There have been so many characters weaving in and out of the narrative over the years, many of them women in Don’s life. Midge, Suzanne, Bobbie Barrett, Dr. Faye, Sylvia — each affair meant something different to Don, because each represented something about his character and the way he saw himself at that time. And no affair meant more to Don than his brief time with Rachel Menken.

When we meet Rachel in Season 1, she is hiring Sterling Cooper to re-brand her father’s department store, Menken’s. Menken’s is old, reliable, and Jewish, and Rachel wants more for it. She wants higher-end, glamorous customers, Jewish and non. She is demanding and forward thinking. She runs every meeting she’s in, convincing her father and the men at Sterling Cooper what’s right for the business. It’s made clear that she has chosen work over marriage, and that she gets great satisfaction out of her job. Audiences fell for this smart, independent woman right away, as did Don.

Of course, Don falls for many, many women. Rachel turns him down when he suggests they fly away together, correctly guessing that Don is just trying to escape his life. Rachel isn’t willing to leave her family and her work, and she balks at the idea that she may just be a pawn in his half-baked plan to run from his problems. And yet, when asked who fans most often lament as “the one who got away,” series creator Matthew Weiner cites Rachel Menken.

Any fan hoping for the return of Rachel Menken gets their wish in this week’s premiere of the final season: she appeared before Don in a fur coat, a striking, welcome sight. Then we’re dealt a series of blows: Don is dreaming, and Rachel has died. When he appears at her Shiva, Rachel’s sister tells him that Rachel “had everything,” as her children and husband appear in the background. The subtext here is of course, “Rachel had everything, and she had it without you.” Don blew it, and now he can’t ever win her back. That door has closed, once and for all.

So why is it that Rachel so strongly resonated with audiences, and what’s the significance of her reappearance and death? Sure Rachel was beautiful, but so are all of Don’s women. She was a career woman, like Dr. Faye and Bobbie Barrett — nothing too unique there. She was Jewish, but so was Roger Sterling’s second wife, Jane.

Like Don, Rachel dealt with Otherness her whole life. Unlike Don, she was born wealthy. And yet, she is different from, say, Betty in the way she wears her wealth: Rachel knows that her father worked hard for his money, and that she owes her lifestyle to his ambition. Her mother died in labor, and she and Don bond over their difficult childhoods. That’s an important part of Rachel’s appeal: chic and clearly of means, Rachel never seems to take her position for granted and continues to work hard for her family business when one imagines that she could easily live as a spoiled housewife. Rachel is grounded and practical, and she remains the only one of Don’s girlfriends to reject him.

Though we (and Don) learn that Rachel marries member-of-the-tribe Tilden Katz after moving on from Don, she resonates so strongly with viewers that the show’s creators see fit to bring back her character with just a few episodes left in the series. Why? To let us know that Don has never forgotten her. To confirm that two divorces and countless affairs later, Don still thinks of what might have been with Rachel, had he done things differently. At her traditional Orthodox Shiva, we see Don glimpse once again the mysterious link of comfort, family, and faith that Rachel’s Judaism represented to him.

Interestingly, there are several historical precedents for the character of Rachel Menken: Sally Milgrim, Carrie Marcus Neiman, and Beatrice Fox Auerbach all ran successful midcentury department stores. I thought of them while watching clips of Rachel and Don touring Menken’s as women in fathered hats and elbow-length gloves bustled by. Retail allowed these women to assume positions of power at a time when there were very few business opportunities afforded to women. It’s a fascinating corner of Jewish women’s history, one I’m glad “Mad Men,” in all its brilliant period specificity, has explored.

Did Rachel Menken Find What She Was Looking For?

I, too, was thrilled at the return of Rachel Menken on the Mad Men Season 7 Part 2 premiere. The pleasure was all too brief, however, as it was soon revealed that Rachel had died. Tara described Rachel as “the one who got away,” and I’ve always felt that she was the one who got away from the viewers as much as from Don. From the moment we met Rachel, I wanted more of her — she was smart and elusive; beautiful and guarded; speaking her mind but in some way holding the viewer at arm’s length.

I’ve been re-watching the first season of Mad Men in anticipation of the show’s finale (though I’m still in denial that it’s really coming to an end!), and I have been delighted to rediscover Rachel Menken and to recall just how Jewish that first season really was. In fact, it reminded me that during the first season — before we learned about Dick Whitman — there was a popular conspiracy theory that Don’s secret was that he was Jewish! While that seems implausible and somewhat naive now, it further demonstrates how much Matthew Weiner has made Jewishness a metaphor for Don’s sense of otherness and dislocation. Season 7 Part 2 begins with Don firmly in control (at least on the surface). In just the first couple of scenes we see him in the director role at work and seemingly casually sharing stories from his childhood — something we never would have imagined just a few seasons ago! And yet, even at this moment, Rachel Menken reappears, like an apparition of Don’s lost self.

To me, Rachel’s appearance in this episode signaled not only Don’s romantic lack of fulfillment and the sense that she was “the one who got away,” but also his lingering feeling of not belonging, of being different. Of course, his experience at Rachel’s shiva only reinforced this feeling — though he knew well enough to bring a cake, he didn’t belong there, as Rachel’s sister sharply reminded him and the others, cutting off the invitation to help make a minyan, while Don looked longingly into the room of Rachel’s family and friends.

I love the Jewish-woman-as-embodiment-of-the-show’s-theme not only because I love the character of Rachel Menken but also because it captures one of my favorite ways to approach Jewish women’s history: to look at how the historical narrative changes when we see the story from their perspective, when we place Jewish women at the center. Of course, Rachel was never really at the center — she’s more of a foil for or symbol of Don — but her experience as a doubly marginalized yet privileged character becomes a scrim through which to view Don’s character and experience.

One of the unanswered question for me about Rachel Menken is whether she really did, as her sister insisted, find everything she wanted. I wasn’t sure how to read the scene in Season 2 in which Don bumps into her and her husband, Tilden Katz. It’s clear she’s made a decision to choose the life she was supposed to want: marriage, and to a fellow Jew. But it was not clear to me whether we were supposed to infer that she was happy with this decision or whether she had settled. When Barbara tells Don, with some angry satisfaction, that Rachel “had everything she wanted,” are we meant to believe her, or doth she protest too much? Was Don, to Rachel, “the one who got away”?

And I’m also left with the question: will Rachel appear again on the show, or has she once again gotten away from us, too?