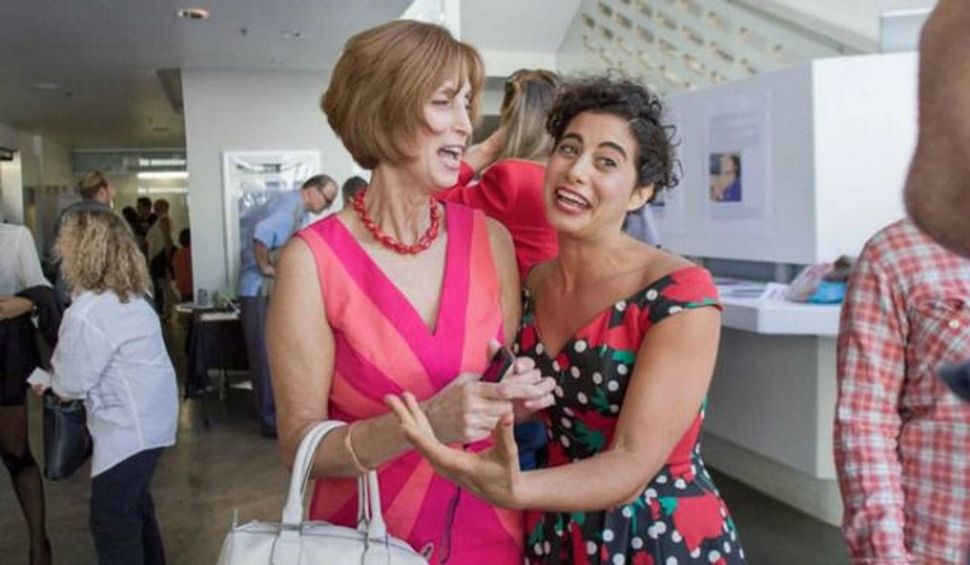 (JTA) — In an early episode of “Dude, Where’s My Chutzpah?,” the 2013 docu-comedy web series by Jessie Kahnweiler that put her on the comedic map, Kahnweiler’s character ends up at the barrier separating the West Bank from Israel. She had asked a taxi driver to take her to “the Wall.”

The character, Jessie — the comedian’s amped-up, disinhibited alter ego — approaches a woman standing in the shade. “So this is the Wailing Wall?” she asks, referring to the holy site at the heart of Jerusalem’s Old City, but pointing to the concrete wall shrouded in barbed wire that divides the Palestinian village of Bil’in. “Is this where I put my note?”

When the woman points out the Israeli soldiers standing guard, Jessie begins to flirt.

“Shalom!” she calls out, with a smile and a wave. And then: “Can I have diet tear gas? I’m kind of trying to watch my weight.”

It’s an early version of what has become Kahnweiler’s trademark: a clueless Jewish girl is inserted into places (the West Bank, skid row) and encounters issues (rape, bulimia) of great import. Her obliviousness calls attention to privilege and injustice, and the results are as radical as they are hilarious.

In this sense, her latest web series, “The Skinny,” about a “feisty, free-spirited Jewish girl named Jessie living, loving and trying to overcome an eating disorder in Los Angeles,” is classic Kahnweiler. The Kickstarter-funded “bulimia dark comedy,” as Kahnweiler calls it, is expected to premiere on Wifey.tv — the Internet channel launched by Jill Soloway (the creator of the Amazon series “Transparent”) and digital entrepreneur Rebecca Odes.

“It has to be rooted in emotional truth to be funny,” Kahnweiler told JTA. “It’s about being really self aware. Who we are and who we want to be and what’s stopping us, and that is the space I want to play, in that gap.” 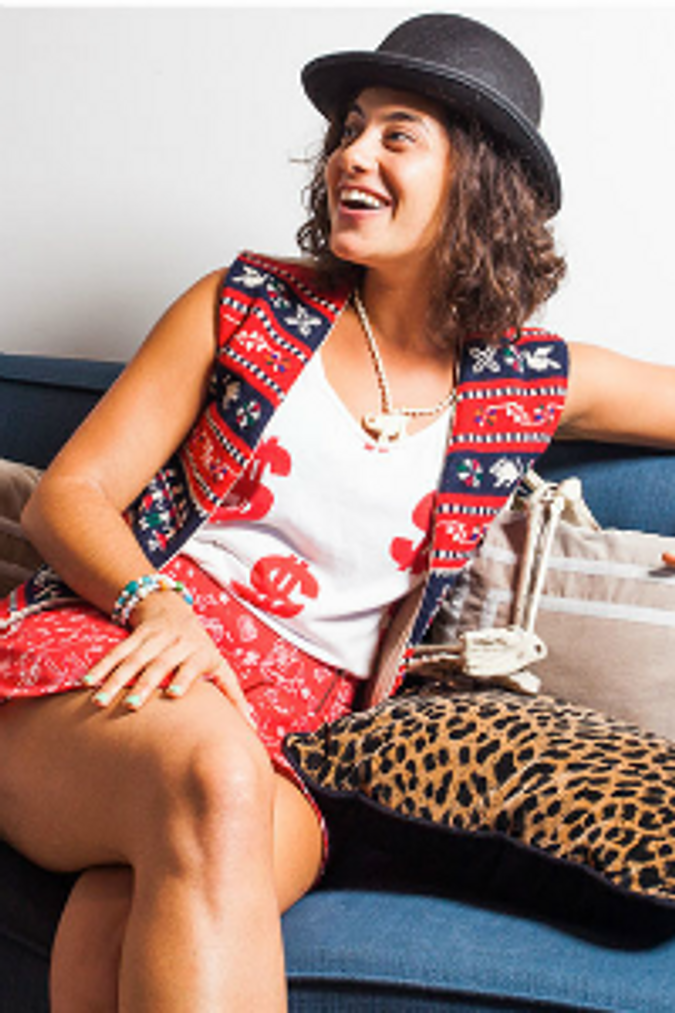 Kahnweiler, 30, is quickly shaping up to be a comedic force, the enfant terrible of urban Millennials who dares to say what everyone else is secretly thinking. Kahnweiler, who fittingly tweets @shesgotchutzpah, gives voice to the disavowed anxieties and night terrors of a generation. But in a voice that is distinctly her own. Driving her work, she says, is the constant question: “How do I make something that only I can make?”

The Atlanta-raised Kahnweiler lives in Los Angeles “with my plants and my cats.” The spark that attracts her to the city is the same spark that animates her work — a deep and abiding respect for contradictions.

“There’s a really big tension in Los Angeles because it’s so beautiful, the sunshine is repressive to a point,” she said. “It’s like you’re not allowed to cry, it’s so beautiful. And there’s this whole element of Hollywood and this presentation and this facade, and then there’s this underbelly of all of these cultures coming together that exist in one place but are also very segregated. This tension of what’s real and what’s not, I really thrive in that.”

But when I met Kahnweiler (and her mother and grandmother) recently, it was on Manhattan’s Upper West Side, where her spry, flame-haired, 94-year-old bubbe lives.

“I’d come more, but my grandmother is really busy,” Kahnweiler said over wine, crackers and salmon spread. “It’s like, when can you fit me in?”

“Not so!” her grandmother, Lucille Boretz, protested laughing. “Not so!”

Kahnweiler hails from a family of writers. Her grandfather was the celebrated TV, film and radio writer Alvin Boretz; her grandmother was his beloved companion and soundboard until his death in 2010.

“He went against the grain then,” explained Kanhweiler’s mother, Jennifer. Boretz was a freelancer, and money was often tight. “So we always had the message as his daughters, my sister and I, that you need to love what you do and you need to make a contribution, and we hopefully passed that on.”

Jennifer Kahnweiler, also a redhead, is an accomplished writer in her own right whose books include the best-seller “The Introverted Leader: Building on Your Quiet Strength.” She and Kahnweiler’s father, Bill — a professor at Georgia State University — both have doctorates in counseling, and even wrote a book together about leadership in the workplace. (“It was really fun to be at home when that was happening,” Kahnweiler joked.)

“My dad is a really big wise-ass, he’s really sarcastic, he has a really dry sense of humor,” Kahnweiler said. “And Mom has no filter. She’s never made a joke in her life, and she’s the funniest person.”

Jennifer and Lucille burst out laughing.

Kahnweiler also has a sister, a nurse practitioner who lives in Denver.

In general, it was an open home where Jennifer says they talked about things. “Except that, there was stuff we didn’t talk about, that we didn’t know about that’s come out in Jessie’s work,” she said. “It’s really hard. I’m not going to lie about it.”

She was referring to “Meet My Rapist,” Kahnweiler’s most influential video. The plot of the widely-acclaimed 2013 piece, based on events that happened to Kahnweiler, revolves around a woman played by Kahnweiler who encounters the man who raped her five years after the fact at a farmer’s market. He begins a silent, mammalian haunting of her character’s life, and the film chronicles her attempts to discuss what happened with her family and friends. (“But were you like really raped? Were you drunk? Was he cute? Was he white?”)

But for Kahnweiler, using comedy to work through difficult issues is a familial trait.

“There’s so much tragedy in life,” Kahnweiler said. “But the way we process as a family — and I think this is a very Jewish thing culturally — you laugh at things, just at the absurdity of life. I was raised that way. What else are you going to do? I would kill myself.”

And she sees her work as a calling.

Kahnweiler first started making documentaries in college at California’s University of Redlands, and says it has always been a very personal experience, whether she was working on a piece about truck drivers or ex-boyfriends or veterans. In a way, Kahnweiler’s body of work is exactly what you might expect from the granddaughter of a TV writer and two Ph.D.s: excellent comedic writing and, beneath the surface, an abyss of insight and analysis.

“The Skinny” has been on her mind for years, Kahnweiler says, but she struggled with how to make a comedy about an eating disorder. She finally wrote the pilot and started shopping it around.

“I was going to the big meetings in Beverly Hills that I’m sure Grandpa went to,” she recalled, “and you pull up and there’s valet parking, and it’s very exciting, and you come away and you’re like, ‘They want to change everything.’”

She considered doing things “their” way, but she was always being pressured to make the main character more likable, a desire Kahnweiler just couldn’t accommodate.

“Every person I know is both horrible and amazing,” she said. “Male characters can be dark and complicated and heroes, but women, it has to be wrapped up in a pretty, likable package.”

So she decided to produce “The Skinny” herself.

Kahnweiler’s art focuses on living with contradiction rather than resolving it. “I was a feminist with an eating disorder,” she explained. “That is such a paradox. The same with [‘Dude, Where’s My’] ‘Chutzpah?’ — I’m in Israel, but there’s Palestine.” But the contradictions are fertile ground for the young comedian.

“What’s so exciting about female filmmakers is we embrace it, those are our narratives,” she said. “We’re not linear, we’re round. We’re very complicated, women are.”

And then she laughs, adding, “I have no idea what I just said.”