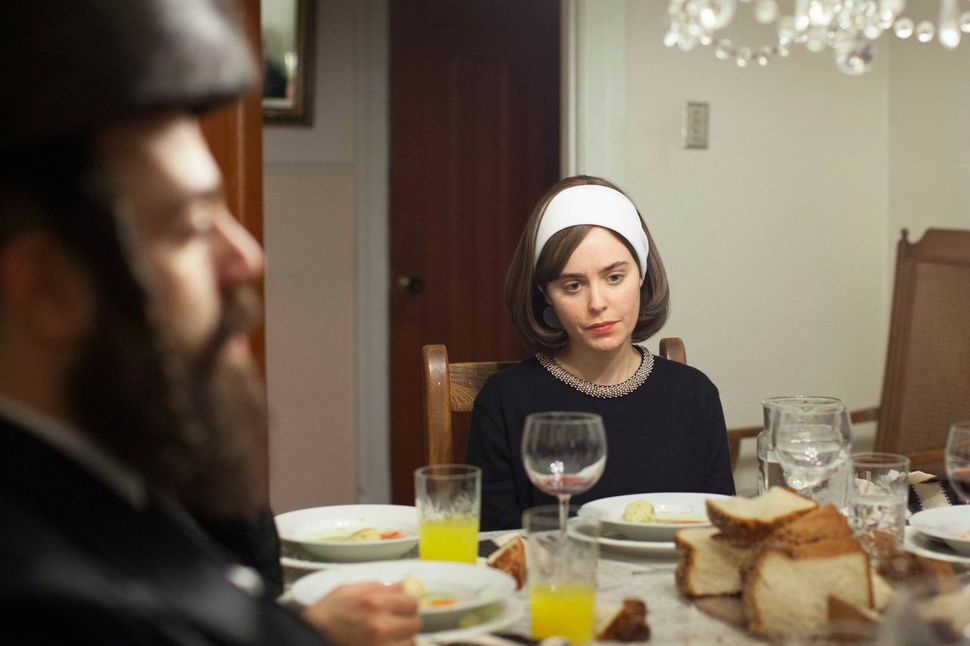 In the 2012 Israeli film “Fill the Void,” winsome actress Hadas Yaron played Shira Mendelman, a young Hasidic woman who (spoiler alert) marries her dead sister’s husband. Her portrayal of a religious girl in turmoil made such an impression on the international film community –– she took home the Volpi Award for Best Actress at the Venice Film Festival––that it almost completely destroyed her chances at playing the Hasidic heroine of “Felix and Meira,” opening across the US this week.

“I definitely had hesitation about playing a Hasidic woman again,” says Yaron, now twenty-five. Writer and director Maxime Giroux also worried that audiences would find the casting repetitive. “I actually didn’t want Hadas in the movie specifically because she was in Fill the Void, to be honest,” he told the Forward in January. Producers reached out to her without his knowledge, he said, but both Yaron and Giroux eventually concluded that despite initial hesitation, she was the right actress for the part.

Yasher koach to them both for that. Yaron’s performance as Meira, an unhappy housewife who falls for an aimless French-Canadian man-child, is a feat of restraint in this quiet, measured love story set in Montreal’s answer to Williamsburg. She deftly embodies the role of a woman raised to value modesty above all, whether it’s avoiding eye contact with men or sheepishly avoiding conflict with her husband. Undoubtedly Yaron owes some of her fluency in Haredi culture to her experience working on “Fill the Void.” For that film, Yaron, who was raised in a secular family in Tel Aviv, immersed herself in the study of Orthodox life with the director Rama Burshtein as a guide. A ba’al teshuva whose film treats the religious world affectionately, Burshtein took Yaron to meet rabbis and members of the community in order to get to know the lifestyle from the inside. “Talking to them, being a guest at Shabbat dinners and on holidays,” Yaron says of her crash course in Jewish observance, “just getting to know real people and not stereotypes.” Yaron’s view of the religious world was rosy as a result of this experience. “I understood a lot of the traditions and mitzvahs and what stood behind it, and it made me completely fall in love with these people and their way of living, so connected to their inner selves.”

While “Fill the Void” is something of a valentine to Hasidism, “Felix and Meira” explores Meira’s dissatisfaction with her insular community and her narrow role as mother and wife. Audiences –– undoubtedly a majority secular –– will view the baby steps Meira takes away from her cloistered world as “progress,” but Yaron was slow to see it that way. “At first I noticed this automatic objection rising in me,” she says. “I felt the story was judging Hasidic life and as I had just come from a very specific and profound point of view; it was difficult for me to realize that in a way I had become a bit closed-minded.” To undo her preconceptions, Yaron spoke to Hasidic women leading double lives; she also listened to the stories of her costar Luzer Twersky, who grew up religious in Brooklyn but became secular in his early twenties. “I had to understand how it felt to live this kind of life, and slowly drift away from it, losing the belief on which one grew up.” Eventually she came to view Meira’s journey as one of “bravery,” and says she admires her character. “She gave herself the opportunity to try and fail, to make mistakes, because she is inquisitive and wholly in touch with her feelings.” Still, Yaron says her previously favorable view of the Hasidic world hasn’t been entirely upended. “This is a whole and complex world and in it are a lot of different stories,” she says. “I relate to both [characters] not necessarily in terms of religion, but in terms of the human story.” It’s a good reminder to us all that while it can be tempting to view Meira and Shira –– indeed, at any two individuals –– as the same because they share some similarities, it’s a mistake to imagine their inner lives are identical, and their fates should be, too. Shira and Meira are both Hasidic women, but their similarities begin and end there.