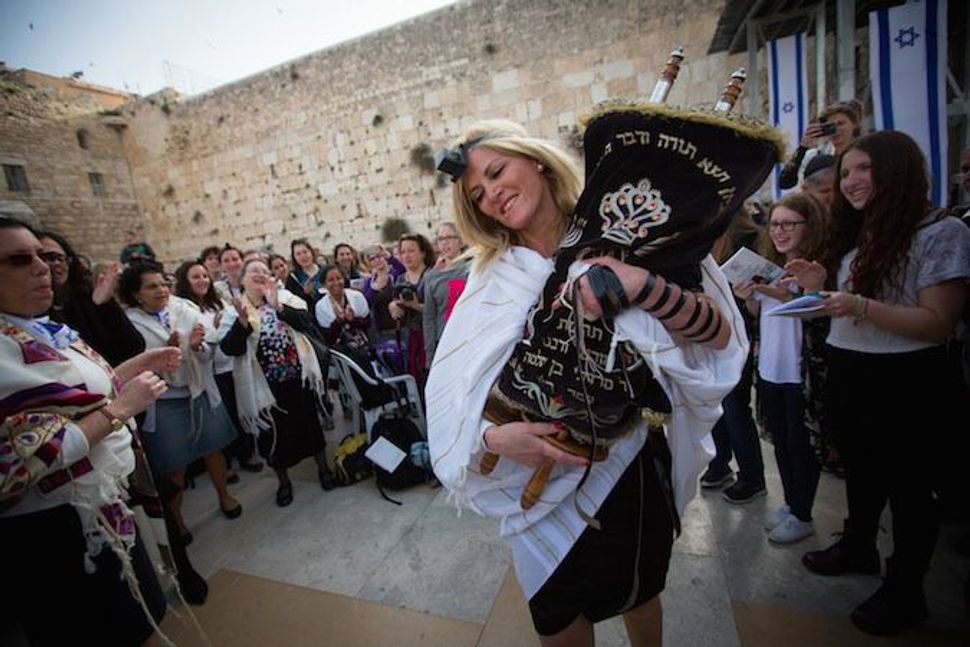 Women of the “Women of the Wall” organization dance with the Torah scroll as they attend their monthly prayer services at the Western Wall in Jerusalem, April 20, 2015. Image by Miriam Alster/FLASH90

(JTA)- A man was trampled. A raucous protest broke out, restrained only by police. The Western Wall’s mechitza — a partition between men and women considered sacrosanct — was breached by those who ostensibly care about it most.

The brouhaha that erupted yesterday at Women of the Wall’s monthly service brought back memories of the violence the group suffered in 2013. Month after month, crowds of haredi Orthodox Jews packed the plaza to block out the women’s section, with a small minority hurling stones, eggs, coffee, water and Nazi-themed epithets at the women’s prayer group. A second women’s group formed to galvanize opposition to Women of the Wall.

Now the brawls are back. This time, violence broke out after male supporters of Women of the Wall passed a full-size Torah scroll into the women’s section of the Kotel, allowing the group to read from it for the first time ever. Haredi Orthodox men knocked down and trampled the man who passed the scroll, and broke through the mechitza in a failed attempt to stop the women from reading Torah.

For Women of the Wall, this is a double victory: Not only did they read from a proper Torah, they also drew renewed attention to Western Wall Rabbi Shlomo Rabinowitz’s 2010 ban on Torah scrolls in the women’s section. While the Wall boasts more than 100 Torah scrolls, they’re all on the men’s side, preventing women from using them and making a full women’s holiday service next to impossible. If this incident creates enough pressure to remove Rabinowitz’s ban, it will be a win for Women of the Wall.

But really, Women of the Wall won its war two years ago. For decades, the group’s prayer was prohibited, its activists were detained and arrested, and their cause became a rallying cry for liberal Judaism — especially in the United States. But that ended in April 2013 when a Jerusalem district court judge ruled that their services were, in fact, legal.

Overnight, the police switched from the praying women’s arresters to their protectors, surrounding them with a cordon. The mass protests that followed the court ruling — while dangerous and disturbing — were just trying to forestall the inevitable.

And as those protests faded away, Women of the Wall’s issue faded from the public agenda. The group’s challenge, as Chairwoman Anat Hoffman told JTA after the ruling, became “taking yes for an answer.”

Since then, the group’s calls to remove the Torah ban haven’t gotten as much attention — even as the women succeeded in reading from a miniature, but still kosher, Torah scroll they smuggled in.

Sunday’s incident shows that women still don’t have equal rights at the Wall and that Women of the Wall’s supporters face physical harm. It also put the group back in the public eye. But no matter what happens next, Women of the Wall will still be able to conduct a worship service each month at the Western Wall — the goal the group pursued for decades and achieved two years ago.