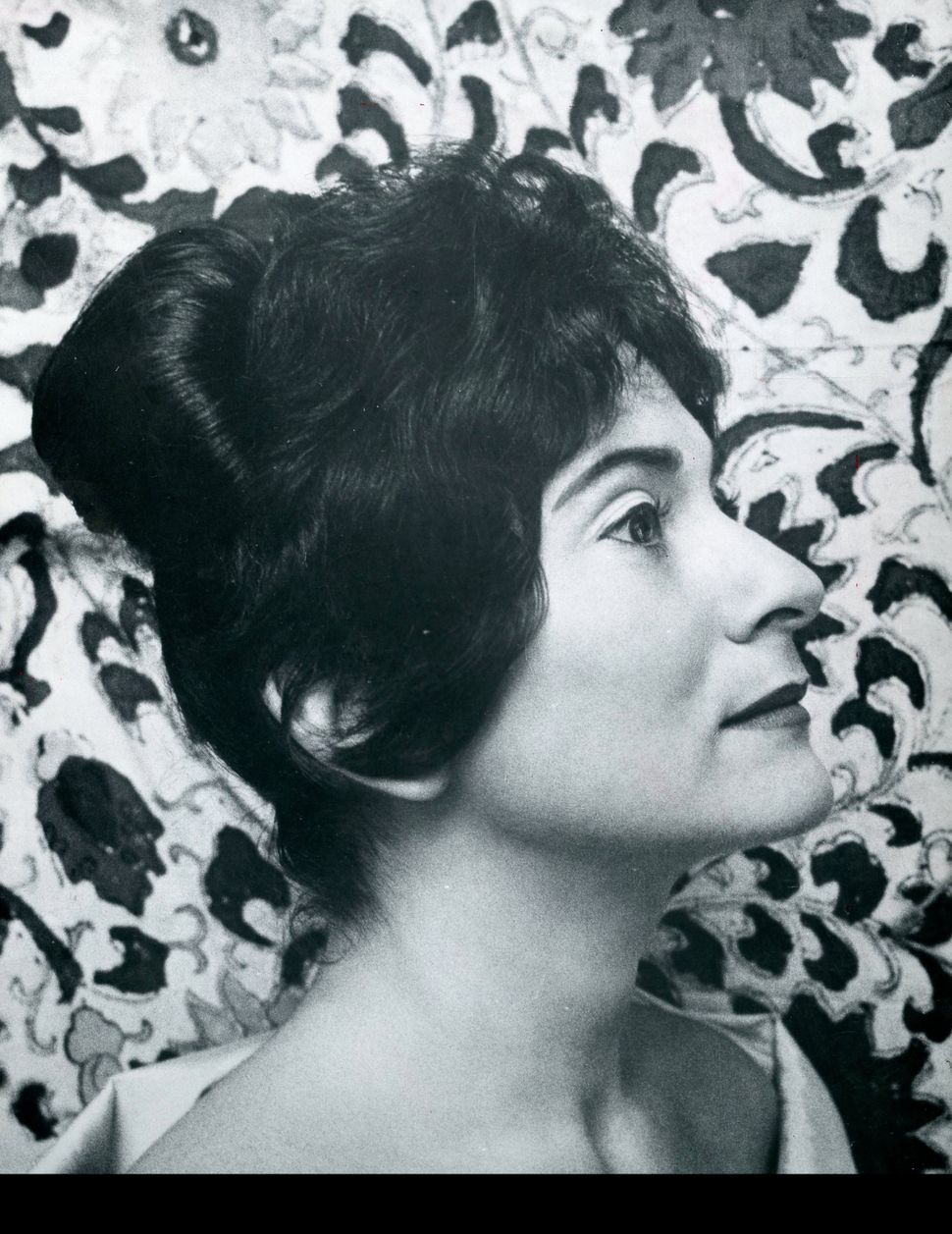 In the November 1960 Friday issue of the Forverts, a mere few days before Kennedy was elected President, this striking side profile image of Naomi Newman was published in the festive Theatre Music and Movies section announcing the week’s critical performing arts news. And there atop page 10, facing an image of darling cantor/opera star Jan Peerce performing the role of Rudolfo in the Metropolitan Opera’s ‘La Boheme,’ was the enchanting headshot of the ‘young soprano who would be appearing Thursday evening at the Carnegie Recital Hall.’

Further down that page, past the latest opera news, beyond sweetheart composer Sholem Secunda’s (noted for the Andrews’s Sisters and later, Ella Fitzgerald’s hit song “Bay Mir Bistu Sheyn”) feature about Shostakovich’s Boris Gudonov and after Herman Queens’s (most likely a pseudonym) gossip/news feature ‘Heard and Seen,’ was news of Newman’s upcoming performance—as well as a bit about her Yiddish connection—her “yikhes.”

‘Naomi Newman Makes Her New York Debut’ was the headline. ‘Naomi Newman,’ it forged ahead making the Yiddishland connection—‘daughter of the Director of the Yiddish Culture Club of Los Angeles, makes her New York debut Thursday evening at Carnegie Recital Hall.’ ‘She is a young singer,’ it wrapped up, ‘a soprano.’ Newman had been concertizing for some years by then, including a Bastille Day event at New York’s acclaimed jazz venue the ‘Five-Spot,’ featuring Alvin Novak as accompanist on piano. And Novak’s yikhes included being affiliated with the New York School group of artists including poet Frank O’Hara. Newman’s singing career included a benefit concert sponsored by the Hudson Guild Neighborhood House, and the Young Adult Group of the Society for Ethical Culture—both progressive groups favored by New York’s Jewish residents, among others, and devoted to helping impoverished inner city residents and new immigrants thrive.

The Carnegie Hall concert featured a unique mixture of songs for Cello and voice by American composer Ben Weber, and more poetic pieces for voice by Schumann and Poulenc. Weber’s admirers were said to include art song composer Ned Rorem and classical composer Aaron Copland. The “yidish nakhes” portion of the concert could be said to have been represented as well by the inclusion of Ravel’s ‘Melodies Hebraiques’ that draw on Jewish musical folk motifs—appropriate for the artistic scion of Los Angeles’s Yiddish Culture Club—known for its intellectual heft as a beloved home for Yiddish writers and artists of the West Coast.

While Newman continued concertizing including throughout Europe singing Mozart and 20th century composer Milhaud, with stints in Rome and recording for RCA—the changing times perhaps influenced her artistic path—which led to television. Television roles found her guest starring on “Star Trek” as ‘Lieutenant Rhada’ who was of Indian ethnicity, the popular “Wild Wild West” and even “Ben Casey” — and as a series regular on “Korg 70,000 BC” — a show that purported to be about the struggles of your average Neanderthal mishpokhe.

But Jewish theatre can be said to be where she truly found a home, having co-founded in 1978, the award winning Bay Area group A Traveling Jewish Theatre where she achieved acclaim as actor, artistic director and playwright. Notable for solo shows, Newman fearlessly debuted original works including a piece about German Jewish poet Elsa Lasker Schuler titled ‘Berlin, Jerusalem and the Moon,’ which toured throughout the country, and the unparalleled merging of themes in Old Jewish & Queer.

Comparable to Newman’s musical artistry which distinctively sought out the modern, her work with ATJT remained thematically radical, the power of which, along with that striking early photographic portrait in our archive, remind one of the Yiddish saying: Di gantse velt shteyt af der shpits tsung. [There are moments when the entire world seems to rest on the tip of the tongue.] Perhaps that is derived from the verse in Proverbs — “Death and life are in the power of the tongue. And those who love it will eat its fruit.” And who, if not the audacious actor, knows the full capacity of the word.

Also, today: George Decker, organist, St. Paul’s Chapel, Columbia University, noon; Naomi Newman, soprano, and Elijah Bennett, baritone, in a benefit concert sponsored by the Hudson Guild Neighborhood House and the Young Adult Group of the Society for Ethical Culture, Public School 33, Ninth Avenue and 27th Street. 8:30. 1964 feb 6 Margaret Webster’s production café society will have celebrate Bastille Day a day in advance on July 13,when lyric soprano Naomi Newman of New York and East Hampton features a group of French songs in a program of many languages at the Five-Spot Cafe. Miss Newman’s accompanist, Alvin Novak, a concert pianist, will present Arnold Schoenberg’s “Six Little Pieces” as a solo. The program at 5.30, is part of the chamber music series at the café. Miss Newman who was trained at the University of California and in Europe, has sung leading roles in Mozart, Menotti, Carpentier, and Milhaud operas. She has recorded for RCA.