Why Did Orthodox Mayor Kill Bar and Bat Mitzvahs for Disabled? 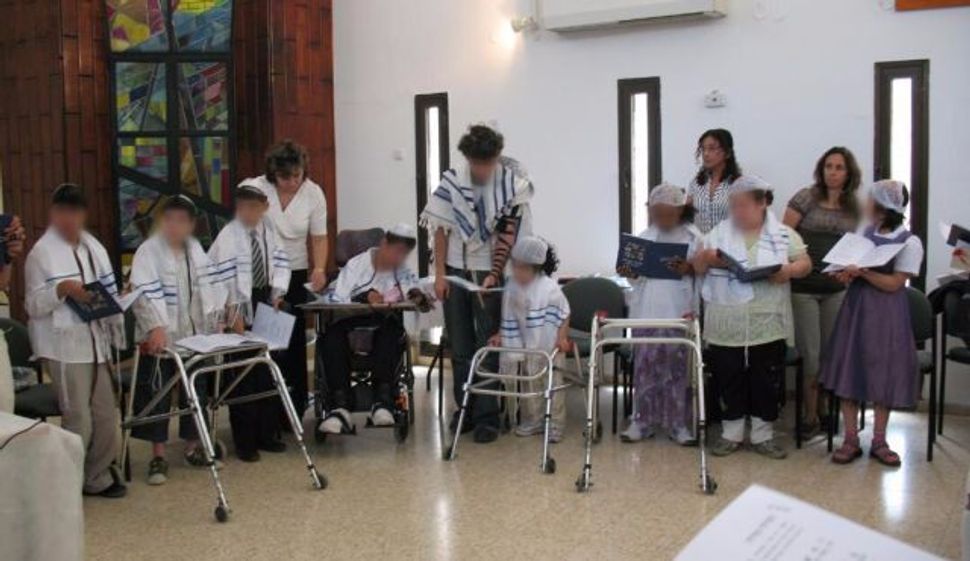 At the event I attended a few years back, four boys and girls, dressed in their finest clothes, most in wheelchairs, others standing and walking, guided by family members took their place in front of a packed synagogue. During the ceremony, their fingers were gently guided to an iPad at the appropriate times and the blessings for the Torah were “recited” for them. At the end of the proceedings they “paraded” around the room with the holy scrolls, and afterward, the congregation danced around them in celebration.

As most of the children were non-verbal, it was hard to tell what effect the ceremony had on them, but most seemed to have a definite glint of excitement in their eye, enjoying being at the center of attention. What was much clearer to discern was the happiness and pride of the parents and other family members. Standing next to the children they dedicated their lives to caring for, many wept with joy at the ability to celebrate a bar or bat mitzvah they likely never dreamed could happen. I confess that while I was there intending to view the goings-on with a cold journalist’s eye, tears were streaming down my cheeks as well.

Even in the contentious Israeli stew of religion and politics, with ongoing efforts to delegitimize non-Orthodox streams of Judaism, it seemed unimaginable that any politician could use these special needs children and their devoted families as pawns in their power games.

The dishonor of being the first politician to stoop that low goes to the mayor of Rehovot, Rahamim Malul, who took it upon himself to forbid the school from bringing four autistic bar mitzvah boys to a local Conservative synagogue during school hours for their ceremony scheduled for Thursday.

The Conservative movement in Israel, known as the Masorti movement, has been offering these ceremonies to disabled children for more than 20 years. Participants range from mildly to severely disabled. Working in cooperation with the public schools for special education, they offer an optional program for them to study and prepare – at whatever level they are able, to have some form of an “aliyah” (ascent) to Judaism’s holiest book.

The ceremony I witnessed was notable in its diversity – there was an Orthodox family, their son in a black velvet kippah sitting next to a girl who was wearing a prayer shawl (tallit) – an unusual sight in Israel. While Israeli schools are divided into secular, Orthodox, and ultra-Orthodox and Arab streams, the demands and limitations on resources means that special education institutions are often far more diverse environments. As a result, the Conservative movement has had to tread carefully when offering its unique program to these schools. They do so only with the full endorsement and cooperation of the school principals, and no child is required to participate – it only happens with the support and blessing of the families.

Generally, the service is appreciated and embraced by communities in which it operates as a “mitzvah” (a good deed). The program first began and has flourished because it fills a void – the vast majority of Orthodox authorities consider these children exempt from religious obligations because of their conditions, and since they aren’t capable of a full-fledged bar mitzvah, no ceremony usually takes place.

In Rehovot this week, Malul contended that holding the fully optional ceremony in a non-Orthodox synagogue (the mayor and his spokesperson repeatedly referred to the congregation as being Reform though it is, in fact, Conservative) represented “anti-religious coercion.”

The timing of the ultra-Orthodox politician’s maneuvering was particularly cruel. Though fully aware of the program – which took place last year in the city – he saved his objections for the last moment, when the boys were full of excitement on the eve of an event for which they have been preparing over the past year.

The rabbi in Rehovot set to officiate the bar mitzvahs, Mikie Goldstein, posted on Facebook Wednesday that “after spending an emotional morning with the four bar mitzvah boys, whose excitement ahead of the ceremony was very noticeable, I was struck with shock when I heard from the director of the movement’s program that the mayor had cancelled the ceremony.”

As Judy Maltz reported in Haaretz, the city, at the last minute, then tried to pressure the program into various “compromises” that would make the ceremony possible – if it was moved to an Orthodox synagogue, to prevent female participants from wearing ritual garments, or if the prayers were changed in a manner acceptable to Orthodox Jews. The Conservative movement refused to change the content of its service.

One final last-ditch compromise proposal failed – holding the ceremony in the late afternoon after-school hours, so as to avoid the appearance of it being an official school function. The Conservative movement was agreeable, but they boys’ parents nixed the idea, worried that their autistic children would be unable to function at that hour. One of the parents also would not have been able to attend.

Rabbi Goldstein said in his post that disappointment was deep and that the boys, their families, and the Conservative congregation in the city “have been greatly upset by the unacceptable and callous intervention of the mayor … our community believes in the co-existence of our city’s various sectors, side by side. However, we cannot be silent when our religious freedom is trampled upon.”

He concluded by asking, “Is it truly possible that Israel is the only state in the free world in which there is no freedom of religion for Jews?”

Is it? In a depressingly fitting manner, the same day this story broke, Prime Minister Benjamin Netanyahu’s government signed its coalition agreement with the ultra-Orthodox party United Torah Judaism, bowing to the ultra-Orthodox on a long list of issues of religion and state. This paves the way to a government in which the Reform and Conservative movements will surely feel as unwelcome nationally as they are in Rehovot.

So it seems the answer to the rabbi’s question is, sadly, yes.

Why Did Orthodox Mayor Kill Bar and Bat Mitzvahs for Disabled?